HTC was Microsoft’s most ambitious partner at the original Windows Phone launch, and the company has a similarly strong line-up now that Mango is on the scene. The HTC Radar is a 3.8-inch WP7 Mango handset with a WVGA display, 1GHz processor and a design that’s reminiscent of the Flyer or an ironed-out Legend. We grabbed some hands-on time with HTC’s Radar to see whether or not it should be on yours.

Build quality, as we’ve found with all of HTC’s unibody devices, is strong and creak-free. The lower white panel slides off to reveal the battery and SIM card slot, and there’s a dedicated camera key, microUSB port and 3.5mm headphone socket. Size-wise, the 120.5 x 61.5 x 10.9 mm handset is more compact in the hand than the first-gen HTC Trophy, despite offering the same screen size. It also has better viewing angles.

HTC is particularly pushing the Radar’s photographic abilities, with the 5-megapixel camera using a back-illuminated sensor for improved low-light performance. There’s also a 28mm wide-angle lens, together with a single-LED flash and f/2.2 aperture. Up front is a VGA resolution camera for vanity shots and video calls, when they’re supported. 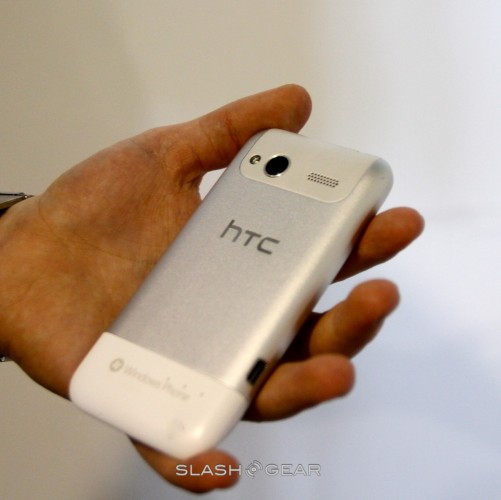 It’s really the combination of HTC’s hardware and the much-improved Mango that makes the Radar a success. Microsoft’s first major update to Windows Phone has, as we discovered in our technical preview, polished many of the rough edges early-adopters complained about; with the Radar expected to be priced roughly in line with the Android-based HTC Desire S, it’s likely to find an audience among those who want to spend less time tinkering with their handset and more time getting on with smartphone features.