The leaked specifications do support some of the previous rumors we’ve heard about the device. The specs indicate that the device will have a 5.9-inch screen with a resolution of 1920 x 1080. A 1.7 GHz quad-core processor is also tipped by the leak. 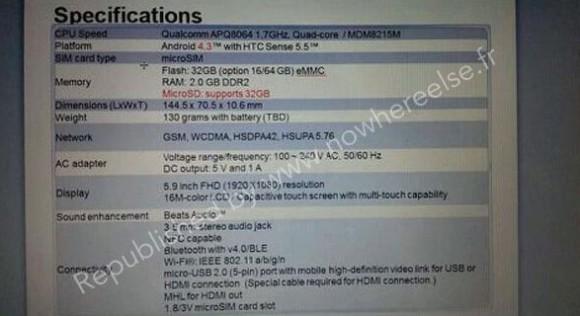 That 1.7 GHz processor will be paired with 2 GB of RAM and the device will be available with 16 GB, 32 GB, or 64 GB of storage. The operating system will be Android 4.3 with HTC Sense 5.5. Other specifications show the device will have BeatsAudio technology, NFC, Bluetooth 4.0, and integrated Wi-Fi.

The smartphone is tipped operate on GSM, WCDMA, HSDPA42, and HSUPA 5.76 networks. The specific processor used in the smartphone is the QUALCOMM APQ8064. Had previously suggested that one accessory available for the smartphone will be a that are your with a 1200 mAh secondary battery. The HTC One Max was also recently approved by the Global Certification Forum.