Rumors continue to suggest that the HTC One Max smartphone will be unveiled on October 17. Ahead of that rumored launch, new details have surfaced about the smartphone. This isn’t the first time details and specifications for the smartphone have been leaked, another rumor suggested the One Max will launch in China first. Some new leaked photos and details have turned up in China.

Every new smartphone that launches brings with it some new accessories, and the HTC One Max will be no different. This latest rumor suggests that one of those accessories will be a new battery door that has its own internal 1200 mAh battery. This accessory battery cover attaches using three pins below the stock battery cover of the phone. 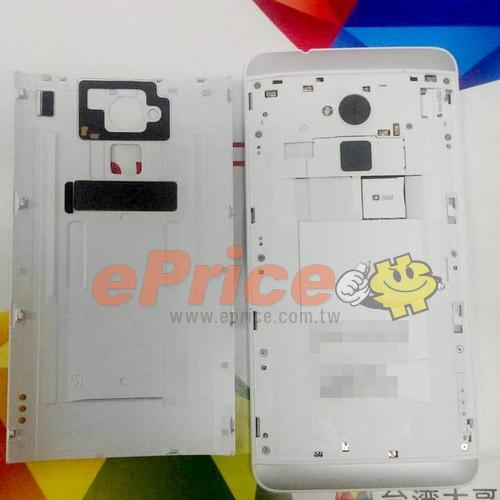 Clearly, the accessory battery cover will add some bulk to the device. With the non-removable internal battery having 3300 mAh of power and the rear battery cover having 1200 mAh of power, the smartphone should have plenty of runtime. That extra runtime will definitely be a good trade-off for a bulkier device for some users.

The Chinese leak suggests that the phone will launch with 16 GB of storage and a 32 GB version will be coming later. Storage will be expandable via memory cards according to the rumors. The device is also tipped to use the Sense 5.5 user interface. Rumors indicate the smartphone will feature a 5.9-inch display with full HD resolution. Beats Audio is out and the HTC One Max will use HTC BoomSound. The rumor also tips a commercial availability date of October 21.