Thankfully, HTC offers UH OH protection for the One M9. The stated goal is to make life easier on us by allowing a device replacement for simple drops or tumbles that do things like crack the screen. The real reason might be that the device is far too difficult to repair without some deep technical know-how. The crew at iFixit just tore down the HTC One M9, and what we see is a puzzle of glue and screws, and a device that you wouldn’t even want to try fixing yourself.

After a quick removal of the plastic toward the top of the device, a few screws give way to clips holding the rear cover in place. It’s a bit easier to repair than the One M8, but problems still persist.

The motherboard on the One M9 is glued down, and right next to the “soft” battery. As iFixit says, “after some very gentle prying with a blunt spudger, we manage to free the motherboard and not catch fire.” Awesome, HTC. 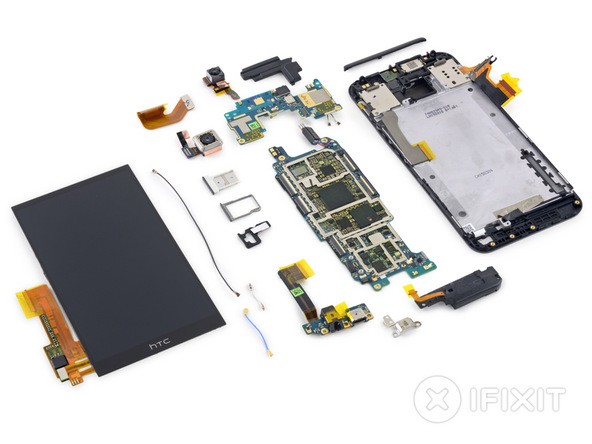 It’s clear iFixit takes umbrage with HTC’s practice of gluing a battery down, especially so tightly to the motherboard. The teardown shows the motherboard itself has to be removed ahead of the battery (which is also adhered to the midframe!), meaning a simple battery swap is really not possible for 99% of us. Again, iFixit is critical of the battery gluing process, saying “burying the battery so deeply within the device signs its death certificate the day of its manufacturing birth.”

Overall, iFixit gives the HTC One M9 a repairability score of 2. Out of 10. Aside form the battery woes, iFixit also notes the most common repair — a busted screen — should be the simplest. On the One M9, it’s among the harder repairs, as you’d have to get past everything else before reaching the display assembly. Strong adhesive is also concerning, and can be dangerous.

The final iFixit verdict? HTC really Has To Change their design. Ouch.