The HTC HD7 wears its potential on its sleeve. The biggest of the first batch of Windows Phone 7 devices, at 4.3-inches it’s also one of the largest smartphones of any OS on the market. We’ve already given our approval to Windows Phone 7 in our launch-day reviews, and we were quietly impressed during our initial play at the HD7’s launch. Available exclusively on O2 in the UK right now, and T-Mobile in the USA from November 8, is the HD7 not just the biggest but the best Windows Phone 7 device around? Check out the full SlashGear review after the cut.

The HD7’s hardware is strikingly similar to that of the HTC Desire HD we reviewed earlier this week. Dominating the phone is a 4.3-inch WVGA capacitive touchscreen, with minimal bezel and a 5-megapixel autofocus camera with dual-LED flash on the back. Inside is a 1GHz Qualcomm Snapdragon QSD8250 chip, the same as all the other first-wave Windows Phone 7 devices, paired with 576MB of RAM, 512MB of ROM and 16GB of flash storage (courtesy of an internal microSD card not intended for user-replacement). Again, there’s no user-expandable storage option.

Hardware controls consist of the power/sleep button on the top edge, and volume and camera buttons on the side; there are also three touch-sensitive buttons under the display – back, home and search – together with a 3.5mm headphone jack and microUSB port on the bottom edge. The metal surround for the camera flips out to prop the handset up for video playback, though we’re dubious about its long-term resilience to damage. While the phone overall feels sturdy, the thin plastic battery cover and the stand do seem the most likely breaking points. 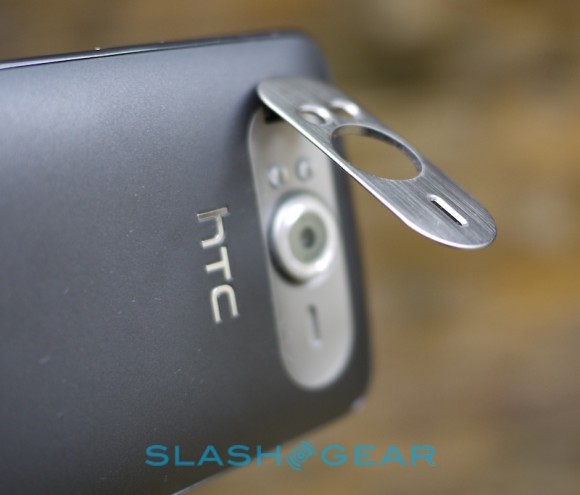 We’ve covered Windows Phone 7 comprehensively in our Technical Preview, together with our Samsung Focus, HTC 7 Mozart and HTC Surround reviews, and we’d recommend reading those to gain a better understanding of what Microsoft’s new platform brings to the table.

Unlike the HTC 7 Mozart, the HD7 makes do with a 5-megapixel camera (rather than 8-megapixels) and a dual-LED flash (rather than Xenon). Since the Windows Phone 7 camera app is the same, there are multiple shooting modes – Auto, Portrait, Landscape, Sports, Beach, Backlight, Candlelight and Macro – together with various effects – Grayscale, Negative, Sepia and Solarize – plus flicker adjustment, a choice of metering – center, average or spot – and flash on/off/auto. The digital zoom steps through its few jerky levels with either the touchscreen or the volume rocker. 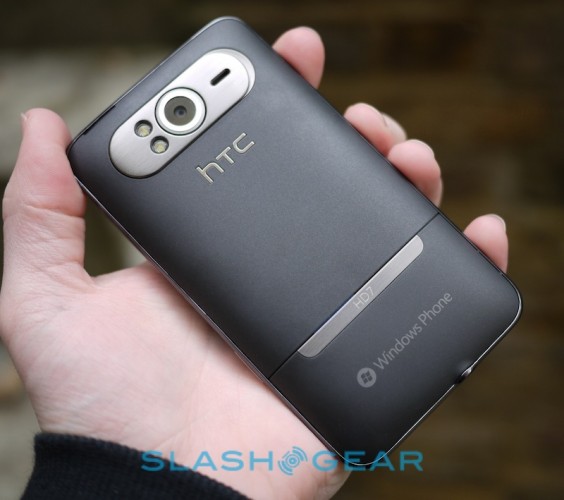 Unfortunately, while the Mozart’s two-stage camera button is solid and tactile, the HD7’s is mushy and uninspiring. It’s hard to tell whether it’s half-depressing to lock focus or not, since the mechanism overall has so much play to it. As a result, more often than not we found ourselves nudging the phone unduly while trying to snap a frame.

Beyond that, focusing on the HD7 seems underpar. The Mozart was slow to lock but generally accurate, whereas the HD7 hunts around and has a far less impressive success rate.  It’s the same during video recording, which can lead to disappointingly fuzzy clips as the focus jumps about (as is visible in the sample footage below).

The final stills are reasonably crisp – assuming the focus has clung to what you were hoping would be the subject of the frame – but the colors are flat and the detail underwhelming. We’ve had better results from the 5-megapixel camera on the HTC Desire and the HTC-made Nexus One, and the Mozart is considerably better.

Consuming multimedia is perhaps the HD7’s forte, then, and – while what is the biggest display on a Windows Phone 7 device today still doesn’t offer any extra pixels beyond the standard WVGA resolution – the handset does a decent job of it. The OS supports 3gp, .3g2, .mp4, .m4v, .mbr and .wmv video, and as long as you’re sitting dead-on to the HD7 and using headphones then the experience is strong. 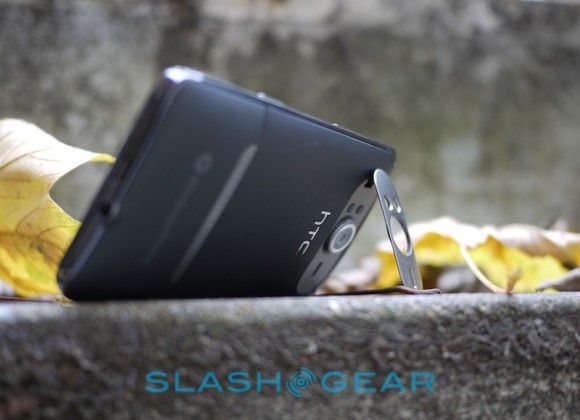 Shared viewing is less successful, mind, mostly because of poor viewing angles that mangle the colors as you move off-center. Unfortunately it’s more noticeable in landscape orientation than it is in portrait, which considering how HTC – and the kick-stand – encourage you to use the HD7, is a real issue. The stereo speakers which flank the short edges of the display, meanwhile, are also pretty underwhelming, and they’re perfectly placed and shaped to catch all the dust and fluff from your pockets, too. Happily audio quality through headphones – either wired or Bluetooth A2DP wireless – was more successful, and the Windows Phone 7 media player responded to the AVCHD controls on our test Bluetooth cans.

Prize off the HD7’s wafer-thin battery cover and there’s space for a 1,230mAh pack, which HTC reckon is good for up to 380 minutes of talktime or 320 hours of standby. Despite the bigger screen and the HD7 being a larger handset overall, it actually gets a smaller Li-Ion pack than its Trophy and Mozart siblings. Other Windows Phone 7 devices offer even more capacity.

The result is a smartphone that penalizes you heavily if you take advantage of its media and browsing abilities. Watch a few video clips, spend some time online over 3G or WiFi, and you’ll find yourself out of juice before the day is through. More moderate use saw us manage a full day, complete with push email turned on.

Phone quality was good, with parties at both ends able to head us clearly, and the speakerphone was strong. Being able to prop the HD7 up on its kick-stand made for a good impromptu conference call setup. We also paired it with Bluetooth earpieces, and had no problems there either. 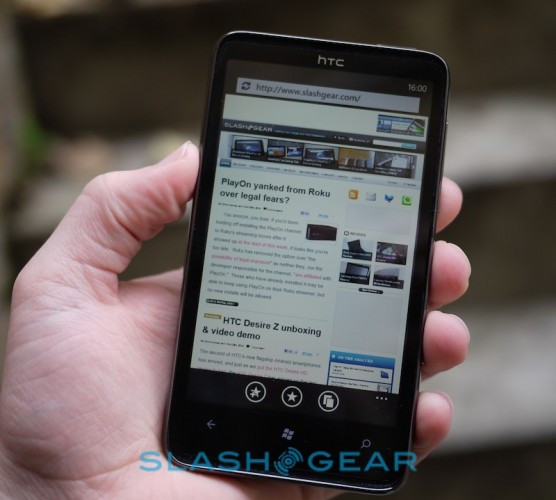 It’s hard to shake a sense of familiarity with the HTC HD7 – that feeling that, despite the new OS, we’ve seen this device before. We’re of course referring to the HTC HD2, the de facto Windows Mobile 6.5 flagship, which shares not only the same screen size, battery and general abilities, but the same processor as the HD7. The question is whether the HD2 was ahead of its time or the HD7 lagging behind; our gut-feeling is that it’s a little of both.

The HD7’s large display, responsive interface and our generally positive feelings about Windows Phone 7 all stand in its favor, but there are still niggling flaws and frustrations that mar the overall experience. Its subpar camera is one, and the average display HTC has opted for is another; that could be a case of building to a budget, but whatever the explanation it undermines the phone that the HD7 had the potential to be.

Make no mistake, the HTC HD7 is a solid Windows Phone 7 device and the OS shines on the 4.3-inch display. However, after finding that the HD2 still managed to appeal despite Windows Mobile, we had similarly high hopes for the HD7: finally, an OS that matches the top-end hardware. For one reason or another, the HD7 doesn’t feel as rounded and complete a device as the HTC 7 Mozart, say. Nonetheless, browsing and multimedia benefit well from the bigger touchscreen, and if it’s sheer inches you’re after, the HTC HD7 is the obvious choice.