At a utterly lovely Sprint media event at CTIA 2011, gold and yellow tones abound, Sprint has announced what they hope will be a heavy contender in this massively competitive 2011 season for Android. It began with a lovely floaty Andy video in full 3D, showing him float about, transforming things from flat to 3D. It was instantly apparent that the device would be the next step in the EVO line. The first announcment was the HTC EVO 3D, the first 4G device with a dual-core and 3D capability with no glasses needed.

This device, they say, will be performing like a PC with gaming, movies, and all manner of video. 3D 5-megapixel camera on the back, Android 2.3 Gingerbread, a QHD display on the front, and hotspot enabled. The hotspot will work with 8 devices, this and the tablet announced making Sprint very obviously the the group with the most devices on what they consider 4G. 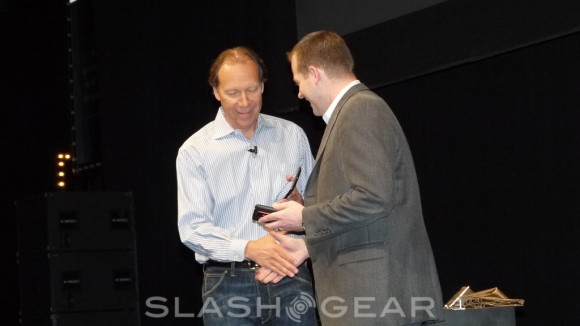 We’ll be grabbing some hands-on with this and the EVO View 4G in a few minutes, hopefully they’ll both be fully functional devices unlike what we experienced at Mobile World Congress 2011. Seeya there!

Sprint also brings the popular and powerful HTC EVO experience to a 4G tablet, HTC EVO View 4G, this summer, with new digital pen technology that makes it possible to make notes on Web pages, ebooks, PDF documents and more, in an easy and natural way

“Sprint is taking wireless innovation to the next level once again as we bring our customers the ability to experience 3D on their phone without glasses,” said Steve Elfman, president – Network Operations, Product and Wholesale, Sprint. “HTC EVO 3D makes it easy to take pictures or movies in 3D when you are on vacation, and then feel like you are there again when you view it months later. This device takes full advantage of Sprint’s powerful 4G network and offers the innovation one would expect as the next benchmark device in the prestigious EVO product line.”

As 3D has become more sought-after in both movie theaters and family rooms, the ability to enjoy 3D on a wireless phone – 3D glasses-free – will change the way customers interact with their devices. According to The NPD Group’s 3D 360° Monitor (September 2010), consumers show a high degree of interest in working with personal media in 3D (with one-third saying they would like to take photos in 3D). For details, visit http://www.3dmarkettrends.com.

The countless ways customers benefit from HTC EVO 3D’s dynamic ability to capture and playback video in 3D include:

Real estate agents can create and share 3D virtual tours of homes that let out-of-town buyers “walk through” the house and truly experience the listings before they can see them live;
Dad can feel like he is in the bleachers watching the ball leave the park for a home run even if he’s forced to skip a Little League game because he is stuck at the office;
3D mapping of terrain will help build new and exciting features for navigation, and hikers will be able to get aerial views of the topography of rivers and mountains while in the backcountry; and
Families can “relive” the excitement of their vacation and feel like they are there again.
“At HTC, we believe in offering a wide portfolio of beautifully designed, powerful and highly customizable devices for our customers, and the HTC EVO portfolio at Sprint does just that,” said Jason Mackenzie, president – HTC Americas. “As HTC continues to push the limits of innovation, we are looking forward to delivering the HTC EVO 3D and our first 4G tablet, the HTC EVO View 4G, to Sprint customers this summer.”

According to ABI Research (Dec. 20, 2010) mobile 3D devices will be driven by three key applications: creation of user-generated 3D content by integrated video and still cameras, playback of 3D content and 3D gaming. It also anticipates that mobile devices may turn out to be the most successful form factor towards bringing 3D technology into mainstream markets.

HTC EVO 3D will be the first 3D handset pre-loaded with the Blockbuster On Demand® mobile application that has access to one of the largest catalogs of movies, including 3D titles. This movie store in your pocket offers video optimized for viewing on HTC EVO 3D’s 4.3-inch screen.

“Consumers want to watch the latest entertainment anywhere, anytime,” said Scott Levine, vice president of Digital, Blockbuster. “Sprint and Blockbuster are taking the movie watching experience to the next level with enabling 3D on a smartphone.”

Blockbuster On Demand offers the hottest new releases on the same day they become available on Blu-ray and DVD. Customers can buy or rent digitally and download directly to their smartphone, along with select 3D movies.

If a video isn’t available digitally, Blockbuster also gives customers access to more than 100,000 movies and TV shows, as well as games, through store inventory at any of the Blockbuster stores nationwide. Also, Blockbuster® by Mail is another option for consumers. They can manage and update their mail queues from their phone, while on-the-go.

Bringing the EVO Experience to a Tablet

Sprint and HTC’s first 3G/4G Android tablet together, HTC EVO View 4G, will bring the best of the HTC EVO experience into a tablet design with a 7-inch 1024 x 600 touchscreen display with pinch-to-zoom, a 1.5 GHz Qualcomm® Snapdragon® processor and the latest version of HTC Sense. As the perfect combination e-reader, media player and portable computing device, HTC EVO View 4G offers a premium entertainment experience with HD-quality video and a rich Web-browsing experience with the ability to browse the Web on Flash-enabled sites.

With dual cameras – a main 5 megapixel auto-focus camera with HD-capable video camcorder and a forward-facing 1.3 megapixel camera – HTC EVO View 4G unleashes the ability to create, stream over the lightning-fast 4G network, share via YouTube™ or Facebook® and watch video with the Qik mobile app.

Although the sleek, aluminum-encased tablet weighs less than a paperback book, it is a powerful productivity tool for business customers and consumers. With lightning-fast 4G connectivity and a large touchscreen display, HTC EVO View 4G makes it even easier to manage e-mail, and its front-facing camera makes the Qik video chat application an easy and appealing way to conduct business while on-the-go.

Also improving on the tablet experience, HTC EVO View 4G allows users to draw, take notes and highlight text on documents on the tablet with the HTC Scribe™ digital pen. Sold separately and available this summer, the enhanced functionality of the HTC Scribe brings creativity to life. For example, the user can draw a sketch or add notations and highlight paragraphs, while reading an eBook, review and comment on PDF documents and add casual comment on photos.

A Sprint developer guide for HTC EVO 3D and HTC EVO View 4G will be available on the Sprint Application Developer website at launch. The developer guide will provide details and information on how to take advantage of their unique hardware and software capabilities, including 3D, HDMI output, DLNA and HTC Scribe Technology on the Sprint Network.

Enjoy 3D without glasses on the go

Exclusively from Sprint, HTC EVO 3D is America’s first 4G smartphone with a 4.3 inch 3D QHD display that allows users to capture, record and playback in 3D – without having to wear 3D glasses. With the latest version of the acclaimed HTC Sense user experience and powered by Android 2.3 (Gingerbread), HTC EVO 3D is ideal for users who want to both stream video and generate their own video experience to record life’s moments, view them in 3D and share them easily. Users can quickly download movies, create user generated content and enjoy a Flash-enabled web browsing experience using the speed of the 3G/4G network and the power a 1.2 GHz dual-core Qualcomm® Snapdragon® processor. HTC EVO 3D takes full advantage of Sprint’s powerful 4G network and offers the innovation one would expect as the next benchmark device in the prestigious EVO product line.