The original HTC Desire became one of the most popular Android smartphones of 2010, a compelling balance of screen-size, functionality and pricing that convinced us in our review and continued to convince buyers throughout the year. Now, HTC is back with the follow-up, the HTC Desire S. Question is, with dual-core Android phones already on the market, does the “S” stand for “sequel” or just “surpassed”? Check out the full SlashGear review after the cut.

The original Desire was HTC’s own-brand version of the Nexus One, the first Google Phone; since then, Google has partnered with Samsung on the Nexus S, leaving HTC to follow its own path with the Desire S. Smaller than the Desire, at 115 x 59.8 x 11.63 mm, and 5g lighter at 130g, the Desire S borrows the unibody stylings of the HTC Legend, with a wraparound fascia/backplate inset with soft-touch matte plastic camera and battery sections.

Up front is a 3.7-inch Super LCD display running at WVGA resolution, the same number of pixels as the Desire but not AMOLED like the original. Underneath are the usual home, menu, back and search keys, now touch-sensitive rather than physical buttons, but thankfully still in the same order as on the Desire. No optical trackpad, however, with precise cursor control taken care of with the on-screen magnifier. Above the screen there’s an LED indicator light, along with a front-facing VGA-resolution camera for video calls. 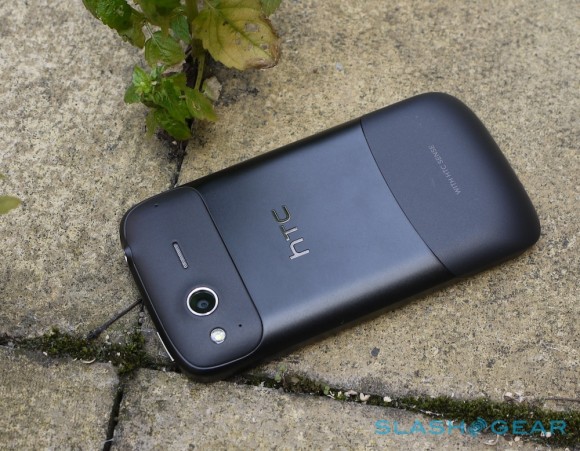 On the left edge there’s an easily pressed volume bar, together with a microUSB port for charging, while the top edge has the power/lock button and a 3.5mm headphone jack. As well as the camera, there’s a speaker on the upper back panel; the lower panel pulls off to reveal the SIM slot and microSD card slot, along with the easily-accessed 1,450 mAh battery.

It’s a very successful design, hitting the aesthetic points with the matte finish and discrete splashes of chrome, along with satisfying usability. The slight “HTC chin” makes it easier to pull the Desire S from a pocket, while the lens for the 5-megapixel autofocus camera (paired with a single LED flash) is ever so slightly recessed so as to avoid scratching when placed on a table. In the hand it feels solid and creak-free, more premium than the plastic-backed Desire. It’s hard not to imagine that this could have been the design for the second Nexus, had Google stuck with HTC as a hardware partner. 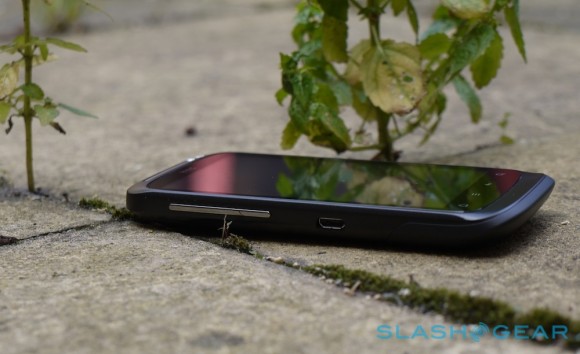 Inside, there’s Qualcomm’s single-core 1GHz MSM8255 processor, the same “Scorpion” chipset as powers the Desire HD and Incredible S. As with both those phones, the Desire S gets 768MB of RAM (along with 1.1GB of internal storage), 50-percent more than you’d find in the Desire. Connectivity includes dualband HSPA/WCDMA along with quadband GSM/EDGE, together with WiFi b/g/n and Bluetooth 2.1. There’s also GPS, a g-sensor, digital compass, proximity sensor and ambient light sensor.

Unlike the Incredible S, the HTC Desire S will hit the market running Android 2.3.3 Gingerbread, the first of HTC’s phones to launch with the latest iteration of the platform. On top is HTC Sense, the company’s combination UI, widget suite, app platform and online cloud system, and a newer version to what you’ll find on the Incredible S.

Without looking at the system info page it’s hard to spot the transition to Gingerbread, so thorough is HTC’s reskin. As for Sense, you still get seven homescreens and various eye-catching widgets to fill them with, but now the menu draw is paginated into grids rather than free-scrolling. The Car Panel (a finger-stab scaled UI for using the Desire S while driving), Connected Media controller, Flashlight, FriendStream (for pulling in Facebook, Twitter and Flickr updates), HTC Hub, Locations, Peep (HTC’s own Twitter client), the Teeter game, Weather app and WiFi Hotspot app are all preloaded as normal, but now you also get a Mirror app which basically turns on the front-facing camera and turns your smartphone into a replacement for a pocket mirror. Still, we know plenty of people who check their hair and makeup using the shiny, reflective surfaces on their phones, so perhaps HTC is onto something.

The pull-down Android status bar keeps the useful list of recently-used apps running along the top, but adds a new tab at the bottom of the notifications section for Quick Settings. That has checkboxes for WiFi, Bluetooth WiFi Hotspot, GPS and Mobile Network power, along with a shortcut to the full settings menu. It’s a great use of the space, and saves the homescreen from being cluttered with power widgets. In the call options you can have the Desire S automatically reduce the ringtone volume when you pick up the handset, automatically set it louder when the phone is in a pocket or bag, and automatically switch on the speakerphone when the phone is flipped over. 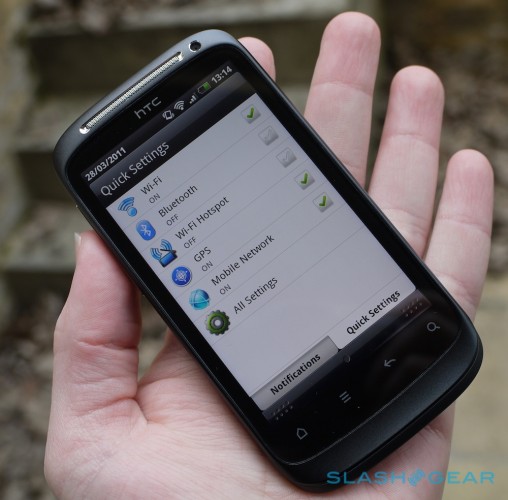 Flash Player 10.2 is supported, which means in-browser video streaming, animations and games. As with the Incredible S, the Desire S struggled with 720p HD video playback, warning that the video had not been optimized for mobile viewing and dropping frames (over a fast WiFi connection, not 3G) throughout the clip. However, the end result was still watchable, with no audio glitches.

There’s no TV or film streaming, nor OnLive gaming service, as will debut on the Flyer tablet. While HTC has said other devices will get those services in time, it’s yet to confirm which models exactly. No telling, either, whether the Desire S’ processor will be capable enough to run them (HTC has used a single-core 1.5GHz chip for the Flyer). Therein lies the flipside of the processor argument: a single-core 1GHz is sufficient today, but it’s harder to judge whether it might be up to scratch twelve months into the average two-year agreement, when the next OS update and batch of chipset-intensive apps are out. 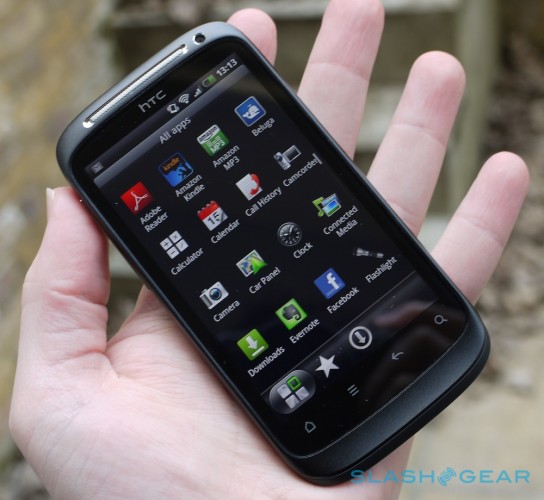 Also missing is the HTC video call app shown alongside the Desire S’ launch at MWC 2011 last month. In fact, out of the box there’s no video calling functionality; instead you’ll have to look to Skype or another third-party app in order to take advantage of the front-facing camera. Still, thanks to HTC’s Hub – which includes a download store for the company’s own apps – we imagine video calling can be added in later when it gets its official release.

Having been impressed with the 8-megapixel camera on the Incredible S, we had similarly high hopes for the Desire S’ camera. Unfortunately it’s not quite the same all-rounder. Stills are noticeably grainier, though still fair for a 5-megapixel unit, but macro shots are poor. While the Desire S shares the same touch-to-focus as the Incredible S, it simply couldn’t lock onto close-up subjects in the same way. Images generally can be blotchy and fuzzy, lacking detail in wider scenes, though mid-range subjects look good. The VGA front camera produces, unsurprisingly, rubbish stills. 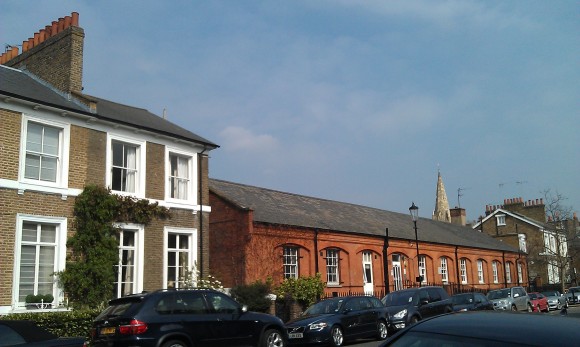 Video fares better, with 720p HD on the Desire S coming through reasonably jerk-free, and as long as your pans are slow’n’smooth there’s only minimal tearing. The same touch-to-focus system can be used during video recording, automatically adjusting exposure and contrast as well, though there’s the same slight lens jump as the Incredible S displayed.

Incidentally, while there’s no shortage of sharing options, HTC’s gallery shows one odd frustration by lacking a share button when you’re actually viewing a photo. The menu key pulls up slideshow, media streaming, “show on map”, photo details and options to set the image as wallpaper or something else, but if you want to send it as an email attachment or some other route, you need to back out and long-press on the thumbnail to get the “Share” command.

HTC would do well to consider adding a dedicated camera button, and there’ll be those who wish the Desire S had an HDMI output. Instead you get DLNA streaming support. In short, it’s the same passable camera that the original Desire had, good enough for casual, everyday use but not – unlike the better smartphone optics we’re seeing – something you’d want to replace your dedicated camera with.

As a phone, the Desire S proved capable; callers had no issues with audio performance, and we were able to hear them loud and clear through the earpiece. The speaker could do with being a little louder, mind. Reception was a step up from the last-gen hardware; compared to a Nexus One on the same network, the Desire S managed to cling more tenaciously to a signal in a known poor coverage area. 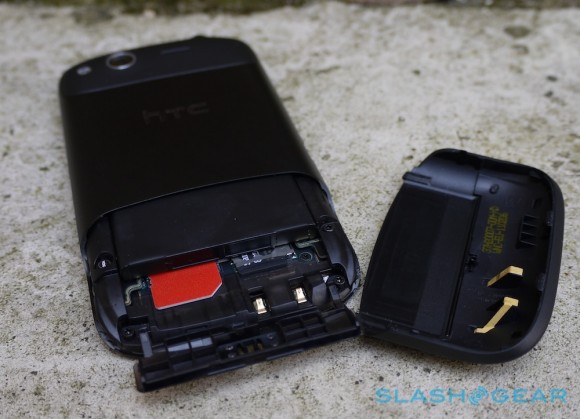 While having two cores in your smartphone is likely to be the fashionable push in 2011, the Desire S is ample evidence that a good balance of hardware and software can deliver a polished user-experience without demanding the fastest (and most energy-guzzling) chip around. Interestingly, despite having the same chipset/RAM as the Incredible S, the Desire S only scored 1147 in Quadrant benchmarking; the Incredible S managed 1559. Nonetheless, the 1GHz Snapdragon proved enough to keep the smartphone moving on at a fair lick, with apps loading with little in the way of delay.

HTC quotes up to 435 minutes of WCDMA talktime (up to 590 minutes GSM) or up to 455 hours of WCDMA standby (430 hours GSM) from a full charge of the 1,450 mAh battery. In practice, with push Gmail turned on, and a mixture of browsing, messaging, some photography and a couple of short calls, the Desire S ran for a full day. Less intensive use and you could probably extend that into a second day, though if you’re a fan of streaming media then you’ll likely discover that has a particularly large impact on battery life. Still, the smaller display than the Incredible S and Desire HD pays dividends.

Back when we reviewed the HTC Desire, almost twelve months to the day, the smartphone was at the cutting edge of Android devices. Tagging on the coat-tails of the Nexus One, it closely followed Google’s example of a sizable screen, fast processor and up-to-date software, shaping up as a solid all-rounder.

The Desire S launches into a very different market, one where 4-inch screens and larger are common, where dual-core processors are appearing among the high-end devices, and where expectations of Android are greater than ever. In that line-up, the Desire S is no longer the HTC flagship but its solid, mid-range phone: the handset for the everyman (or indeed everywoman) rather than an aspirational phone for bleeding-edge early adopters. 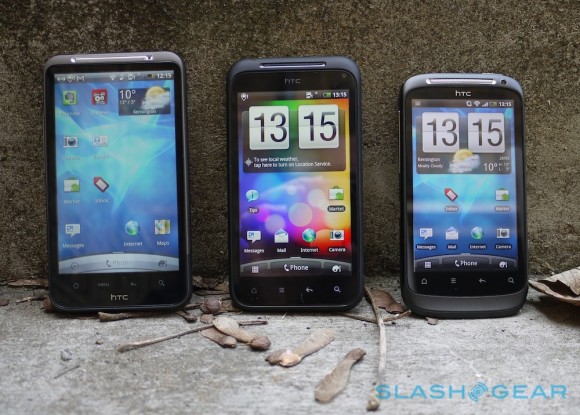 To meet that brief it has to be even more consistent, even more complete, something that all users can get to grips with. On that front HTC’s mixture of preloaded apps hits most of the key areas, video calling aside. The Sense UI is easy to navigate and, with these latest tweaks, not lacking in functionality, while the online suite of location-tracking, sync and remote access services flesh out the Android experience in a way neither Google nor any other OEM producing Android phones delivers.

The lingering question is “what’s next?” and with dual-core devices already on the market (though not, yet, from HTC itself) the Desire S goes up against faster, more future-proofed smartphones. Those cautious early adopters may do better waiting for the HTC Pyramid, expected to not only double the cores but throw a higher-resolution, qHD display into the mixture as well.

Still, the Pyramid will be expensive, and the good thing about the Desire S is that its midrange focus should mean a reasonably affordable price tag. At the beginning we asked if the “S” in HTC Desire S stood for “sequel” or “surpassed”, but in fact it’s more likely for “solid” – reliable hardware, well-crafted software, and on track to be another HTC best-seller.