Following the Acer C720, which we recently reviewed, HP has brought its own new Chrome OS-harboring laptop to the market, the Chromebook 11. Unlike some of the other Chromebooks that are available, HP has elected to aim its focus on the design aspect of its offering, bringing to market a small laptop that in some ways resembles an older MacBook, adding a splash of color and the ability to charge from a standard smartphone charger into the mix. With this design-centric focus comes a slightly higher price tag than competing Chromebooks, being priced at $279 USD while the new Acer C720 is priced at $249. Read on for our full SlashGear review to see whether the Chromebook meets its premium pricing.

The Chromebook 11 features a Samsung Exynos 5250 GAIA processor, as well as 2GB of DDR3 RAM and a 16GB SSD. As a comparison, the aforementioned Acer C720 features an Intel Haswell processor, 4GB of RAM, and a 16GB SSD. It is this hardware difference that puts the biggest divide between the two new Chromebooks, ultimately making up for what the C720 lacks in design and construction and proving to be the Chromebook 11’s Achilles heel. 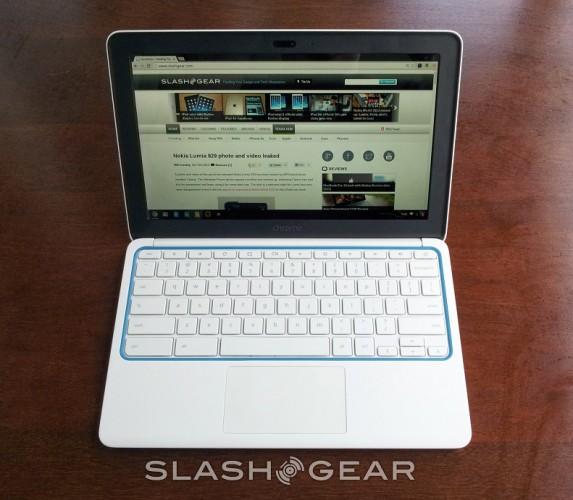 The webcam is a VGA-resolution camera, and as such doesn’t provide the best video quality. The display excels over the C720, however, with the 11.6-inch IPS offering 300 nit brightness, a glossy finish, and immediately notable sharpness, as well as a fairly wide viewing angle at 176-degrees. The lack of vents and a fan naturally means the laptop runs on the cool side, and the lack of speaker grilles is made up by a better placement overall — beneath the keyboard, allowing the audio to come through without muffling even if the laptop is laid against a soft surface, such as on a bed. 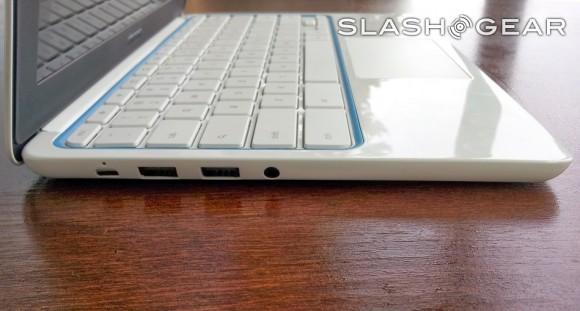 Along the left side of the Chromebook 11 are two USB 2.0 ports, a SlimPort video out, and the microUSB charging slot. Connectivity comes in the form of both Bluetooth 4.0 and dual-band 802.11 a/b/g/n, while the battery is a 30Wh offering and the mobile broadband model has a SIM card slot on the right side.

The HP Chromebook 11’s design is surprisingly solid for its $279 price tag, made of smooth white plastic with rounded edges and a vent-less, screw-less construction. The display bezel is black, and a strip of color is positioned immediately around the keyboard, as well as in two plastic slats across the bottom. A color light bar is the only adornment on the laptop’s lid, glowing when the display is open in blue, red, yellow, and green segments. 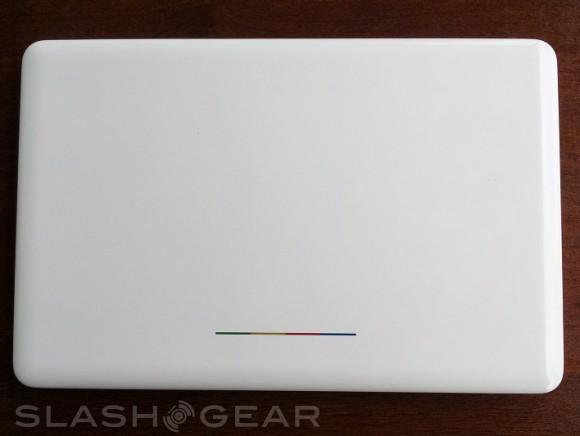 The design feels very solid, and immediately stands out as superior when compared to, for example, the Acer C720 that was just released. It isn’t only the visual element of the design that catches one’s attention, but also the solid, slim feel of the laptop when being handled. The display is fluid when opened, and the keyboard — which is made up of low-profile keys — is very comfortable to type on. Unlike the Acer C720, the HP Chromebook 11’s keyboard keys have a noticeable plunger feel when depressed, giving them a nice report and degree of resistance that doesn’t feel cheap. 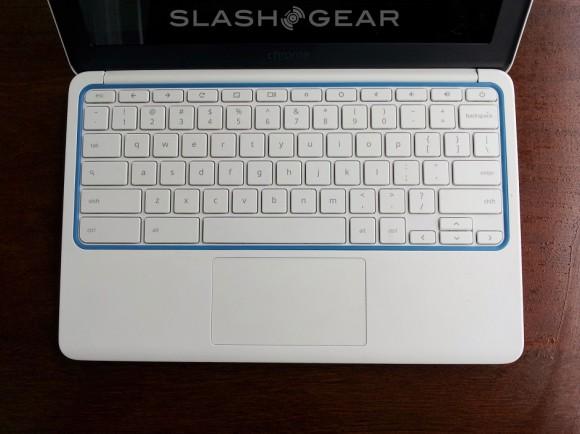 The only complaint regarding the Chromebook 11’s design are the rubber slats on the underside, which are colored the same as the strip running around the keyboard and designed, it would seem, to provide some grip on a desk or table’s surface. The problem is that both slats are a type of hard, dry plastic that, while not smooth like the base of the laptop itself, is nonetheless smooth and hard enough that it provides little actual grip on a surface. In addition, the slat near the hinge is several times the width of the plastic beneath the front of the device (perhaps to help guard against unwanted bend when typing), but it is an awkward design choice. The blue version, for example, looks like a strip of protective tape that ought to be peeled off. 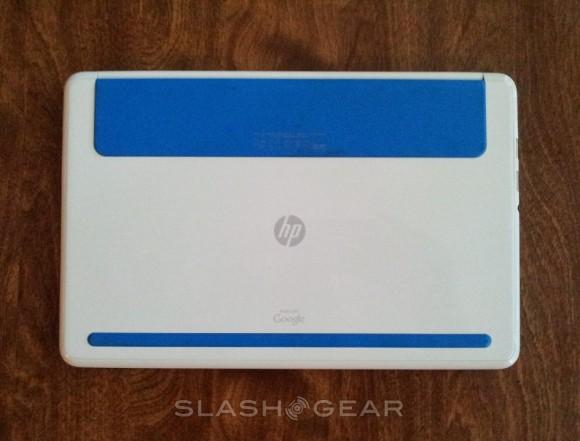 It is said that if something seems too good to be true, it probably is, and the Chromebook 11 is no exception. Though this diminutive laptop is beautiful and has quite the solid construction, it lags (no pun intended) in the performance department, so much so that even those who have never used a higher-end laptop will still likely end up frustrated when using it. If a picture is worth a thousand words, the video below is twice as valuable.

This audio stutter was, unfortunately, more of the norm than an exception when browsing and watching video and listening to music. While low-load websites like Google.com don’t result in a stutter, stepping up to a website like Facebook, for example, resulted in some minor stutter, and more content heavy ones like our own and CNN.com resulted in pretty harsh stuttering and system bogging. On occasion, such a happening is forgivable, but after the first dozen times it became preferable to stop playing audio altogether rather than deal with the issue.

In the same vein, there were occasions where having a chat box pop up would cause a video to lag a bit or stutter, and could also cause music to stutter. Loading on Facebook is generally slow and would bog on occasion, and images can take some extra time to load fully. This isn’t to say that the laptop is unusable — I watched Netflix and Hulu mostly without issue, and it can handle HD videos on YouTube as well. Website loading isn’t terribly slow, though there is a noticeable wait. The biggest problem is the catching and stuttering and occasional system bogging — if you’re patient enough to deal with that, it runs smoothly once everything is loaded.

After clocking a dozen or so hours of casual usage on the Chromebook 11 over the course of a few days, enough bugs cropped up that it seems apropos to give them mention in their own section. In this instance, these aren’t performance issues, such as stuttering audio, which isn’t a bug but instead the result of the hardware. During normal usage, some issues cropped up that appeared unrelated to performance issues, however.

One problem that happened on three occasions was the screen suddenly shutting off in the middle of an activity — in two instances during Web browsing, and in another during a chat session. There was no apparent reason for this, and the laptop itself didn’t shut down. Instead, the Chromebook acted as if the display had been shut, though it hadn’t been moved. Of the three times, twice required the keys to be tapped multiple times and the screen to ultimately be closed and then opened before the display turned back on. 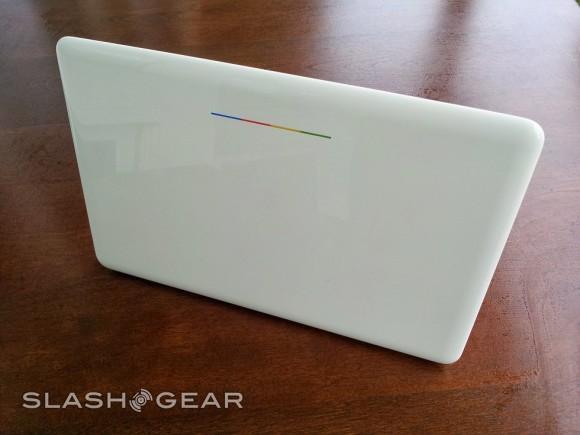 Another problem also resulted when watching Hulu and similar video services on the laptop while surfing the Web. For whatever reason, pulling open a couple tabs would occasionally cause the audio to immediately be dropped (a few times per video), and it would take pausing the video and then hitting play again to bring the audio back. This was an unusual fluke, in that the video didn’t bog down suggesting a performance issue. Rather, the audio would just disappear without warning or apparent reason, and come right back after a quick pause.

The HP Chromebook 11 is a mixed bag, and whether it will work for any given user depends ultimately on what their needs are and where they are willing to sacrifice. If you’re a business user, there is little incentive to use the Chromebook 11, in that the performance and battery life are both lower than what you’d get from the Acer C720. In addition, the Acer offering brings to the table more options than the Chromebook 11, namely USB 3.0 rather than just USB 2.0, an HDMI video port, an SD card slot, and about three additional hours of battery life. 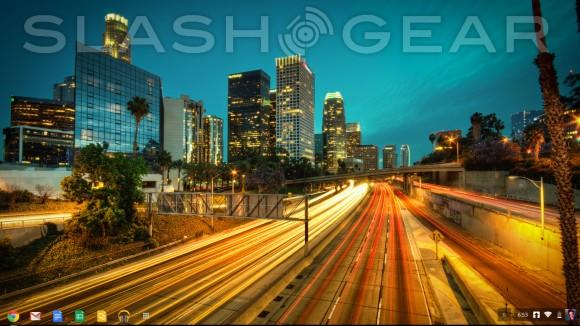 If you’re a user who is more concerned about style and have minor hardware needs, perhaps a writer in need of a solid and inexpensive laptop that looks stylish at the coffee shop, then the Chromebook 11 is an applicable choice. Regardless, it is important to note that with the stylish design will come some big sacrifices in performance and battery life over what the new Acer C720 offers, and that you will be paying about $30 more for the honor.