How Anki’s Cozmo is the ambassador for robot-human relations

Anki has come a long way from its WWDC 2013 demo of iPhone-controlled race cars, but today’s big reveal of Cozmo, it’s AI-blessed robot, is a lot more than just a toy. Scurrying around on its tank tracks, the palm-scale gadget looks like a plaything but is in reality a clever sleight of hand to bring some of the most complex parts of modern computing right into the home.

Bloks may be very different from a Wall-E style robo-buddy, but the underlying message is the same: you’re more eager to learn, and you learn faster, if there’s something tangible in front of you. Some kids gravitate to learning code like metaphorical fish to water, but others – not to mention many adults – need a glossy hardware “carrot” to entice them into play.

In many ways, that’s the more interesting aspect of Anki’s Cozmo. While the robot might be appealing with its out-of-the-box functionality – exploring your desk, trying to coax you into playing games with it, and generally acting like an R2-D2 style pal – its long-term allure is how straightforward it promises to make things like computer vision, AI, and advanced robotics.

Anki will have an SDK for just about every aspect of Cozmo’s abilities, and there’ll be an immediate payout to getting to grips with each component, since it’ll be reflected not just on a computer screen but on the desk in front of you.

Cleverly, though unlike Anki’s Overdrive racing game which requires a special mat on which the cars orient themselves, Cozmo needs no such limited arena, the real smarts are kept wirelessly tethered in your iPhone or Android handset. Rather than hamstring the robot with its own, soon-outdated processor to handle every aspect of computer vision and processing, Anki gets to piggy-back on the rapid development pace set by smartphone manufacturers.

As your iPhone 7 or Galaxy Note 7 gets faster and more capable, therefore, so does your robot.

If there’s a mystery to Cozmo, it’s how Anki’s little gadget can shape the way we think of, and interact with, artificial intelligences and robots.

Prompting sympathy and understanding for robots – whether it’s when they screw up and make mistakes, comprehending their limitations, or just coexisting with them in daily life – has proved trickier than many expected. You can’t just build a robot that looks like a human and expect people to treat it as such; in fact, you slide straight into the Uncanny Valley of even greater mistrust.

Instead, Cozmo plays on our tendencies to nurture, especially when something seems weaker than us. Treat the robot roughly – shake him, perhaps, or tip him over – and he’ll squeak and chirp unhappily; pay him attention, and he’ll reward that with more playful games and cuter interactions.

In short, just as with a new pet or even a new human friend, all the cues nudge you toward taking care of Cozmo and building an emotional bond. 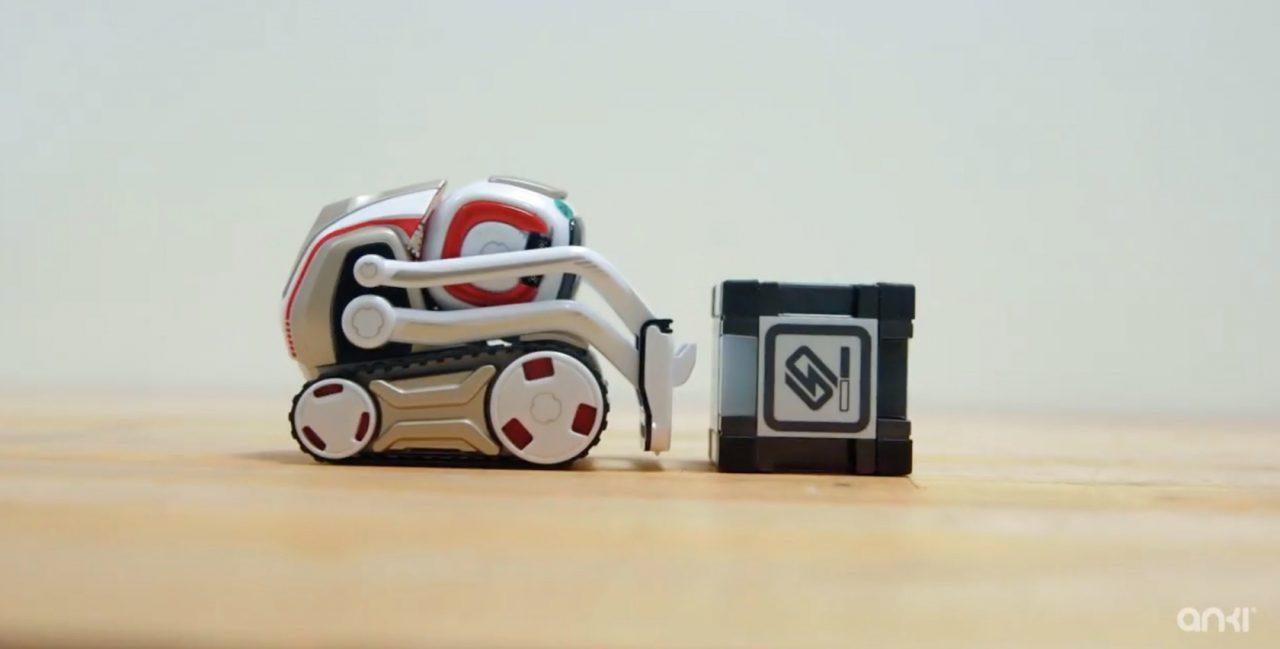 Indeed, Anki refers to its home-grown character algorithms the “emotional engine” – it called upon Carlos Baena, responsible for animating Wall-E, Buzz Lightyear, and other Pixar characters, to help develop lifelike emotions even if all Cozmo has are a couple of blue boxes for eyes, a single arm to wave, and a wordless squeak like a high-pitched Furby – and it’s that softening of the line between “toy” and “friend” which could give the robot its real longevity.

Anki isn’t alone in trying to distill personality into products. Delayed robot-companion Jibo, for instance, attempts the same trick, also using the bare minimum of human-esque visual cues. Yet with a $190 price tag when it arrives this fall, Cozmo will undoubtedly be one of the most affordable ways to start experimenting with artificial intelligence.