Apple’s HomePod may auto-tune itself to suit wherever it’s placed in a room, but there’s a physical reason why you should still be careful about where you put the smart speaker. The Siri-powered music player is one of Apple’s more cohesive designs of late, smaller than you might expect from photos, and clad in a textured – but acoustically transparent – fabric sheath.

However, it seems there are still some issues that Apple didn’t see fit to warn us about. HomePod sits on a silicone foot – indeed, the base is the only place you’ll actually find the Apple logo – but if you lift it up to look at it you might find there’s an ugly ring left behind on whatever furniture it was placed on. That, unfortunately, is what several owners are now discovering.

The Wirecutter spotted the issue, as did Pocket-lint, and Apple confirmed that it is, indeed, a known tendency of the HomePod. It depends on what the surface is it’s placed on, of course, with certain types of wood being problematic. After a period on a wooden side table, for example, or an oiled butcher-block countertop, white circular rings were found.

According to an Apple spokesperson, “the marks can improve over several days after the speaker is removed from the wood surface.” If they don’t, or if you’re impatient, the Cupertino company’s advice is a little more drastic. “Try cleaning the surface with the manufacturer’s suggested oiling method,” so the suggestion went, which might be a little more intensive than you’d have hoped. 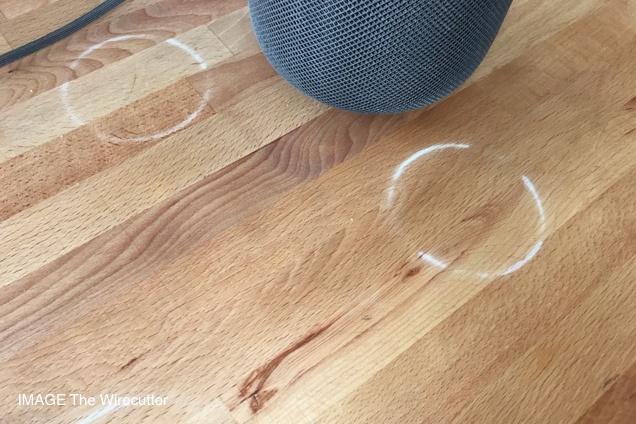 It’s worth noting that, in our own testing with HomePod in a number of places and on a range of different surfaces, we’ve not observed any issues with left-behind rings. That includes painted shelves, tile, glass, and sealed wood. All the same, it may give you pause as you consider not only the sound quality of a particular location, but whether HomePod might not play entirely nicely with the furniture there too.

It’s unclear at this stage what the exact problem is. Other devices – indeed, other Apple devices – have silicone feet, but don’t struggle with the same issue of leaving a mark. It could well be a chemistry issue with Apple’s supplier of the HomePod’s base, and thus something the company could correct on the production line.

Certainly, it’s not sufficient to dampen our enthusiasm for HomePod as a musical speaker. Siri’s performance still leaves us a little less impressed, at least when you roam outside controlling Apple Music by voice, as we noted in our HomePod review. All the same, it’s another thing to bear in mind as you decide where to situate your smart speaker.

Update: Apple has a new support document with guidance on where best to put HomePod, how to clean and maintain it, and other details. It specifically refers to the white mark issue, which Apple says “is not unusual” for silicone bases:

“It is not unusual for any speaker with a vibration-dampening silicone base to leave mild marks when placed on some wooden surfaces. The marks can be caused by oils diffusing between the silicone base and the table surface, and will often go away after several days when the speaker is removed from the wooden surface. If not, wiping the surface gently with a soft damp or dry cloth may remove the marks. If marks persist, clean the surface with the furniture manufacturer’s recommended cleaning process. If you’re concerned about this, we recommend placing your HomePod on a different surface.” Apple