Here’s what Wolfenstein had to do to launch in Germany

The newest in a series of classic first-person shooters is here. Wolfenstein has been released to the whole world – including Germany. This release is historic for the Wolfenstein series as it’s the first time the game has been allowed for standard sales inside of Deutschland. This year the game comes to Germany with a collection of changes that more or less make the game just as blood-and-guts filled, but far less direct in its Nazi-brand delivery.

The first and most important change to Wolfenstein: The New Order for its German release is the removal of the Nazi party in name and in brand. This version works with “Das Regime.” This leadership party no longer works with the swastika, instead having unidentifiable shapes, wolf heads, and the Wolfenstein logo – as you’ll see above.

German Criminal Code 86a was enacted soon after World War II and has been modified several times since. In this code, “use of symbols of unconstitutional organizations” includes the Nazi Party and all symbols that are even very loosely related. If a symbol is decided to be displayed in support of the National Socialist party, it will almost certainly be deemed illegal.

Wolfenstein’s release here in 2014 was joined by an effort on the part of its developers at Bethesda Softworks to rid the game of any Nazi symbols or mentions of the Nazi party directly. In the end, gameplay is not affected in a major way. Below you’ll see a bit of German-born gameplay complete with changes.

As you’ll see throughout the level, changes are rare. Unless you’re running down the main drag right down deep in Berlin, this game isn’t as graphic design-filled as some previously-released Wolfenstein titles, so while it certainly wouldn’t have been a “flip the switch” change for Bethesda Softworks, it’s not as if the entire game needed to be recreated. 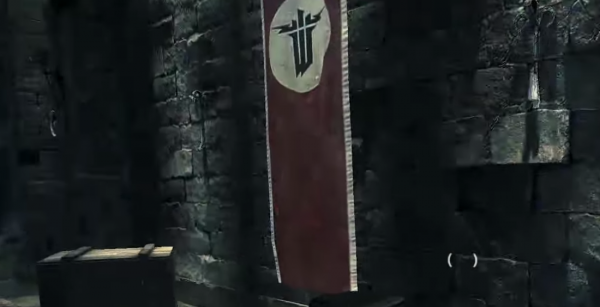 If you’re in Germany or Austria – where there are also some changes, but not nearly as many, have a peek at this game and keep in mind its change-over. This is still an extremely violent and blood-filled adventure, not made for children, but here slightly less direct in its plot.