In the grand scheme of netbooks, Hercules probably isn’t a name you associate with budget ultraportables; the company is taking their first step into the market with the eCAFÉ EC-1000W. A 10-inch Atom N270 machine, there’s little on the spec list that makes the EC-1000W stand out among the rank and rile, so is this yet another me-too model or a netbook worth considering? Check out the full SlashGear review after the cut.

As well as the last-gen 1.6GHz Intel Atom N270 processor, the eCAFÉ EC-1000W gets 1GB of RAM, a 250GB 5,400rpm hard-drive and WiFi b/g/n. There’s also a 4,400mAh 6-cell battery, three USB 2.0 ports, VGA output, ethernet and a multiformat memory card reader, along with audio in/out and a webcam/microphone. OS is Windows 7 Starter, and there’s an eCAFÉ Connect app which attempts to make common tasks – like hooking up to a WiFi network – a little more straightforward for entry-level users.

Design-wise the EC-1000W is reasonably distinctive. Measuring in at 10.8 x 7.7 x 1.3 inches, it swaps hard edges for rounded corners and a framed 10.1-inch 1024 x 600 display that goes a little way to disguising the thick bezel. The 88-percent sized keyboard uses chiclet keys with decent travel but some sluggishness; combine that with the fact that they’re smaller-than-average and typing can be a little slow. In contrast, the trackpad is decently large, though it doesn’t support multitouch gestures. We wish Hercules hadn’t used such stubborn mouse buttons, though.

Like most other netbooks we see, the EC-1000W has a highly gloss-finish display, and that adds up to frustrating reflections during use (especially if you’re trying to work outdoors). It’s a shame, as the LCD panel itself is bright and color-rich, with particularly impressive contrast. While the speakers are confined to key-sized grills right under the netbook’s hinges, that doesn’t appear to impinge seriously on loudness; we were quite surprised by how much noise the eCAFÉ can put out. Of course, there’s a headphone socket for private listening. 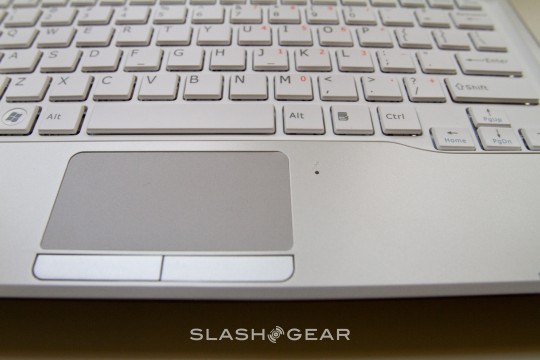 Of course, your media consumption will be limited primarily by the hardware specifications. The Atom N270 processor isn’t known for its crunching ability, and the Intel GMA 950 graphics it’s paired with pales next to newer, NVIDIA Ion toting machines. End result is that standard definition streaming video, such as YouTube, plays reasonably well, though 720p proved beyond its abilities. Less ambitious applications, like internet browsing or music playback were more successful, though we learnt to dread sites making significant use of Flash since the EC-1000W would end up sluggish.

We benchmarked the EC-1000W using Geekbench, a synthetic test of memory and processor performance, and the netbook scored 802 overall.  That lags behind the 886 scored by an ageing MSI Wind U100, which uses the same processor but runs Windows XP Home .

Battery life, meanwhile, fell short of the 6hrs Hercules estimate. Used for basic internet browsing over WiFi, the EC-1000W held up for just under five and a half hours, though that figure fell when we watched video. Overall, it’s a lesser showing than machines based on the newer Intel N280 chip, which offers little in the way of a performance boost but can make for a slightly more frugal netbook, and well behind latest-generation Atom N450/N470 machines.

Given the number of netbooks out there with cookie-cutter specifications, price perhaps ends up playing a more significant role than in more mainstream notebooks. Amazon are currently listing the eCAFÉ EC-1000W for $319.99; problem is, they’re also offering the ASUS Eee PC 1005HA – which matches the Hercules’ specs but offers longer batter life – for $284.99. We prefer the ASUS’ keyboard, too, which is a lot less frustrating than the shrunken example on the EC-1000W. Some users may prioritise the eCAFÉ’s distinctive looks as justification for paying a little more, but for those looking for the best balance of price and functionality the Hercules falls short.