Hellboy, the newly-named dinosaur “out of left field”

Today the Regaliceratops dinosaur, nicknamed “Hellboy” by its discoverer, is revealed to the scientific community. Described today in the science journal Current Biology, Royal Tyrrell Museum paleontologists Caleb Brown and Donald Henderson tell of a discovery made – almost by accident – on the shores of the Oldman River in Alberta, Canada back in 2005. Regaliceratops is one of a wide array of dinosaurs that – at first glance – might remind you of the very famous dinosaur triceratops. In fact it’s similar, but not the same.

This pile of bones was discovered by geologist Peter Hews. He worked with the Royal Tyrrell Museum to excavate the dinosaur bones in 2006 and 2008, during which, according to National Geographic, the dinosaur was given the nickname “Hellboy.” 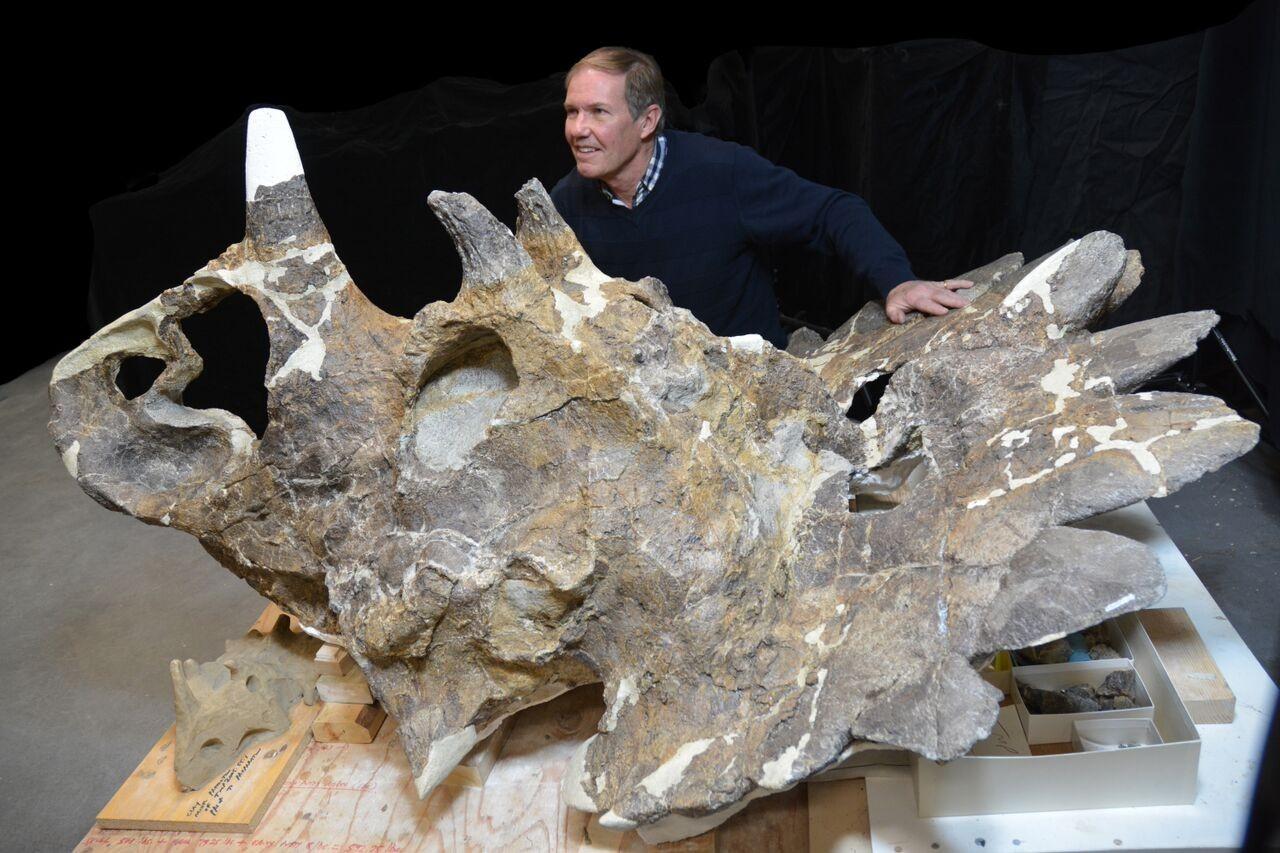 Above you’ll see Peter Hews near the skull of Hellboy. Photo by Caleb Brown.

Not unlike the comic book character, this dinosaur’s skull is ancient. Not unlike that discovery, this one was born of a less-than-ideal bit of work.

Paleontologists working to uncover this creature’s remains had a rough time working with what Brown described as “a combination of hard rock, steep cliffs, and proximity to protected fish spawning habitat.”

These conditions bore the nickname.

Below you’ll see the Regaliceratops as realized by artist Julius Csotonyi. 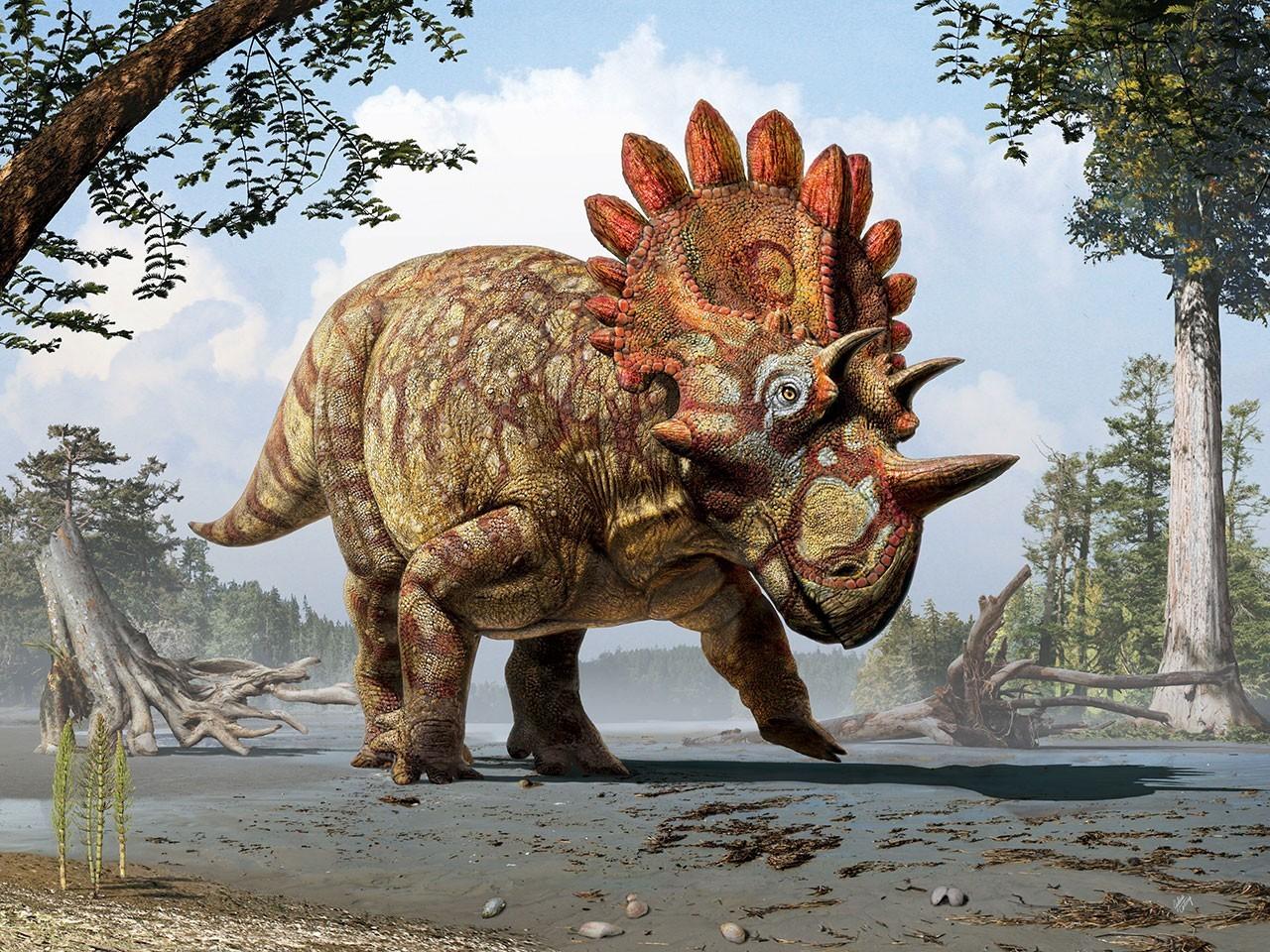 What’s rather interesting – amongst other things of course – is the idea that this dinosaur may mark a point at which evolutionary convergence took place.

This means – as you’ll see below – that Ceratopsidae split into two unique evolutionary lines at one point. This dinosaur may have been born of creatures from two very separate paths. 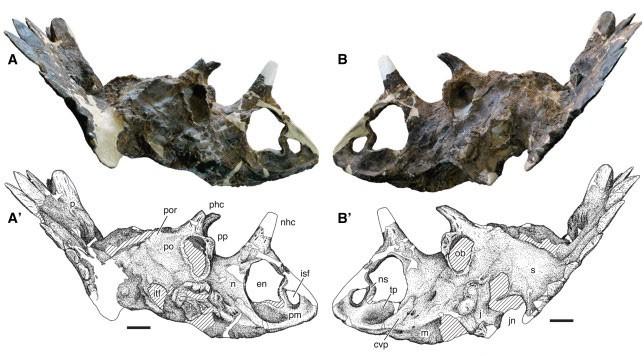 Above and below you’ll see Photographs and Interpretive Line Drawings of the Holotype of Regaliceratops peterhewsi gen. et sp. nov. 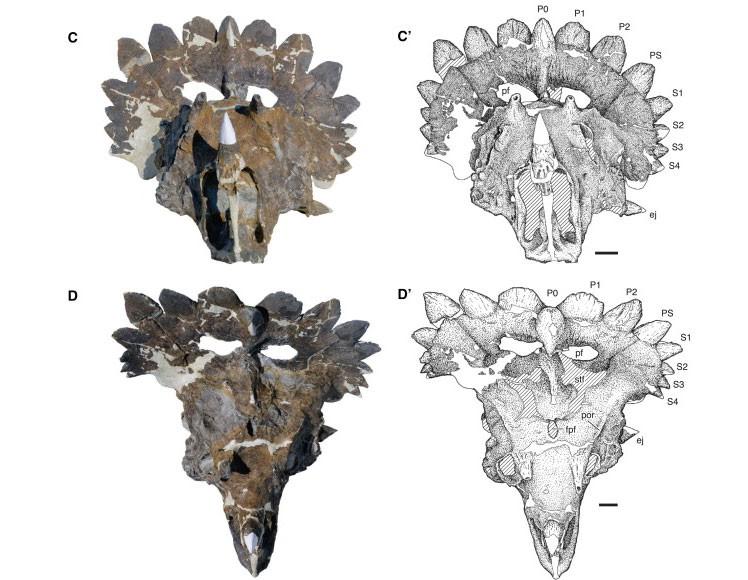 Brown suggested that a long nose horn and tiny brow horns made Regaliceratops “stick out like a sore thumb.”

Fark said that compared to the rest of the horned beasts of the time period, this dinosaur was quite strange.

“Regaliceratops is sorta out of left field!”

For more information, find the full paper on this subject in the scientific journal Current Biology under title “A New Horned Dinosaur Reveals Convergent Evolution in Cranial Ornamentation in Ceratopsidae”. This paper was authored by Caleb M. Brown and Donald M. Henderson.