Now turning a netbook into a cheap tablet or UMPC isn’t new, and we’ve seen plenty such mods before, but this so-called Harlequin project is something else.  My Dell Mini forum member pakkei decided he couldn’t wait for Microsoft to release the Courier and thought he’d make one himself, converting his Inspiron Mini 9 into a slate-format tablet and adding in a second, 9-inch USB touchscreen.

He’s expecting to use the left panel for reading content – as you can see in the image above, there are shortcuts to different websites running across the bottom of the display – while taking notes on the right panel, either handwritten or pecked out on an on-screen keyboard.  Since the netbook is running Windows 7 there’s both handwriting recognition and voice recognition, and you can also flip the orientation of the two displays and use it in a more traditional notebook form-factor with touchscreen controls.

So far most of the system is functional, but it needs a dual-hinge casing and some cable work to slim everything down.  Still, we’ve a feeling pakkei will have his DIY Courier complete before there’s a whiff of the real thing on the market.  Ironically, too, Courier is tipped to have been originally inspired by another dual-screen mod, that time courtesy of Microsoft Research’s Ken Hinckley, which we wrote about all the way back in October 2008. 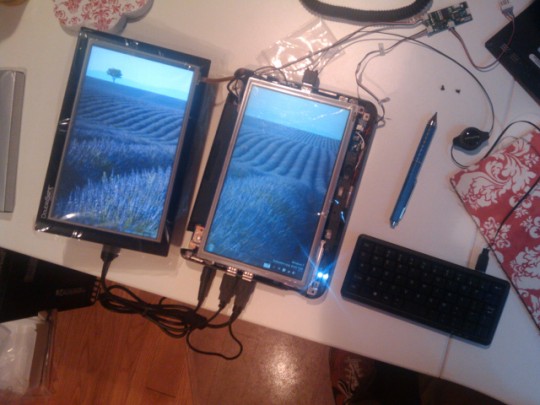