Chinese company Haier, which entered the Chromebook market last year with its ultra-cheap Chrome OS laptop, is back with another model, and this one has 360-degree hinges. The convertible Chromebook’s display can be folded fully backward, putting the laptop in tablet mode. Though pricing details haven’t been revealed at this time, we do know it’ll be arriving in the U.S. in the next couple of months.

A prototype of the Haier Chromebook HR-116C was spotted at the Intel Developer Forum in China recently by Notebook Italia, which says the display can be folded back a full 360-degrees. This allows users to position in both “tent” and “tablet” models, the latter of which means it also features a touchscreen display. 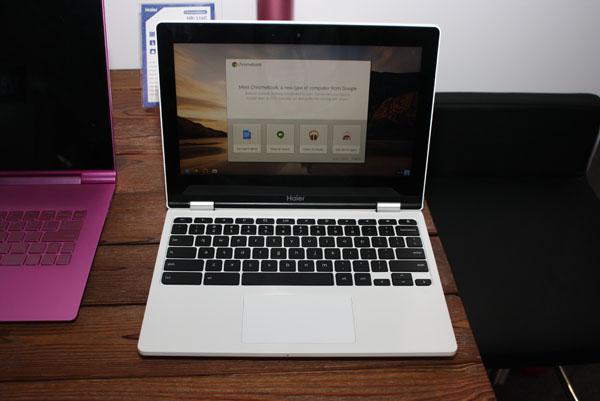 The convertible Chromebook is said to be made of polycarbonate and is white in color with a weight of 2.5lbs. Under the hood lies an Intel Celeron N3060 1.6GHz processor, but there are other options available — up to a 2.48GHz processor with Turbo Mode or an Intel Celeron N3160 Braswell 1.6GHz – 2.24GHz. Both 2GB and 4GB of memory are available, as well as 16GB and 32GB of storage.

The Haier Chromebook HR-116C will arrive in the U.S. in June.