Some of the technical details behind Google’s Project Loon were revealed in a recent video explaining the inner workings of one of its global Internet antenna balloons. Network engineering lead Cyrus Behroozi popped off the top half of one of the bulbous shells to point out the various parts of its two main components: a radio and the antenna itself. The design, Behrozi said, was intentionally simple, but it could become more sophisticated over time as the prototypes continue in their development.

The top part of the interior of the shell is composed of a reflector disc, a pair of parallel patch antennae (radiating elements) perched a few inches above the disc, and a pair of cables leading down to the radio, which lives in the bottom half of the bulb. The patch antennae receive reflected radio waves from the reflector disc as well as direct waves. The two sources “interfere constructively for the correct wavelength that we’re trying to receive,” Behroozi explained.

The circular shape of the reflector determines the profile of the signal being relayed. It was so designed to accommodate signals coming from all angles due to the drifting deployment of the balloons in the stratosphere, where slow-moving wind currents circulate the floating network of balloons all over the globe. The design allows for a uniform signal strength no matter where the balloon is overhead. 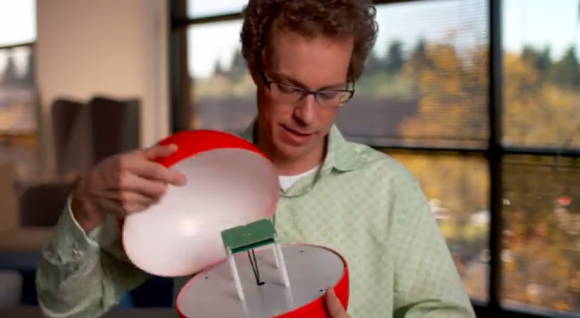 The balloons transfer signals among one another as well as to end receivers on the ground, which are non-dish antennae attached to buildings for clear reception from all angles. Ultimately the goal of Project Loon is to deliver Internet connectivity to people in rural areas and undeveloped nations, bringing on-board the two-thirds of the world’s population that currently have no Web access.