Periodically, Google adds new games to its Stadia Pro lineup, which are games that are free to play for anyone who has an active Stadia Pro subscription. Today, Stadia Pro got a whopper of a free game: PlayerUnknown’s Battlegrounds, which is arguably the biggest free game offered through the service yet.

PUBG‘s launch on Stadia was announced today in the latest Stadia Connect, which was a bit unlike the other Connects we’ve seen as Stadia boss Phil Harrison had to record it remotely. In any case, PUBG is free to Stradia Pro members beginning today, though folks who want to own the game permanently can pick up the Pioneer Edition for $39.99 or the Chicken Dinner Edition for $59.99, with the latter including the PUBG base game, the Cold Front Survivor Pass, a Stadia-themed skin set, 6,000 G-Coins, and 6 different PUBG skin sets.

That $59.99 price tag is actually a discounted price that’s only available until May 27th. It looks like the Chicken Dinner Edition is also a limited time bundle that will go away on July 20th, so if you want to own it, you’ll definitely want to buy before then. 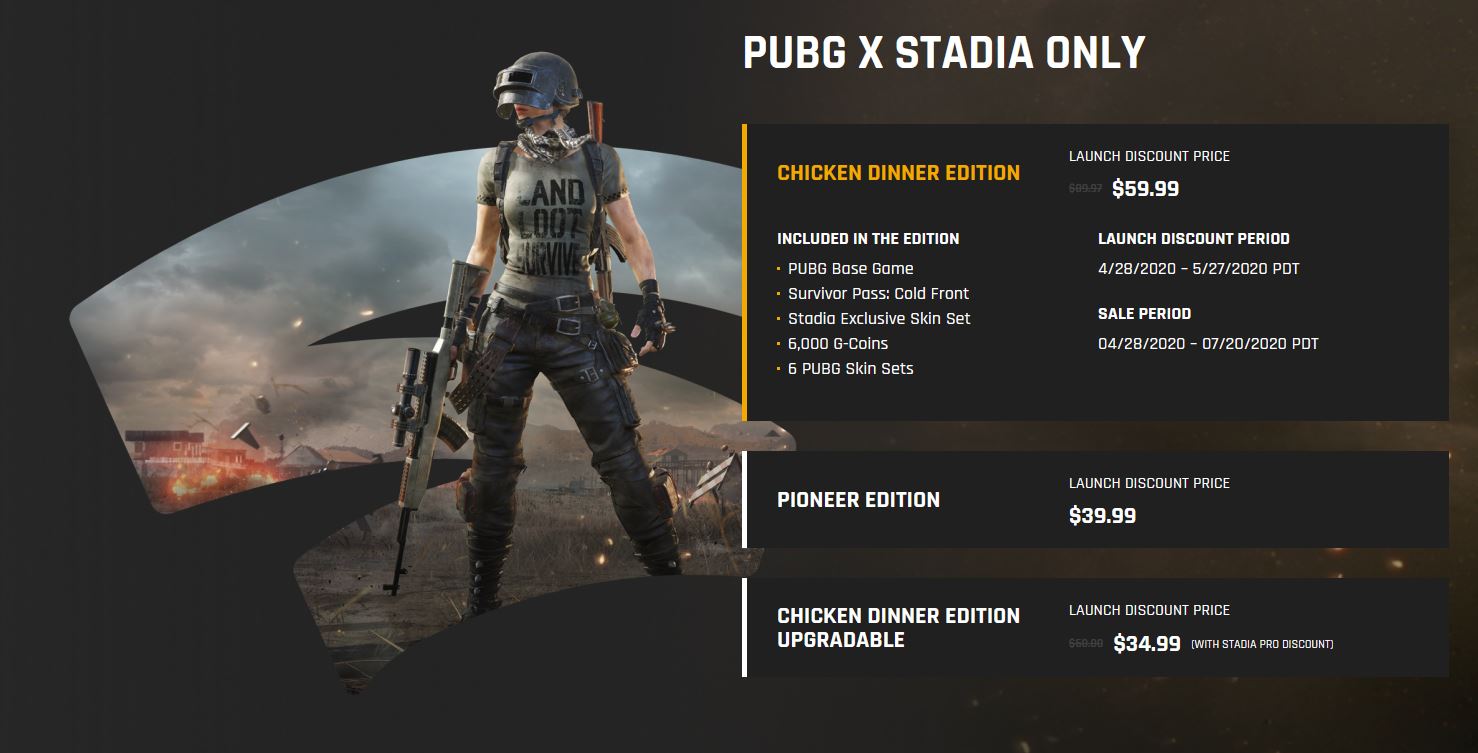 Pretty much everyone can play PUBG through Stadia for free at the moment, as Google is offering two-month free trials of Stadia Pro in 14 countries around the world. If Google was looking for a game that would get people to take the bait and sign up for that two-month trial, PUBG is certainly one of the stronger titles it could have gone with.

Chicken dinner is on the menu. Play @PUBG with no downloads, no updates, and no waiting. Now free on Stadia Pro: https://t.co/N4IcqvtHvY pic.twitter.com/SweUnIn5Rt

In addition to announcing the launch of PUBG today, the Stadia team also revealed a number of games that are heading to Stadia in 2020. Chief among them? Certain titles from Electronic Arts, including Star Wars Jedi: Fallen Order, FIFA, and Madden. Harrison says that there will be five EA titles in all added to Stadia, with Fallen Order slated to be the first to go live this fall. More details about those are coming in the future so we’ll keep an eye out for that – in the meantime, check out today’s Stadia Connect for more upcoming releases.