Today Google released a research paper called “Three years of the Right to be Forgotten” for peer review. It’s been nearly four since Google’s “Right to be Forgotten” tool went live in the aftermath of an Euro-centric Google listing legal ruling. This Right to be Forgotten service was launched by Google at the tail end of May, 2014, and it began its life in a wildly popular manner, finding 12,000 requests inside its first 24 hours.

The European Union ruling took effect in mid-May 2014, and Google’s tool was in the works shortly thereafter. By November of 2014, other search engines like Bing and Yahoo also began accepting requests. The ruling has not been made in the United States, and likely won’t be in the near future.

In the research paper posted by Google this week, Google described the first three years (May 30, 2014 – December 31, 2017) of Right to be Forgotten. In that time, nearly 2.4-million URLs were called upon to be delisted by Google, a third of which targeted social media and directory services. The next most popular set of types of sites for which RTBF URLs were requested were news outlets and government websites.

The first category generally targeted “personal information” while the latter was mostly requests with regard to “legal history.” Aside from the first two larger categories, Google suggested that 47% of requests came from “a broad diversity of content on the Internet.”

Google suggested that 85% of requests came from private individuals, and that 51% of all URL delisting requests came from France, Germany, and the United Kingdom. A pack of 1,000 requesters which filed 15% of all requests included “many” law firms and reputation management services.

Over the period of a bit over three years, from May 30, 2014 through December 31, 2017, 2,367,380 requests were made of RTBF, coming from 399,779 requesters. Of that 2.36-million requests, just 395,907 unique hostnames were called upon. That means there are just a few websites out there with the vast majority of the URLs that people want gone from Google search results. 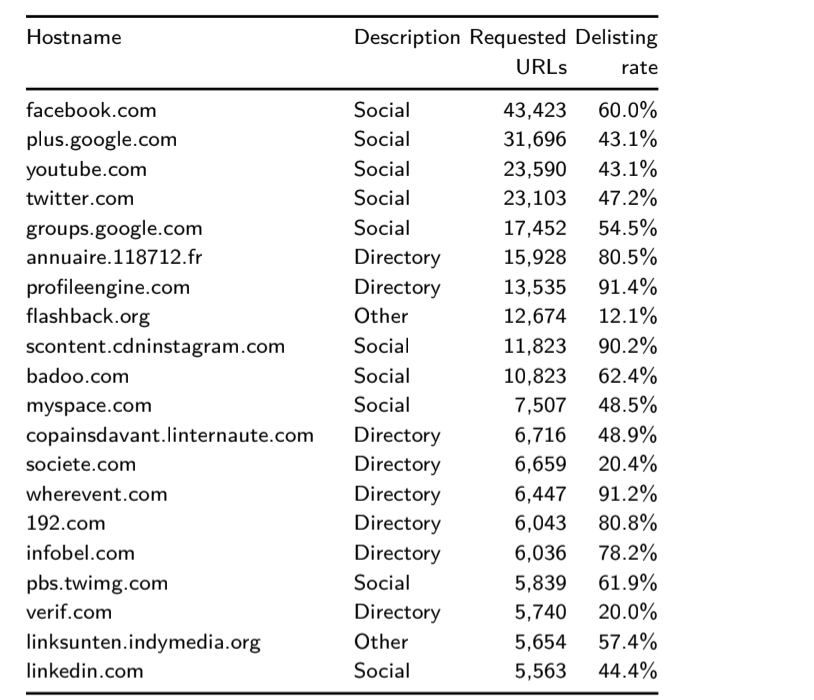 Above you’ll see the top URLs for which requests were made. On top of the list was Facebook with 43.4 thousand requests, followed closely by Google+, then YouTube and Twitter in close contention for 3rd and 4th place. Notice the delisting rate on each of these items. While Facebook is on top for requests, these requests only resulted in delisting 60% of the time.

Requests are declining, and won’t likely appear a whole lot more in a decade or so – unless Google or some government service promotes the tool’s existence. Cross your fingers it comes to the United States some day soon!

For more information on Right to Be Forgotten, have a peek at the “Three years of the Right to be Forgotten” paper hosted on Google Drive. That paper is authored by Google’s Theo Bertram et. all, and is currently under review by the PoPETs – that’s the Proceedings on Privacy Enhancing Technologies Symposium. To find the actual Right to be Forgotten tool, you’ll need to go to EU Privacy Removal on Google – and yes, that was not easy to find.