Google “right to be forgotten” tool should be global says EU

Google’s “right to be forgotten” tool was grudgingly implemented in Europe back in May, but now privacy regulators are pushing to scale up the web search censoring system to cover global results, not just those localized to countries in the EU. The ruling – which affects all search engines operating in Europe, though Google is the clear leader with an estimated 90-percent market share there – allows individuals the right to request the removal of links to information “inadequate, irrelevant, or no longer relevant,” and at launch saw 12,000 requests in a single day.

The controversy over whether Google and other search providers should be responsible for “cleaning up” the internet aside, lingering arguments have raged over where, exactly those results should be removed from.

Currently, Google is deleting the results from its localized, country-specific pages. So, while a granted “right to be forgotten” demand might see the contrary link pulled from Google.co.uk, or Google.de – the UK and German versions of the site – it would still be available through Google.com.

However a new set of guidelines developed by the European Union would change that. “All the extensions are included,” EU privacy watchdog chief Isabelle Falque-Pierrotin said today in Brussels, “including the .com.”

It’s not the only aspect of Google’s implementation that the privacy group has taken issue with. Currently, Google notifies websites and news organizations if they have been subject to a successful “right to be forgotten” request, something Falque-Pierrotin argues there’s no requirement for. 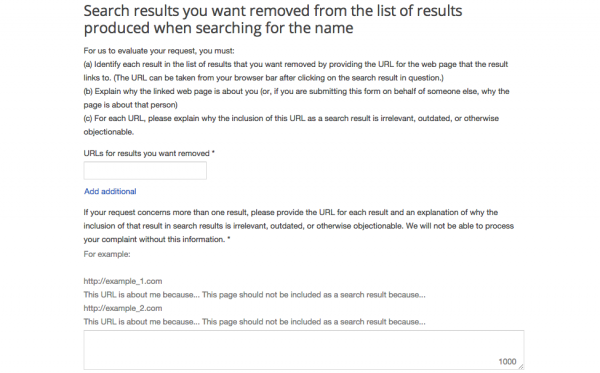 “There is no legal basis for routine transmissions from Google, or any other search engines, to editors,” she claimed, taking issue with Google’s argument that it is an obligation, and countering that while it might “in some cases be necessary,” it should certainly not be the routine.

The EU’s own research suggests Google.com use within European countries is still relatively low: less than 5-percent of queries come through the page, it’s said. However, the privacy watchdogs are concerned that the ease of finding excluded results simply by switching domain could undermine the effectiveness of the ruling as a whole.

With Google and other search engines yet to comment, it’s unclear how they’ll react to the proposed changes to the policy.

The search giant’s latest transparency report, released in October, suggested that over 41-percent of requests had resulted in links being removed. French users submitted the most take-down requests, followed by Germany, with Facebook links the most commonly complained about.