Google has launched an offensive against the initiative before it’s even announced, emphasizing that the conference will quite likely be deciding new international internet rules without including tech companies galore as well as billions of your everyday average web users. Google is concerned not only that they, as a company, will not get a say in the decisions being made there, but that the ultimate ruling might limit what their customers and general users are able to do with the web – this is bad for business, of course.

At the moment, non-profit groups like ICANN work to regulate the bits of the internet that are reasonable to regulate – they being under the wing of the US Government in the end. Google notes that starting December 3rd, groups like ICANN could become entirely irrelevant. The meeting of the International Telecommunication Union will be “behind closed doors” – so Google says – and some of the governments involved will certainly be attempting to use said meeting to “increase censorship and regulate the internet.” 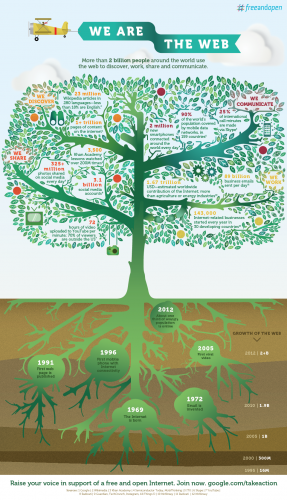 Google’s own Google+ Account made it clear how important this issue could potentially be. They’ve also created a lovely infographic about the history of the internet, starting back in 1969 when the internet was born and moving on up to 1 trillion pages of content on the internet and 2 million new smartphones connected around the world every day. Have a peek at the full-sized graphic by clicking the image above.