It wasn’t because Google was close to a final product in the least bit that they showed off their heads-up user interface-toting Project Glass glasses this week – this device is still very much in pre-pre-production. As Project Glass gains massive amounts of feedback from prospect consumers after a very well-received preview in video form (shown below), it’s a harsh reminder by Google co-founder Sergey Brin today that stings the ears: an actual consumer product is “many months, if not years” from reality.

That said, today’s second-hand showing of the device Google has ready now is suitably impressive – Brin wearing the device in real life with Robert Scoble looking on and Thomas Hawk snapping photos. “Give us time” noted Brin upon being asked how long it will be before the glasses were going up for sale – Brin appeared with the glasses at a benefit for the Foundation Fighting Blindness “Dinner in the Dark” in San Francisco, California. 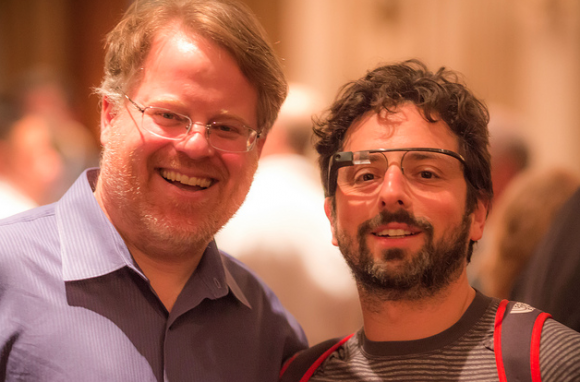 The curious of course might wonder if the pair of glasses (if you can call them that) Brin was wearing were working – you’ll be glad to know that indeed they were. As Scoble tweeted:

“Sergey wouldn’t let me wear the Google Glasses but I could see they were flashing info to him.”- Scoble

Can we hope for a release inside 2012-2013 perhaps? Let’s hope so! Now whether we’ll actually be able to stand wearing them on a daily basis: that’s a different conversation entirely.