App Annie released their year-in-review for 2014 today, and among all the charts and figures, one stood out. Navigating the ins and outs of Android and iOS is intriguing, with Android commanding the lion’s share of market percentage. Even with that, iOS users are time and again shown to use their devices more often; shopping more, browsing with greater frequency, and spending more. According to App Annie, Google Play’s download numbers have outpaced the App Store in a big way, but spending trends the opposite direction.

As you can see in the charts below, Google Play has roughly 60% more downloads than the App Store. Versus 2013, the App Store remained quite still with regard to downloads, edging up slightly over twelve months. Google Play, though — meteoric rise. 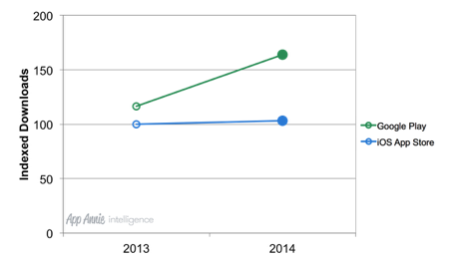 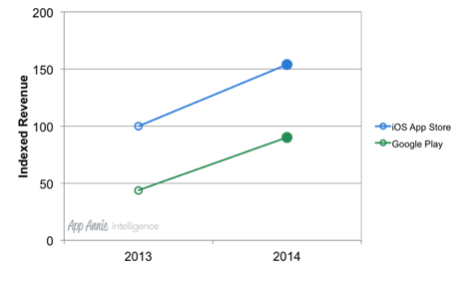 That can be attributed in small part to paid apps and the insane sales numbers the iPhone 6 saw, but the real reason for the App Store monetization comes via worldwide markets. According to App Annie, iOS remains strong in three key markets: United States, Japan, and China. The United States, Japan, and South Korea combine for more spending than the rest of the world combined, and China is just now realizing the strength of its smartphone market.

Apple and the App Store are strong in the strongest markets for monetization. By comparison, Google Play’s second strongest market is Brazil, who combined with China, India, and Russia make up less than less than 1/3 of spending that those stronger markets do. That group was second to the US, Japan, and South Korea in terms of growth, though.