The Google Nexus One footage continues to arrive in dribs and drabs – seriously, someone sit down with this Google Phone and shoot a good ten minutes of video, we’ll all thank you for it – with the latest from new blog The Nexus One being a clip of the handset booting up while sat on top of what’s purported to be its packaging.  There’s also this shot of the handset showing its on-screen QWERTY keyboard. 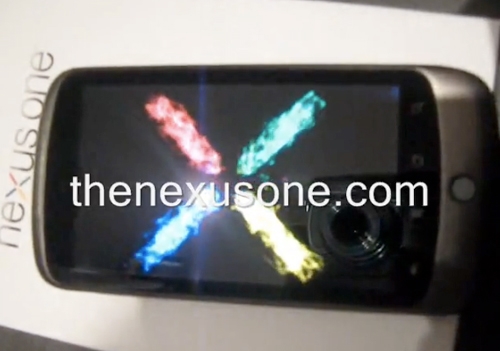 As the first image shows, it doesn’t look like Google have done much to tweak the Nexus One’s keyboard layout.  We’ll have to wait and see as to whether they’ve “borrowed” some of HTC’s excellent predictive text and auto-correction functionality; if so, considering the Nexus One is expected to be a pretty much pure implementation of Android 2.1 we can expect the same in other devices less topical than this.

Still no word on whether the man in the street will be able to pick up a Google Nexus One, and even if so how much it will cost him.  Check out our summary of the Nexus One rumors for more details of the story so far.