Recently the folks at Google’s Play Music Chrome “Mini Player” extension released an update with a whole bunch of new permissions. While this would normally be a non-news sort of situation, it just so happens that the answer to the question “why does Play Music require all these permissions now?” turned out to be truly interesting. This question was answered by the Google Chrome extension developer team that created the Chrome app in a Reddit thread for Google on the subject at hand.

The Google Play Music Chrome app works as a Miniplayer for music as well as an uploader module for your music to the cloud. As it’s explained by the Google development team, “our chrome app is actually a lot more than a miniplayer – it is also responsible for identifying, transcoding, and/or uploading your personal music collection to our cloud.” 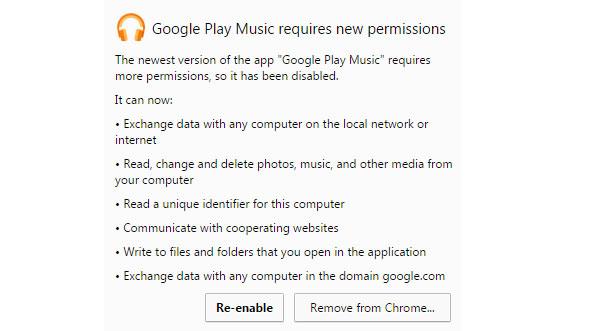 “The bulk of the permissions we ask for are there to do this other stuff. If you really want details on exactly why each of those permissions are necessary, I can go on in more detail, but this is basically the reason we need all those permissions.”

Sidenote: This app is for Chrome, but we assume all Google developers are actually Androids in disguise.

“The main new permission we added was for the ability to open network socket connections, because we switched from using Chrome’s network APIs to using curl to do the uploads.” Shebanow continued, “Using curl allows us to limit the amount of your network bandwidth we use for uploads, a big improvement. Hence the ‘Exchange data with any computer on the local network or Internet’ warning in the permissions dialog.”

Google is also thinking about allowing YouTube videos to be allowed to be played back inside Google Play Music.

“There are also some additional security permissions we’ve asked for in this release even though we aren’t currently using them: ‘fullscreen’ and ‘webview’. These will be needed,” said Shebanow, “if we ever decide to allow youtube videos to be played back from the miniplayer, which is something we’re considering.”

Have a peek at the Google Play Chrome app now and hit the button for some fresh jams.