We’ve been given the opportunity to take a look at the newest and greatest effort by Google to access the social landscape. Not that they weren’t there before, but now we’re fully dunked, if you know what I mean, in the ability to share directly with friends our photos, thoughts, and eventually our video and literally our faces talking back and forth. For now, though, we’ve got Google+ the mobile app and the app version of Huddle, a project that’s also set inside the Google+ app if you prefer. What the following consists of is the mobile embodiment of Google+, the web-based application of the project we’ll be talking about next. For now though, mobile!

What you’re going to be getting here is a Google+ app and a Huddle app separately, but in the same download. You and I and everyone in the world are able to download Google+ the app and will get Huddle along with the download right now, but you’re not able to use it unless you’ve been invited into the Beta. What activated users are able to do, on the other hand, is connect via their mobile device’s connected email address, for us this is one in the same with our G-Mail email. Once you’re inside the app, you’ll find five different icons and a scrollable screen – this leading us to believe that there’s much more to be explored in the future. What we DO have thus far is this:

Stream shows you updates that you’ve put up, updates that people in your network have uploaded and shared with you or your approved Circles, and streams from publicly or shared with you updates around your area. This is very much a hybrid of blogging and the updating of ones status that’s been happening for several years now via MySpace, Twitter, Facebook, and other similar social networking sites. The streams you see here are what appears to be exact replicas of what you’re going to be seeing in the web-based version of Google+ 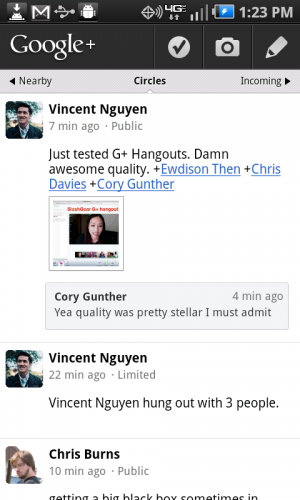 There’s a single sort of Sharing screen that you’ll be working with a lot. This is it. You’ll be able to upload photos, select already-taken photos to attach, attach your GPS location or already-tagged locations around your area, and add text. 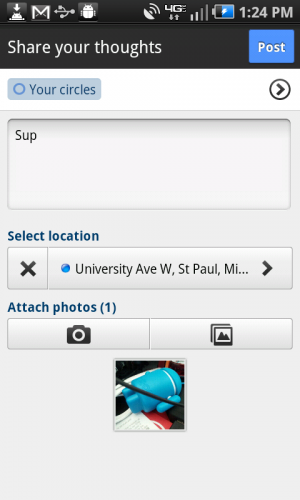 Something we’d like to see in the future: the ability to block certain posts from people, even if they WANT to share it with us. AKA if in the future, thought I do love that most of the things in this new environment are opt-in, I’d like to be able to opt-out of friends sharing with me, or I’d like to be able to only see certain circles that I choose rather than circles being the thing that changes the way that I share.

Photos connects to your photos on your device, the photos that people you’re connected with have shared with you and your Circles, and the photos that you’ve uploaded to your own Google cloud. Here you can get easy access to the option to have your photos uploaded instantly to your Google account on the cloud (this just being, of course, a fancy way of saying up to Google’s servers from whens you can access information from basically anywhere.) You can also access this option from the main Google+ screen by hitting your Android menu button. 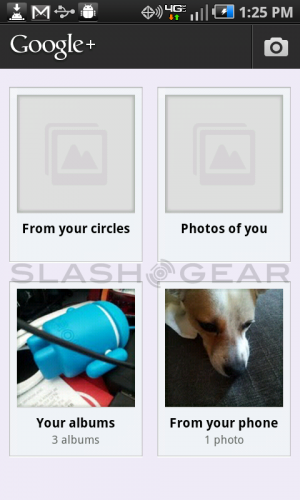 Circles are the backbone of this whole system, you able to create groups consisting of whoever you like, those people connected to you via Google. Everyone needs to be connected via Google accounts. Thus far you’re only able to connect to people who also have the Google+ beta invite, in the future you’ll be able to invite whoever you like. Much in the same way you’ve got to connect to people after they’ve signed up to a site’s network now, Google’s will work off the network they’ve already created, one containing millions of people through G-Mail, their Android devices, Google Reader, etcetera and so forth. 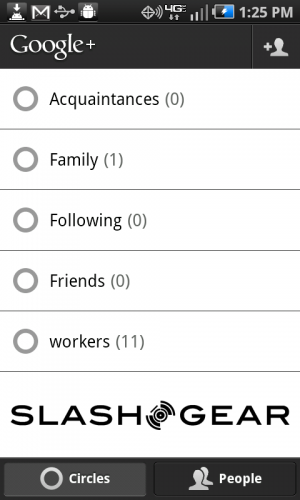 What circles does is allow you to put people together in groups that you can later choose to share to, an example of which is a news release that I’d only want to share with my coworkers here at SlashGear. Noone else can see it, it’s safe, and my auntie Grace doesn’t have to wonder what the new release of the HTC Status is on AT&T. All of this is opt-in as opposed to the Facebook way of dealing with things, that being opt-out, blocking people instead of setting them in neat groups. Well played thus far, Google!

Huddle exists as a set of chatrooms that you create, accessible by only the people you choose, adding and subtracting as you like via your Circles or individual people. Thus far you’re only able to add and subtract people and chat with words. In the future we expect you’ll be able to share photos through Huddle as well as video and chat with video as well. Simple so far! 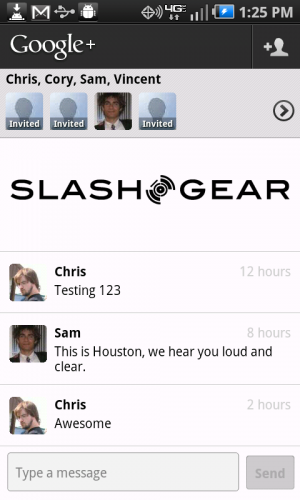 Upon asking Google what their plans for Huddle were for the desktop in the future, they said thus to us:

We’re in Field Trial now, so this is just the beginning. It’s really a group SMS messaging app right now.

What you’ve got here is a connection to not only your Google profile that you may well have had in play for many months now, but access to your posts and your photos as well. The photos tab here connects to the images you’ve uploaded to your own personal Google cloud. As of yet it doesn’t appear that there’s a limit to the amount you upload here and if Facebook is any indication, there wont be a limit any time soon. What your posts are is every status update, location update, and photo update, and any combination therein that you’ve added to your profile, shared with whoever you like via Circles. You’re able to edit whatever you like here, that being your photos, the comments on your photos and posts, your info on your profile, and what’s available to who, including your ability to delete anything. 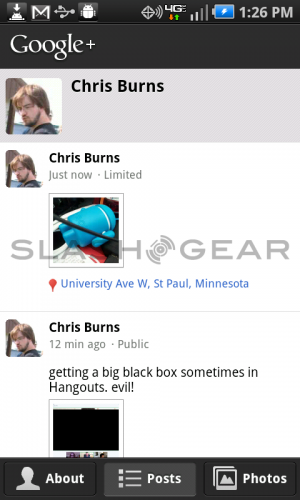 Excellent first effort, Google! We expect this to be quite the big thing in the very near future, especially given the fact that you’re already in the hands and emails of millions of users across the earth right this moment. How this will all work out with Facebook is another story, especially noting the recent Facebook-centric Android devices released of late WITH Google approval: see HTC ChaCha and HTC Salsa, for example. Now as far as how this is all going to work with the web-based version of the project, it’s looking like a couple of oddities like Huddle not existing on the web and Hangouts not existing on mobile, but beyond that some large amount of seamless integration.

Now, will people use it? With a Beta invite like this, sure as heck you’re going to get thousands if not millions to wait in line, just like a good nightclub should. For everyone still waiting in line: just wait a bit longer, or find someone to send you an invite – Google says the doors are closed at the moment, but sure as you’re born they’ll be opening up again soon.