Though the final frontier may be space, and according to some the ocean of water that surrounds us here on Earth, Google has decided that it’s inside buildings – and that’s exactly where it’s going with it all-encompassing Google Maps environment. You’ll be able to work indoors with Google Maps 6.0 for Android, for example, using “My Location”, which will soon show you as a blue dot on a map of the location you’re at, including both outdoor AND indoors. No longer will you have to act as a car to get to where you need to be should you simply have a pair of shoes. Nothing but fun ahead!

Google Maps new indoor features will help you get around two of the most labyrinthian locations in your everyday life: airports and malls. One of the first malls to be mapped will be one of the largest in the world, the one not 20 minutes away from your humble narrator’s abode: the Mall of America. You can back out and see the whole mall, or move in close to see your nearby surroundings including current stores, exits, and most importantly, bathrooms. You can choose which floor your own, where you want to go, and switch over to your car with only a couple of taps should you want to head to the nearby IKEA across the street.

You can take a peek at a couple of demonstration videos here, first on the airport feature, then one on the rest of the Google Maps Indoors push as a whole – enjoy the animations! The first locations to participate are first the Mall of America along with several chains like IKEA, Home Depot, a handful of Daimaru, Taskashimaya, and Mitsukoshi stores, and select Macy’s and Bloomingdale’s locations. As far as airports go, currently you’ll be able to explore Hartsfield-Jackson Atlanta International Airport (ATL), Chicago O’Hare (ORD), San Francisco International Airport (SFO) and Narita International (NRT). We’re hoping for Minneapolis International Airport (MSP) to come on soon since the Mall of America is literally 10 minutes away – how about the full experience, Google?

Then for those of you who own businesses and want to get in on the fun by submitting your own floor plans, head over to maps.google.com/floorplans and join in! There’s nothing we love more than Google getting on every street, every city, every business, and someday every home! Map the entire planet! 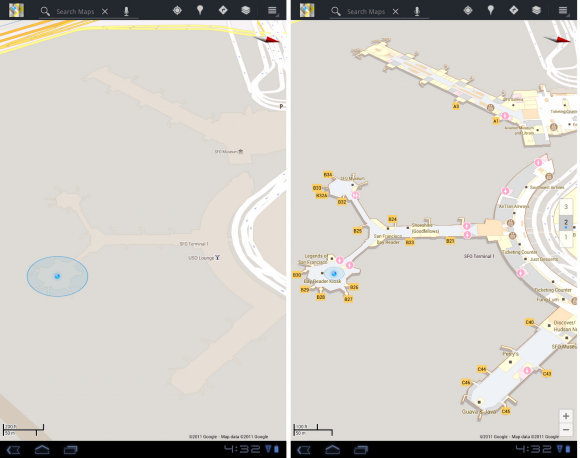 UPDATE: I stand corrected! Google has informed your humble narrator that there is indeed a brand new look for Minneapolis International in this version of Google Maps, complete with indoor maps galore! Have a peek at the hands-on with this map here: