Google may not have won the living room yet, but it isn’t ready to call time on Android TV. As the Google Assistant continues its spread through smart speakers and, more recently, smart displays, it’s the biggest screen that the search giant has set its sights on. Now, fresh research shows just how important the TV is – and where connected TVs could leverage Google’s strengths in the smart home.

What doesn’t really come as a surprise, in the survey of more than 2,000 people Google commissioned from YouGov, is that streaming is on the rise. The TV is still the preferred way to consume content, too. Even with most of us constantly within arm’s reach of our smartphones, 48-percent of the people asked watch content on their smart TV, and 38-percent on a traditional TV. 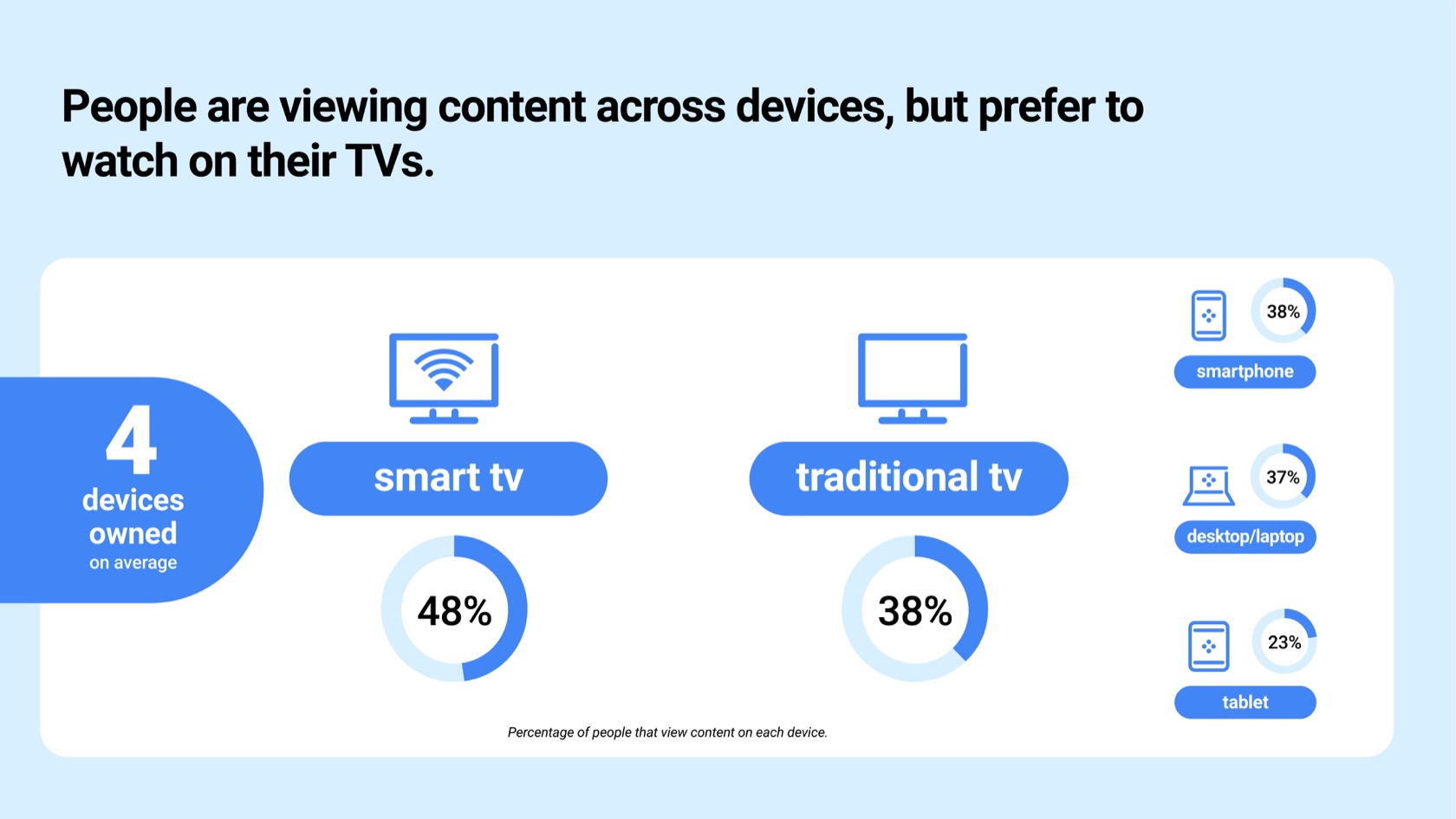 The phone is catching up, mind. Indeed 38-percent of people surveyed said they consume content on their smartphone, along with 37-percent on a desktop or laptop PC, and 23-percent on a tablet. The average person owns four devices, and multi-tasking is commonplace: social networking, or messaging, are two of the most common second-screen activities.

Part of Android TV’s focus, then, senior director of product management and head of Android TV Shalini Govil-pai explained to me, is cutting through some of the most common headaches that devices like smart TVs, Apple TV, Fire TV, and other set-top boxes haven’t yet fixed. “We are Google and we thrive on search and discovery,” she says, “do we make it really easy to find things?” 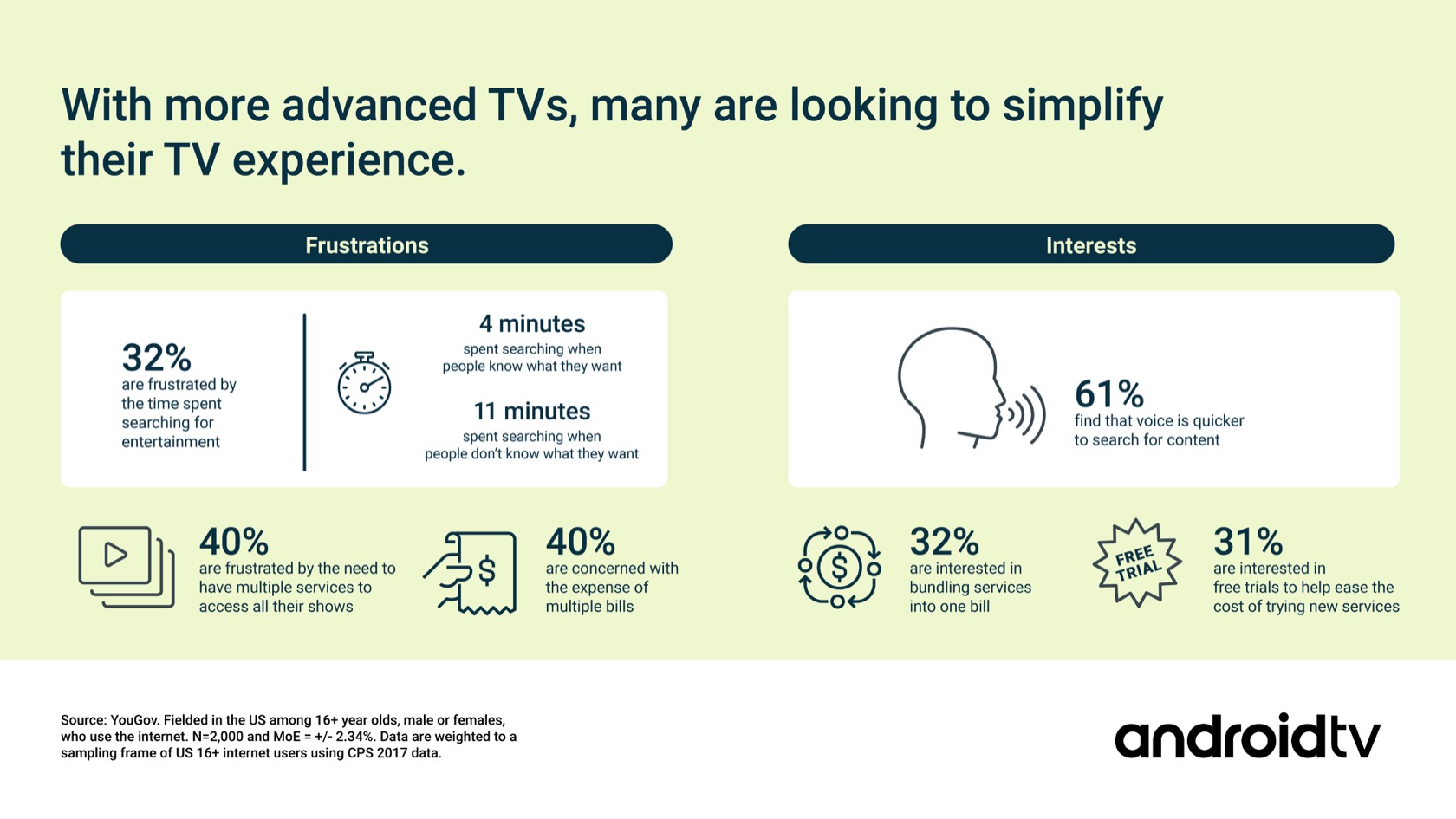 For that, voice and clever algorithms are the combination Google is betting on. We’ve seen voice search on TVs and streaming adapters before, but Google is encouraging Android TV partners like Sony, Hisense, JBL, and others to borrow technology like far-field microphone arrays from gadgets like Google Home. That means your TV could have microphones built-in, listening out for the “Hey Google” wake-word, rather than demanding you press a button on the remote and talk into it.

The hope is that attentive TVs and the search engine behind them will be enough to address one of the big issues YouGov’s research identified: content discovery. With so much to choose from, across so many services, it can take a significant length of time to actually pin down something to watch.

On average that’s four minutes, assuming they know what they want, or 11 minutes spent searching when they’re looking for something new. That actually may be on the low side: other research Google has carried out, Govil-pai explained, has found it can be closer to 30 minutes. That’s an episode’s worth of hunting before you’ve even found a show.

Clever compound searches are part of what Google is doing to address that. You can ask not just for action movies, for example, but action movies in French and from the last five years, and the Assistant will not only serve those results up, but Android TV will flag where you can watch them free through services you might already subscribe to. 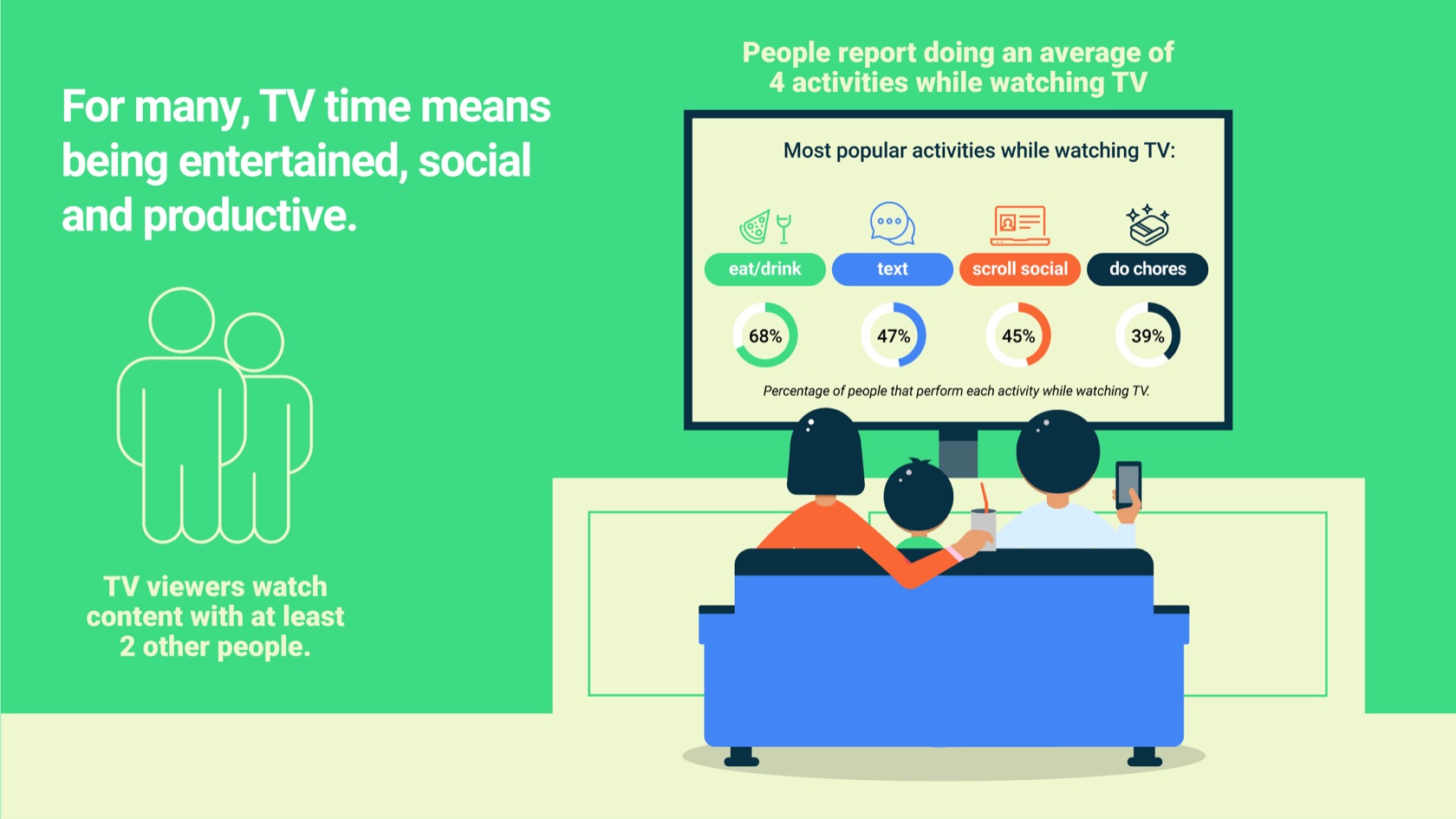 62-percent of people found it quicker to do voice search to find something to watch, Google’s research suggests, though there’s still room for improvement. In the demo it showed me, Android TV’s ability to highlight content that was bundled with subscriptions proved a little patchy. Then there’s the question of freshness.

If you’ve used Netflix, or Hulu, or iTunes, or any of the other streaming providers much lately, you’ll probably have got the impression that there are certain shows they really want you to watch. Sometimes it’s like you’re scrolling past the same titles over and over again, waiting desperately for something new or just different to pop up in-among them. The end result is that, even with catalogs containing hundreds of thousands of potential movies and shows – more than 500,000 on Android TV alone – you could easily think that there are just twenty or so.

“Freshness is always a concern for us,” Govil-pai told me when I asked about that challenge. As we’ve seen, investment in original content is a big deal for streaming providers, and it’s little surprise that they want to keep pushing the media they’ve paid handsomely for. All the same, it’s unclear at this stage how Android TV will actually shake up that deja-vu when you’re scrolling.

Android TV is about more than just your shows

The other big area Google is focusing on in the living room is the TV as a hub. 79-percent of people asked in Google’s survey said they’d be interested in controlling their smart home through their TV: lights, cameras, speakers, and connected thermostats were some of the most common things on the wish-list. 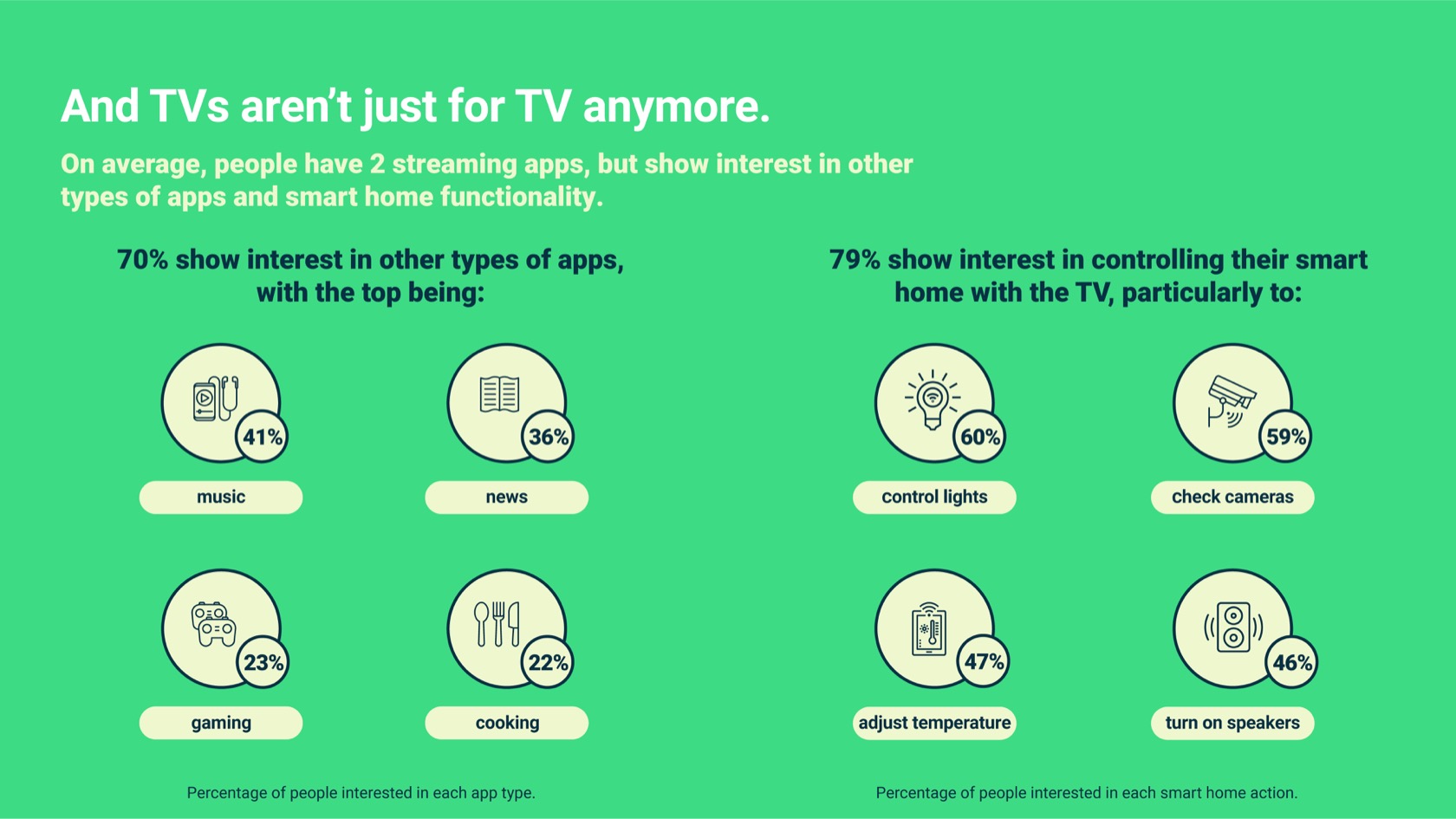 Ironically, a lot of that is already possible. If there’s a problem, it’s that actually figuring out how to use it – and how to set it all up in the first place – can be a hurdle too high for many.

“It’s still really hard,” Govil-pai points out. “The actual setup is really difficult, and that’s what we’re working on. How do you make it brain-dead?”

The ubiquitous Assistant will help there, some. Just as we’ve seen the straightforward setup process on the Google Nest Hub Max and other smart displays recently, bringing all the connected devices in the home together in a relatively simple panel organized by room, so Android TV will benefit from that process. If you’ve already established smart home devices in one place, signing into your Google account on an Android TV should grant access to them there, too.

In the pipeline are new voice control options. Soon, Google says, you’ll be able to access Assistant routines through Android TV. Say “showtime,” for instance, and you could have your connected blinds automatically close, your smart lights dim, and your content of choice cue up on the big screen. Other voice commands familiar from smart displays, like “show me the nursery camera,” will also be supported.

“Hey Google, dumb this down – but just enough

Android TV has plenty of competition, though Google prefers to look at streaming providers and platform providers as two separate things. You can get Netflix, and Hulu, and HBO, and even Amazon Prime Video, across multiple devices: it’s in their interest, Android TV product lead Cory O’Connor argues, to be as widespread as possible on sets like Sony’s A9G.

The problem Google’s platform faces is the same as its rivals like Apple TV, Roku, Fire TV, and others. On the one hand, people want ease of use and convenience. They don’t want to have to read a support page to figure out how to find their favorite show, or to turn off a lamp.

At the same time, though, make things too dumbed-down and they start to seem two-dimensional – and less useful.

Google arguably has an edge there that some of its competition lack: its ability to take the masses of user-data it has compiled on us over the years, and both shape recommendations and enact shortcuts that potentially make our experience in front of the TV more rewarding but without seeming more complex. While the search giant talks a good game with that, right now I don’t really feel like we’re seeing much of it in practice.

For all Govil-pai and O’Connor say they’re “very bullish” on far-field microphones and fixing the “what should we watch?” question, I’m still not convinced that Android TV in its current state actually does that with much more effectiveness than voice search on other platforms. It’s certainly getting interconnectivity right – the new stream transfer ability launched this week, to shift playback between speakers, smart displays, and Cast-enabled TVs by voice – is a great example of that. Now it just needs to bring its algorithms to bear on actually finding us something to watch.