The new “Helpouts” program by Google connects experts with people in need of answers via Google Hangouts and Google Plus. But the human help engine is only the technological evolution of a series of Google products designed to fulfill the same purpose. Its now-defunct Knol and Answers products are cases in point.

Knol was designed to compete with commercial how-to site eHow and non-profit Wikipedia. As with Helpouts, users could apply as experts to write articles. Searchable through the Knol site, the articles could theoretically be relied upon as useful sources of knowledge. Launched in 2008, Knol was ultimately not embraced by the public–possibly due to its limited ability to produce articles in large volume–and the service was shuttered on Oct. 1, 2012.

Google Answers was even more similar to Helpouts, in that users could ask questions and experts would answer them directly. This service was much more “Web 1.0” in nature, as it was completely text-based via the Answers site. It debuted way back in 2002 but closed in 2006. A Russian version of Answers also existed. The topics and categories of Answers are very similar to those of Helpouts, which appear to be just an update and reshuffle of its predecessor. 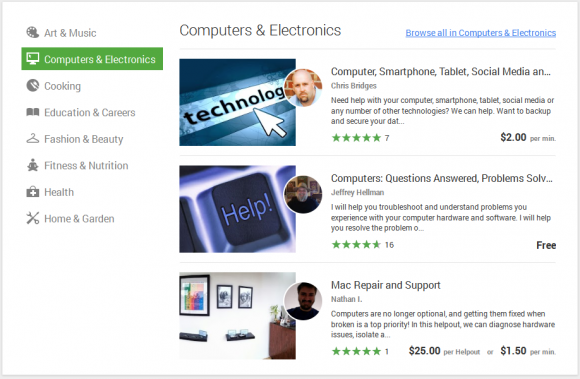 Google has never really given up completely on the concept of a human answer engine. Even though the company closed Answers seven years ago, it acquired the Aardvark human answer engine in 2010 and sat on it. Perhaps it used some of the underlying technology of Aardvark to inspire Helpouts. Whether Helpouts ultimately takes off remains to be seen, but its integration with Google Wallets–a technology not around during the heyday of Knol and Answers–might help Helpouts scale to whatever size is necessary to keep the service alive and well in years to come.