If you’ve seen the photo shoots that’ve come out thus far for Google’s Project Glass, you know good and well that they’ve taken just as many photos of the device on the heads of women as they have of men. The idea that the device will not be as appealing to the feminine side of the equation here is about more than just the idea that women will or will not want to wear the first wave of Glass as it appears on the market, but according to a couple of sources we’ve had a peek at this week, there does seem to be some concern that only the distinctly male amongst us will want to go “wearable” with Google in 2013.

First you’ll want to see what TechCrunch has whipped up using the results of a recent Google Glass “#ifihadglass” Twitter and Google+ contest. They found that respondents to this content ended up being either massively male or too ambiguously named to tell. Females appeared in these findings as well, but they ended up only appearing as a small fraction of contest-goers: unless, of course, they decided to call themselves men on the internet or decided they didn’t want to be recognized with a distinctly female name (according to that site’s name/gender algorithm.)

Then you’ll be interested to know that Google appears to be reaching out to women with a set of new photo-shoots with female Googlers. While these shoots are limited, this isn’t the first time Google reached out to a female-dominated outlet to see Glass rest on the faces of ladies. Back on September 10th, 2012, you’ll find a Glass-toting DVF fashion show heading down the runway during Fashion Week. 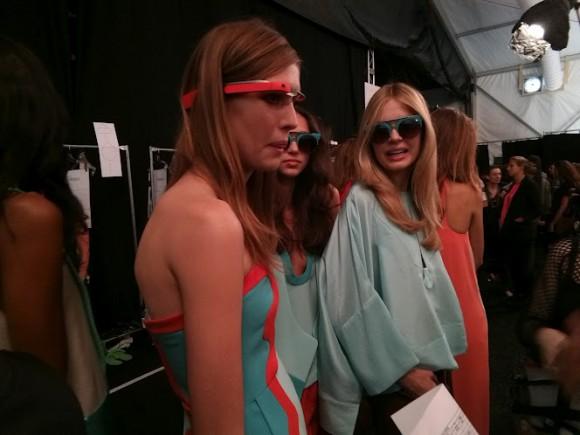 The following photo set comes from Google employees Isabelle Olsson and Amanda Rosenberg, both of whom worked on the DVF show last year. They’re both working on Project Glass and we’re expecting that this isn’t the last we’ve seen of either of them pushing for a continually fashion-forward appeal in the hardware – and how it appears in is final form.

So given that tiny cross-section of instances in which Google specifically addressed how Glass will look on your face, do you feel that your gender will be playing a role in how Google will be marketing the product in the future? How about those of you, specifically, that consider yourselves more feminine than you are masculine: does Glass appeal to you? Do you feel like the appeal here has anything to do with fashion, or is it purely based on how you will or will not be interacting with the technology in the near future?