Google Glass gets song search and Vignetting photos in XE9

Google has updated Glass with audio search as well as a new photography feature called Vignetting in XE9, together with YouTube results in search and Google Apps support for Glass Explorers. Users of the Google wearable can now long press on the touchpad and swipe forward to trigger a new music recognition feature, or alternatively say “OK Glass, what song is this?” to find out what’s currently playing.

As for Google Glass Vignetting, that gives photos from the headset a glimpse at the private display the wearer was seeing. By choosing “Make Vignette” from the menu, a photo is snapped with a screenshot of the display set into the corner, such as showing what route you’re taking on a bike ride, what point of interest you’re being introduced to via Field Trip, or just the time and date of an event.

In search results, meanwhile, there’ll now be select YouTube clips included. The same tap to play/pause, and swiping forward to fast forward and backward to rewind, as has already been used for video consumption will also be supported.

XE9’s other big feature addition is support for Google Apps accounts. So far, Glass has only been compatible with regular Google accounts, leaving those with corporate or business accounts out of the loop. That has a big impact given Glass uses Google Now for each Google account to pull in calendar entries, messaging, and more. 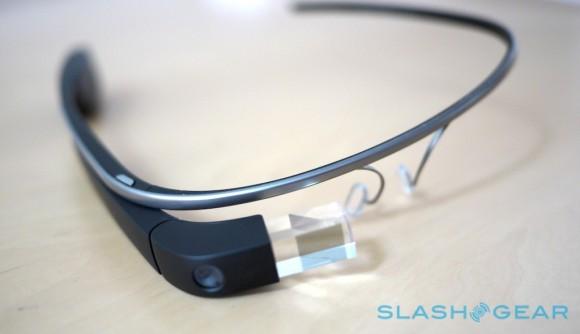 If you want to use your Google Apps account instead, you’ll have to factory reset your Glass headset; unfortunately, there’s still no way to use more than one with Google Now, for instance both your work and personal accounts. Not all features will be included from the outset, however, though the Glass team says email is working now.

Google Glass XE9 will be pushed out to Explorer Edition devices from today.