This afternoon no less than Google’s Sergey Brin send out an update on Project Glass in the form of a special invite-only program in which Google+ will be a place for a limited set of future users of the hardware will be able to get special updates. The first of these updates includes Brin speaking about how he used Project Glass and a brand new app with the hardware to take photos of a trip he was on ever 10 seconds automatically. The one shot he shared was a fabulous in-car photo that might never have existed had he not been using the AR glasses in real life.

Glass is a special bit of technology made by Google that take the form of a pair of glasses with basically some extra-thick rims for all the fabulous technology you could want. Using a brand new user interface shown on a tiny piece of glass that sits up above your right eye, you’re able to control your device with a series of gestures and taps. The side of the device is touch-sensitive, while your head will do the rest. 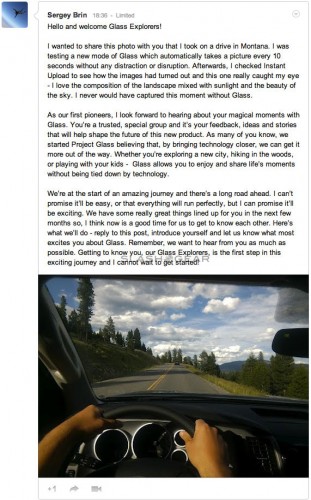 Glass Explorers will be getting exclusive looks at updates through the future similar to the piece you’re seeing above and below here – so no worries, folks, you’ve got SlashGear on your side! That said, at the moment it appears that developers, press, and other attendees of Google I/O 2012 have received the invite thus far, but we’re seeing more and more pop up in our tip bin by the minute.

Stay tuned and hit the timeline below to follow up on all the most recent news bits surrounding Project Glass in all its greatness.