Hit up Google‘s homepage today, and you’ll find the company’s latest commemorative doodle, this time a celebration of the 126th birthday of Modernist architect Mies van der Rohe. Born in 1886 and dying 83 years later in 1969, Mies – along with Le Corbusier and others – is considered one of the fathers of modern architecture, focusing on broad expanses of glass and narrow, discrete metal work, as well as coining some of the much-used phrases of today.

The terms “less is more” and “God is in the details” are both attributed to Mies, and the designer is also responsible for several pieces of well-known furniture. 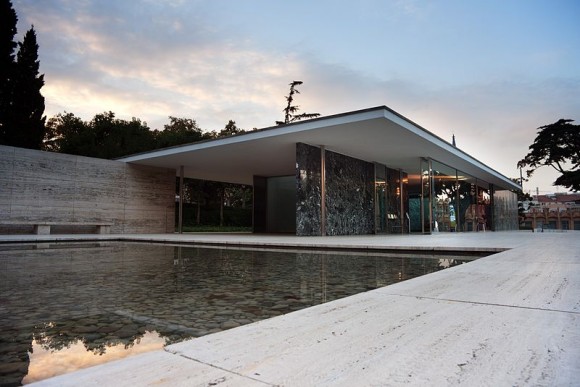 Although the architect began his career producing the neoclassical buildings of the age, he soon began chasing his own interpretation of design for the industrial era. Most iconic is the Barcelona Pavilion, the German Pavilion for the 1929 International Exposition in Spain, “an ideal zone of tranquility” for visitors. Initially intended as a temporary building, it was reconstructed in the mid-eighties after originally being torn down after less than a year on the site.

In the US, meanwhile, Mies was responsible for the Seagram Building in NYC, which was notable – among other reasons – for its use of a broad sidewalk-level plaza. Uncommon at the time, the feature was something the architect had to fight for with the building’s original backers.