Google have announced plans to take on Microsoft and Firefox with their own open-source browser, codenamed Chrome, by releasing a specially drawn comic by Scott McCloud explaining the app.  Based on the existing Webkit rendering engine, Chrome will integrate not only tab-based browsing but Google Gears and a newly integrated search and address system called Omnibox.

Omnibox will replace the individual address and search boxes and offer search suggestions, popular pages and history pages.  It will also automatically replicate a webpage’s own search box, allowing site and query strings to be entered simultaneously.  An Amazon search, for instance, could be triggered by entering “amazon”, pressing tab and then the search term. 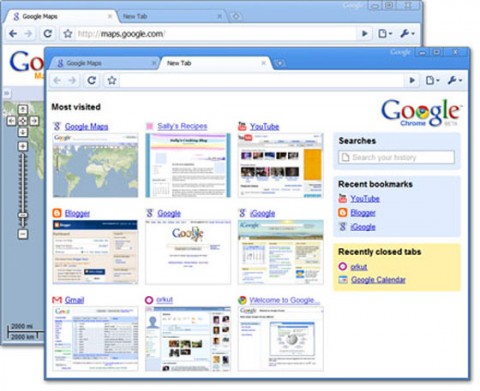 Chrome will also include some of the more popular features from existing rivals.  It will have a homepage of nine instant-access shortcut thumbnails, as found in Opera 9, with a sidebar of recent searches and tabs.  The tabs themselves will be switched to above the window, not below it as on Firefox, and there’ll be a privacy option similar to Internet Explorer’s recently announced InPrivate mode, in which no record of sites or searches will be stored.  A malware and phishing protection system will be integrated and constantly updated, with Chrome automatically downloading a list of dangerous sites in the background.

A special team in Denmark have been working on an updated JavaScript Virtual Machine, called V8, will also be an integral part of Chrome.  It promises to speed up JavaScript and reduce memory bloat, which will make a significant difference in webapps, together with highlighting any core offenders, whether webpages or plug-ins, that use up more memory than they should.  Chrome will allow webapps to create their own, address and toolbar free windows, better replicating traditional desktop apps and continuing Google’s attempts to blur the difference between what’s online and what’s local.

Intended for release as an open-source project, the Google Chrome browser has no specific release date attached to it. The project webpage is http://www.google.com/chrome but it’s not active at time of writing.  You can see Philipp Lenssen’s scans of the Chrome comic here.