It seems that Google isn’t quite done shaking things up yet. After Andy Rubin stepped down as Android’s head and Google Reader getting the ax, it’s reported that the company is breaking up its maps and commerce businesses, with the SVP of Geo and Commerce at Google, Jeff Huber stepping down to join the Google X team instead.

According to the Wall Street Journal, an unnamed source said that Google’s maps division will now be a part of Google’s search unit, while commerce will join the company’s advertising division. Huber will be stepping down for his current and will join Google X, the division that’s responsible for Google Glass and the company’s self-driving car technology. 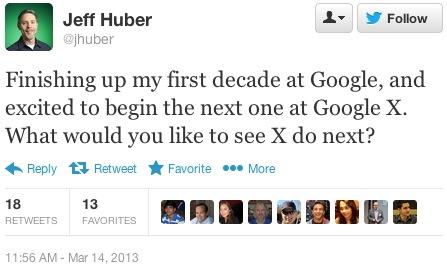 There are not a lot of details at the moment, but it’s said that the change was announced internally yesterday around the same time that it was announced that Andy Rubin would be leaving Android. Google has declined to comment on the situation, but if it turns out to be true, we should be seeing an official announcement sometime soon.

This report comes just days after long-time Android chief Andy Rubin stepped down from the division in order to take on a separate role. Android’s new chief will be Sundar Pichai, who is the current head of Chrome OS and the Chrome web browser, which means we could see a merging of the new platforms at some point.