Scientists at CERN have announced that they have discovered evidence of a Higgs-like particle with an evidence signal of 5 sigma, the agreed threshold for positive identification of the so-called “God Particle.” Announced at a live streaming press conference from the Large Hadron Collider, the confirmation means there is a 99.99997-percent chance that the Higgs boson has been identified in the 125GeV mass range. The news has huge implications for the so-called Standard Model of physics.

That model attempts to describe the ways the universe works at a subatomic level, including the electromagnetic, weak, and strong nuclear interactions. Suggestions that the Higgs boson – a “massive scalar elementary particle” – was a necessary part of that model were made back in the 1960s, but the huge amounts of energy required to actually identify the boson have kept it elusive.

“The Higgs boson plays a unique role in the Standard Model, by explaining why the other elementary particles, except the photon and gluon, are massive. In particular, the Higgs boson would explain why the photon has no mass, while the W and Z bosons are very heavy. Elementary particle masses, and the differences between electromagnetism (mediated by the photon) and the weak force (mediated by the W and Z bosons), are critical to many aspects of the structure of microscopic (and hence macroscopic) matter. In electroweak theory, the Higgs boson generates the masses of the leptons (electron, muon, and tau) and quarks” Wikipedia

Those huge energies have been what the CERN teams have been flinging around in the large hadron collider, with two teams, ATLAS and CMS, looking for evidence that indicates the Higgs boson is present in the aftermath of high-power collisions in the underground facility. 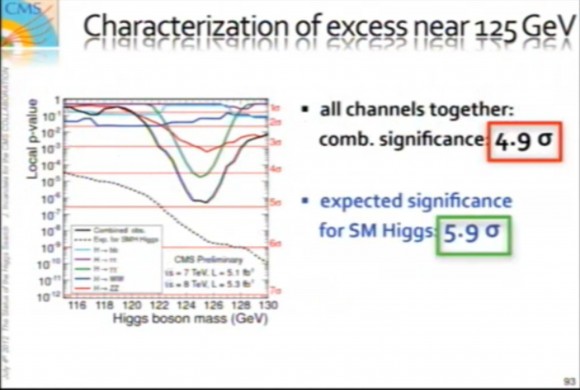 CERN says it has observed some of the key indicators that have indeed confirmed that to such a high degree of possibility, including state decaying to di-photon level with a significance of five sigma, and leaving them confident the Higgs is there.

“The results are preliminary but the 5 sigma signal at around 125 GeV we’re seeing is dramatic. This is indeed a new particle. We know it must be a boson and it’s the heaviest boson ever found,” said CMS experiment spokesperson Joe Incandela. “The implications are very significant and it is precisely for this reason that we must be extremely diligent in all of our studies and cross-checks.”

The search is not over, however; “it’s very early” the team say, and more data is still needed to confirm the combined channel significance, which is currently coming in at 4.9 sigma but, according to predictions, should be around 5.9 sigma for the Higgs. While the ZZ + gamma-gamma combination hits the 5.0 sigma threshold, overall CERN is saying it has “observed a new boson with a mass of 125.3 +/1 0.6 GeV at 4.9 sigma significance.” 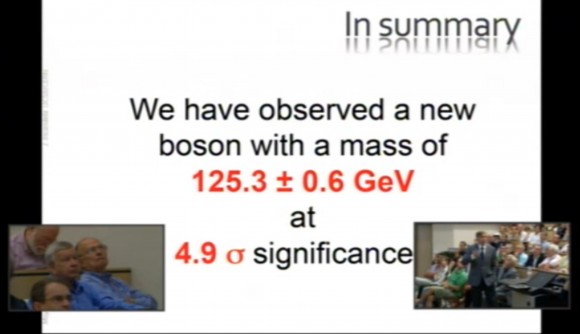 “We have reached a milestone in our understanding of nature,” said CERN Director General Rolf Heuer. “The discovery of a particle consistent with the Higgs boson opens the way to more detailed studies, requiring larger statistics, which will pin down the new particle’s properties, and is likely to shed light on other mysteries of our universe.”