GM has revealed its new self-driving car, the Cruise AV, which the automaker says is the first production-ready autonomous vehicle. The fourth generation of GM‘s Cruise AV driverless car, it’s even more of a departure from what you’ll currently find on the automaker’s dealership forecourts. That’s because it has no steering wheel and no pedals: indeed, no manual driving controls whatsoever.

In an image of the dashboard – and the video below – you can see the somewhat unsettling result. The Cruise AV is based on the Chevrolet Bolt EV electric car, but the dash looks like it has been mirrored in photoshop. Gone is the wheel, the digital instrumentation panel, and the pedals; there’s no shifter or stalks for turn-signals.

Instead, most features are controlled by a touchscreen in the center of the dashboard. That’s where occupants will be able to interact with the autonomous systems, from the car advising people its passengers to buckle up, through to showing them the route they’re going to take. It’ll also offer a way to contact a remote support enter, should there be a question or an emergency.

GM says that, come the deployment of the Cruise AV, it’ll be offered on a ride-sharing basis. You’ll be able to book the car with an app, and it will drive itself over to you. In the meantime, all of your preferred climate control and multimedia settings will have been synchronized, so that the car is more welcoming when you get inside. 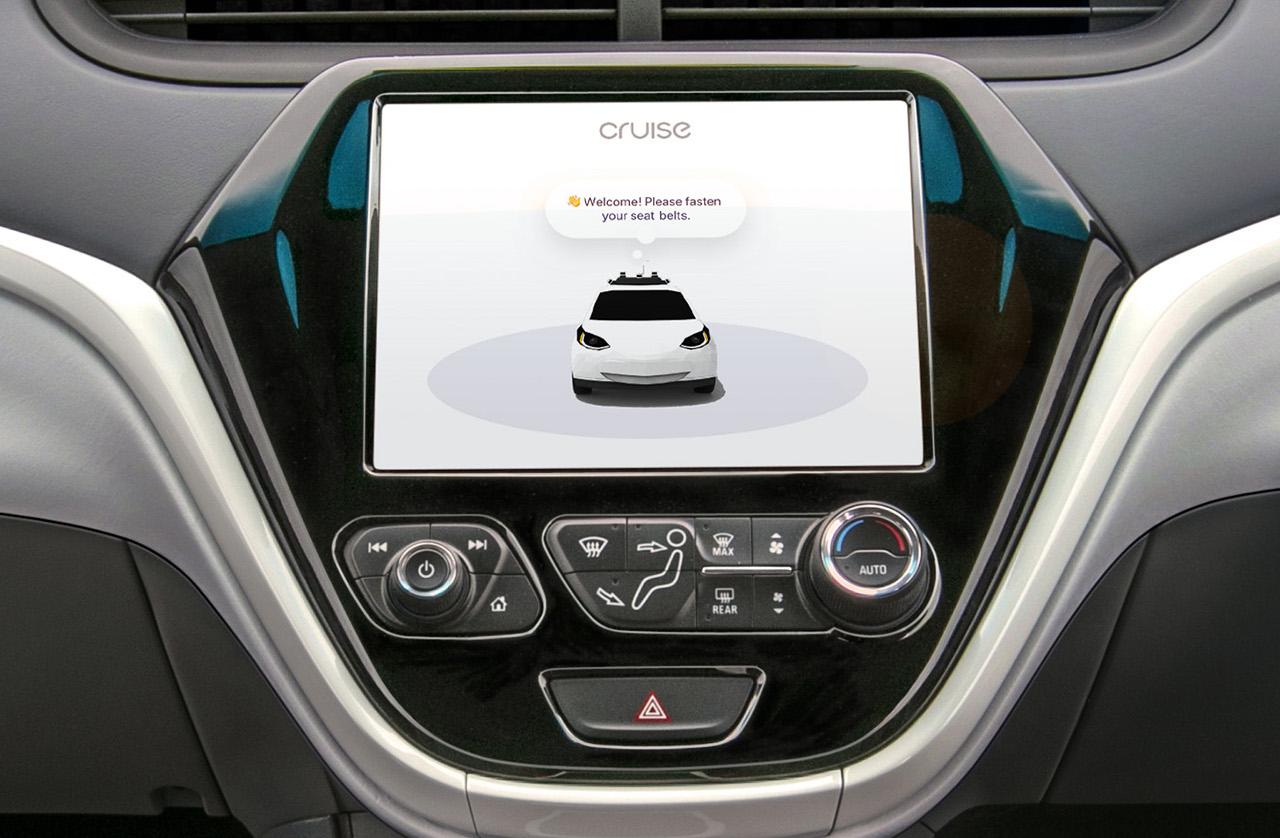 Should you forget something and leave it behind in the vehicle, GM’s team will be able to contact whoever is currently inside through the touchscreen system. The Cruise AV is even able to close its own doors, should passengers leaving the vehicle not shut them properly.

General Motors says the roll-out of its service will be a gradual one. That “operational design domain” or “ODD” will be limited to certain cities where they have high-resolution mapping, have a full knowledge of local driving regulations, and understand and have prepared the driverless systems for weather conditions and other situations. They’ll also be attuned to other road users: even if the car’s sensors make it smart enough to drive at regular speed in fog, it’ll slow down to match human drivers in the same conditions.

Without a steering wheel and other controls to take over in the case of an emergency, of course, GM has baked in other safety systems. There’s a redundancy computer, which can act as a backup should the primary driverless brain encounter an issue, and each has its own diagnostics system. Key elements of the steering and braking, among other mechanical areas, have separate and redundant controllers and actuators. In the case of a malfunction, the Cruise AV can automatically slow itself and pull over to the side of the road, contacting GM’s support team as it does so.

Of course, the current regulations aren’t quite at the same point that driverless car technology is. General Motors says it has filed a petition with the Department of Transportation (DOT) for permission to deploy the Cruise AV in 2019.