If you work at an office that either has other offices elsewhere or lets employees work form home, you know how crucial teleconferencing can be. It’s also handy for those businesses that have clients or customers spread out across the country or world. It seems Google knows, too, and is readying some sort of teleconferencing tool tentatively named GMeet; likely short for ‘Google Meeting’. Details are sparse, but it might serve as an offshoot of Hangouts, Google’s existing over-the-top communications platform.

Currently, the tool only accepts sign-ins from Googlers. This likely means the service is being ‘dogfooded’, Google’s tagline for internal testing of services. Aside from an app, there’s also a Chrome extension, which could hint at this being used in Google’s enterprise Chromebox setup. 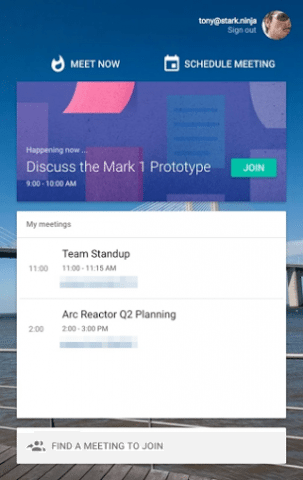 Currently, not much is known about the service. We don’t get a look inside, but it seems pretty straightforward. Log-in, and you’re in a meeting. It’s probably voice and video, making it directly competitive with GoToMeeting — and even sniping some of Hangouts’ energy.

It could be an app meant for internal use at Google. GMeet may also be a way for Google to leverage teleconferencing without the need for a Google sign-in, which many corporate employees just won’t use for business purposes.

With Google I/O nearing, it’ll be interesting to see if we hear more about GMeet. For now, it’s an interesting find, but could lead nowhere fast.