GM has revealed its new, hands-free driving system, Ultra Cruise, promising more than 2 million miles of coverage in the US and Canada. The system, which builds on GM Super Cruise, will “ultimately” work in 95-percent of all driving scenarios, the automaker says, and be usable on every paved road in North America.

That will mean more than 3.4 million miles, GM says, encompassing a variety of road types. “Customers will be able to travel truly hands free with Ultra Cruise across nearly every road including city streets, subdivision streets and paved rural roads,” the automaker adds, “in addition to highways.”

The result will be door-to-door hands-free driving, at least so the promise goes. It’s based on the recently-announced Ultifi software platform, built atop the VIP (Vehicle Intelligence Platform) architecture which GM has been using in recent models such as the latest Escalade and the upcoming GMC Hummer EV and Cadillac Lyriq.

On the sensing side, there’ll be 360-degree perception around the vehicle through a mixture of sensors. That’ll include cameras, radars, and LIDAR, with an integrated LIDAR behind the windshield. They’ll create a “360-degree, three-dimensional statistical representations of the environment surrounding vehicles with redundancies in critical areas,” GM explains.

The current system, Super Cruise, works on divided highways that GM has pre-mapped. In its most recent, “enhanced” form, GM added automatic lane changing functionality, which allows the car to switch lanes in order to maintain the set speed.

Super Cruise will continue to be offered, co-existing alongside Ultra Cruise. The former will be available on mainstream vehicles, while Ultra Cruise will be reserved for more expensive models. It’ll debut first on Cadillac.

Where Super Cruise automatically shuts off when you leave the highway, however, Ultra Cruise will keep on working. It’ll be able to react to permanent traffic control devices, track and adjust to speed limits, handle automatic and on-demand lane change, left and right-hand turns, close object avoidance, and even park in residential driveways.

There’ll be a new display that GM has developed for the HMI, dubbed the Ultra Cruise Dynamic Display. Described as “a freeform display directly in the driver’s line of sight,” it’ll also combine the attention monitoring system that ensures the driver is paying attention to the road even if their hands aren’t on the wheel. 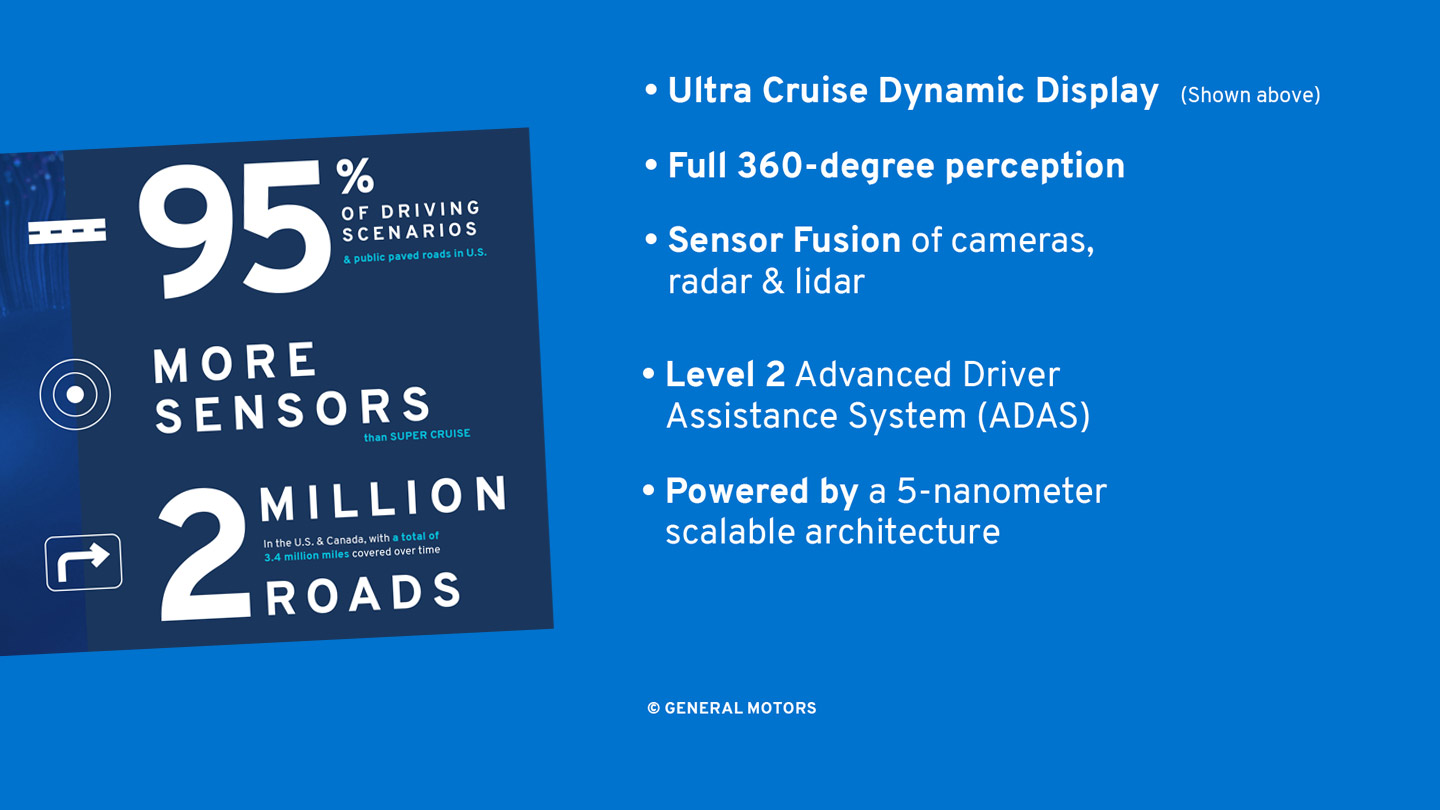 A new Ultra Cruise app, meanwhile, will be accessible in the vehicle’s central touchscreen when it’s parked. That’ll include more information on what Ultra Cruise can do, the driver’s responsibilities, and data on past trips. Diagnostic systems will automatically spot areas where Ultra Cruise could improve, meanwhile, triggering video recording of the situation and then pushing it back to GM’s systems so that the tech can be refined.

Tesla, of course, has its own Autopilot system, which has been available on cars like the Model S and Model 3 for some years now. It can be used on most roads – with varying results – and already supports features like automatic lane changes. However, it’s officially a Level 2 hands-on system, meaning drivers are meant to keep their hands on the wheel while it’s operational.

Tesla’s “Full Self-Driving Beta” has been progressively rolling out, billed by the automaker as a further step to actual Level 4 functionality. That said, it still requires driver supervision, which means it’s still a Level 2 system officially – and as Tesla describes it to regulators. There are no truly autonomous vehicles on sale at the moment, and it’s uncertain when that will actually change given the state of technology and the regulatory environment.

The first vehicle to offer Ultra Cruise will arrive in 2023, GM says, beginning with Cadillac. The specific model hasn’t been confirmed yet, and it’s unclear how much the option will cost at that point.