It’s time to pick up the landline and dial the Ghostbusters – the ECTO-1 LEGO set has arrived at SlashGear. This magnificent set comes from the same place several of the most web-popular LEGO sets from the past few years have come: LEGO Ideas. Here we’ve got all four of the team present as well: Venkman, Ray, Egon, and Winston.

The faithfulness to the original vehicle and characters with this set is top-notch. What you’ll roll with here is the original and most notable reconstruction of a 1959 Cadillac Miller-Meteor ambulance conversion vehicle, fully stocked with the latest in ghost-detecting and ghost-capturing machinery. Right down to the tail fins. 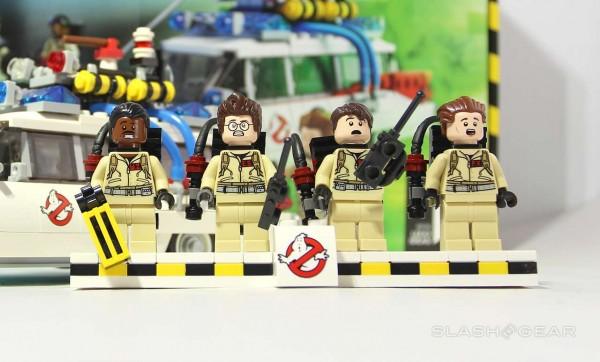 Proton Packs, a Ghost Catcher, and your very own squad of Ghostbusters minifigures. It all pales in comparison to the license plates. These plates are made with a custom yellow/orange, made to match the plates used in the films – and throughout NYC from 1973 to 1986. Classic! 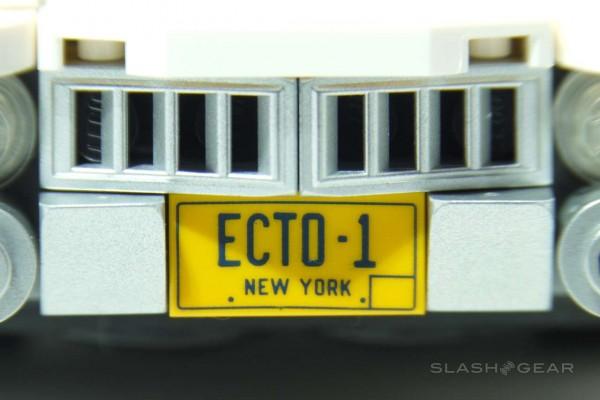 This isn’t the first time custom license plates have captured our LEGO-loving imagination. Check our LEGO Back to the Future Review from earlier this year – OUTTATIME may have met its match! 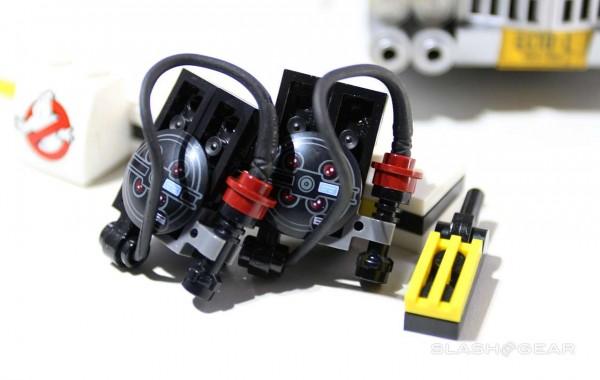 Above you’ll see the Proton Packs – the single machinery block will be your hardest brick to find if you plan on building these on your own. From there it’s just a whip and a few black blocks to complete. They all hang on the backs of the Ghostbusters with the same block as Emmet has in sets for The LEGO Movie.

Below is a close-up on the Ghost Catcher. Find yourself a few yellow grates and you’ll be kicking these constructs out with ease – 3 pieces each! 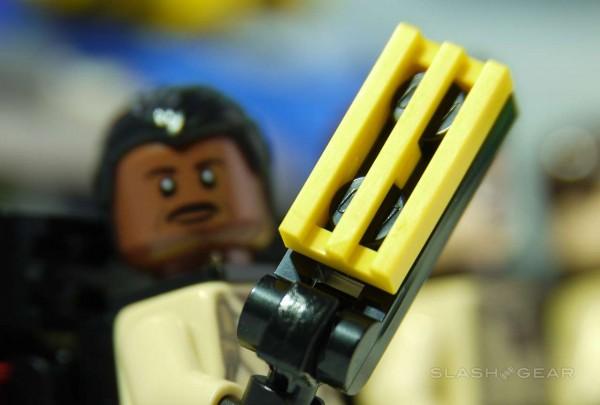 My only complaint with this set is in the space allowed inside the vehicle. While it’s amazing that three out of four of the minifigs fit at once, there’s always room for improvement. 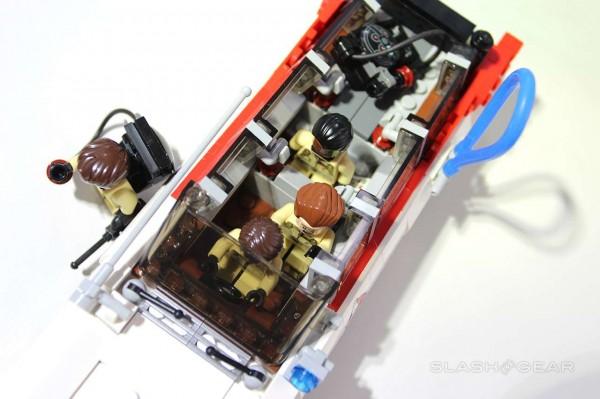 Above you’ll see three out of four of our Ghostbusters minifigures resting comfortably inside the ECTO-1 with their Proton Packs off. Below you’ll see the vehicle with its top off (easily removable, by the way – nice touch). 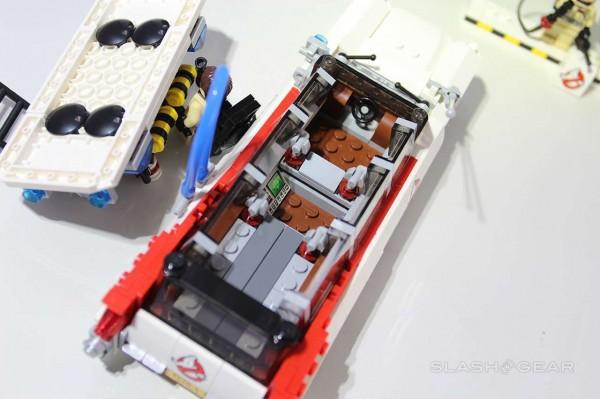 On the other hand, this set will probably have a home on more display shelves than it will in the collections of tiny children, so playability isn’t such a large factor here as it is in more common sets. And it certainly rolls well aesthetically. 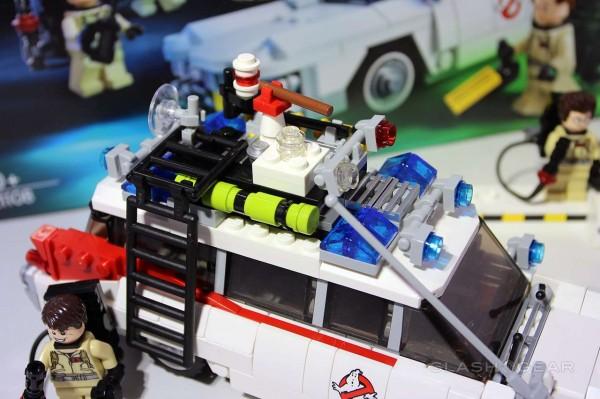 The top of the vehicle is held by very few bricks – just enough to keep it attached whilst driving. Allowing access to the interior of the vehicle shows the modern play-friendly finesse of LEGO builders – not something we’ve always seen in sets in the past.

In other words – LEGO sets are only getting better as time passes by. Even though LEGO has been around for decades, the newest sets continue to be more excellent than the old in build quality, color, and delivery. 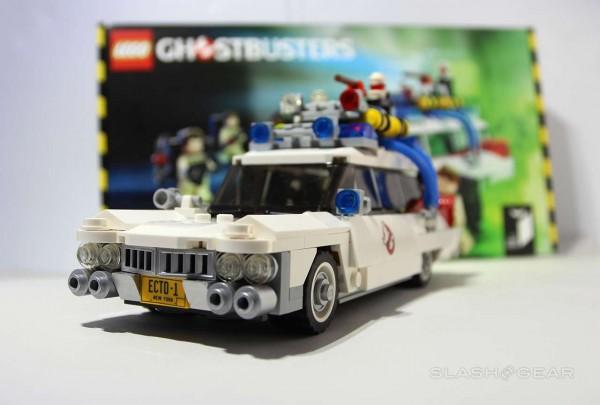 Unique details make the set, and here devoid of stickers – all printed – we’ve got some especially find unique bricks. 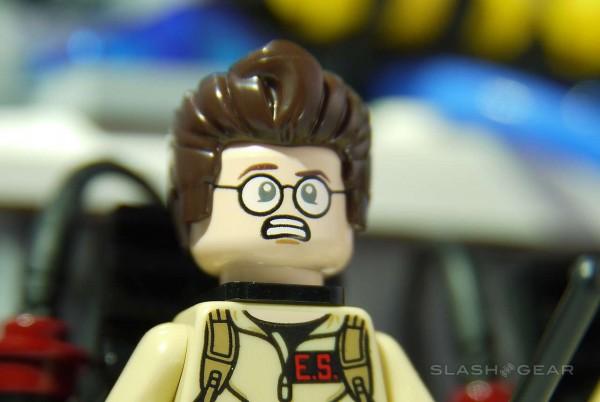 While you’ll probably have the Proton Packs attached most of the time, details on the back of the Ghostbusters’ jackets are just as fine as the front. 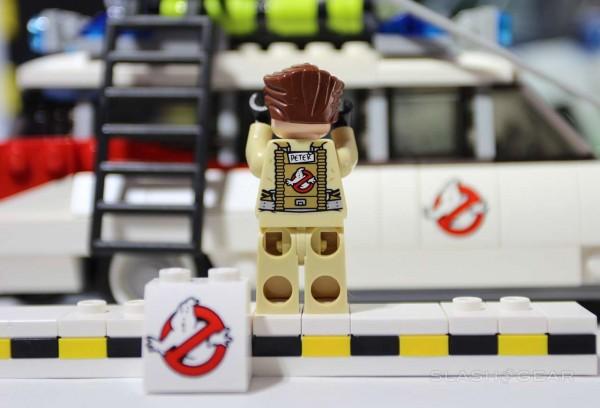 This set will cost you right around $49.99 USD, and it’s well worth the cash. If only for the Ghostbusters logo printed blocks and the first official Proton Pack. Like all LEGO sets, this set will be in stores for a limited time, and given the fact that it took 30 years to become a LEGO set in the first place, don’t expect the ECTO-1 to be re-released in any new editions any time soon.