We already knew Genesis could make some darn fine looking automobiles, but Hyundai’s luxury arm may have outdone itself with the new Genesis X Concept coupe. Unveiled today, the vision of a future GT coupe takes the design cues we’ve seen Genesis apply to excellent effect on vehicles like the G80 and GV80, then cranks them up even further for a lavish two-door.

It means a particularly exaggerated interpretation of the so-called “Two Lines” theme which we’ve seen the automaker use on production models. For the Genesis X, that means glowing strakes that pull through the headlamps, across the front fenders, and stretch beyond the wheel arches all the way to the doors of the car.

The grille still keeps the hero-shield shape that’s now familiar, but with softened edges and a more sporting size. Double-layered bumpers have been used, too, and the Crest Grille is filled with a G-Matrix pattern mesh. It’s an opportunity for Genesis to show off its attention to detail, too: the internal pattern of the grille has been painted in the same Lençóis Blue color as the car’s body. That hue, the automaker says, was inspired by the lagoons of Maranhenses National Park in Brazil. 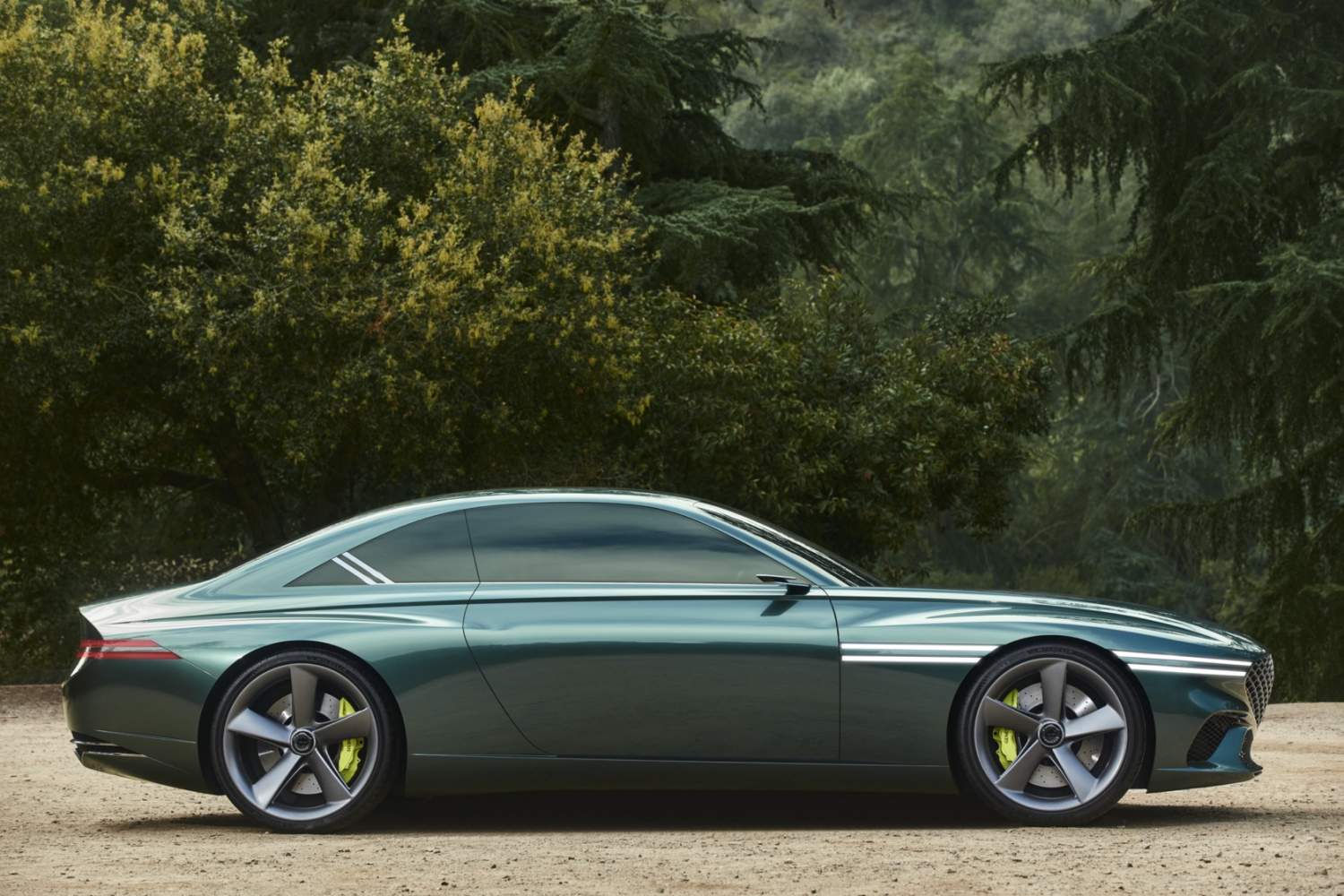 Along the side, there’s some seriously lengthy dash-to-axle, with the Genesis X Concept getting a hefty hood and a short trunk. Muscular fenders and a sweeping Parabolic Line are more opportunities for Genesis’ favorite design elements, while the digital side mirrors get more Two Lines styling. 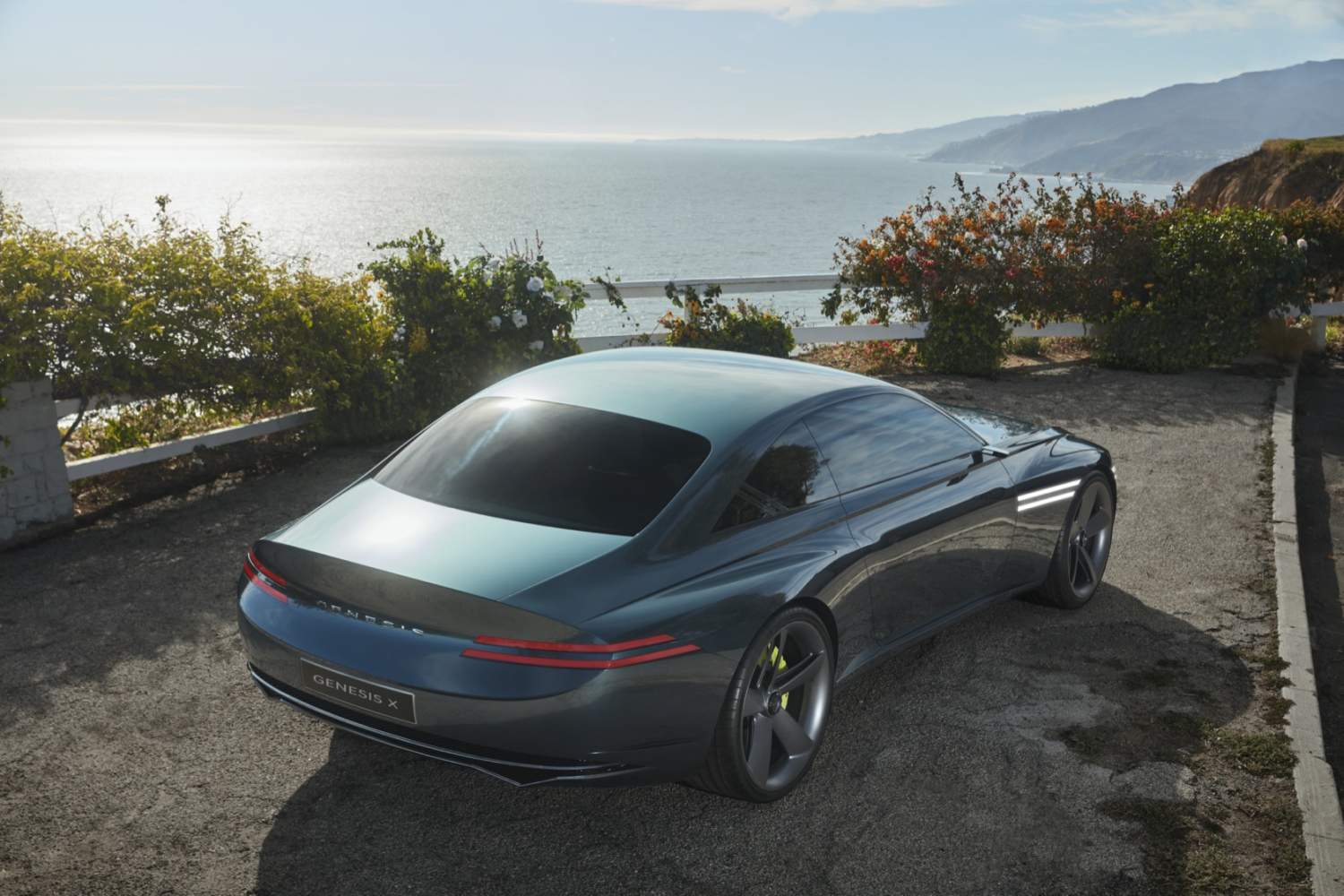 Since this is an EV, there’s a slide-to-open charging door with illuminated port inside. The wheels are turbine-type alloys, hiding lime-accented brake calipers. Finally, at the rear there are two-lined taillamps to chime with the front, along with an oversized fender and sleekly arching trunk lid. 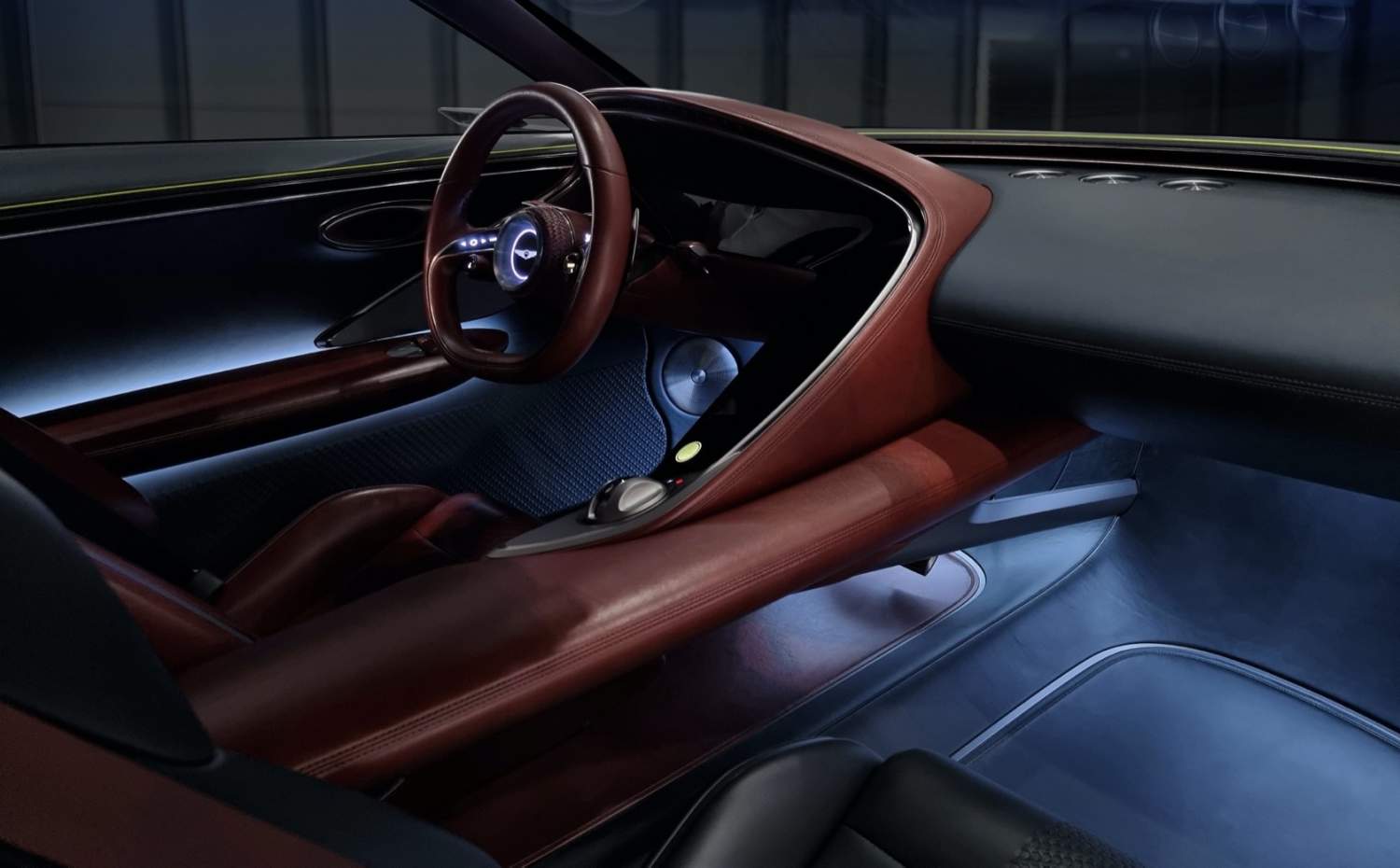 Inside, Genesis’ recent themes of “Beauty of White Space” pares back the detailing. The driver is surrounded by a cockpit of displays and controls, with a scotch brown bucket seat; the passenger’s seat is finished in ocean wave green blue as a contrast. Both get four-point seat belts, while slim air vents provide another echo of the Two Lines theme. 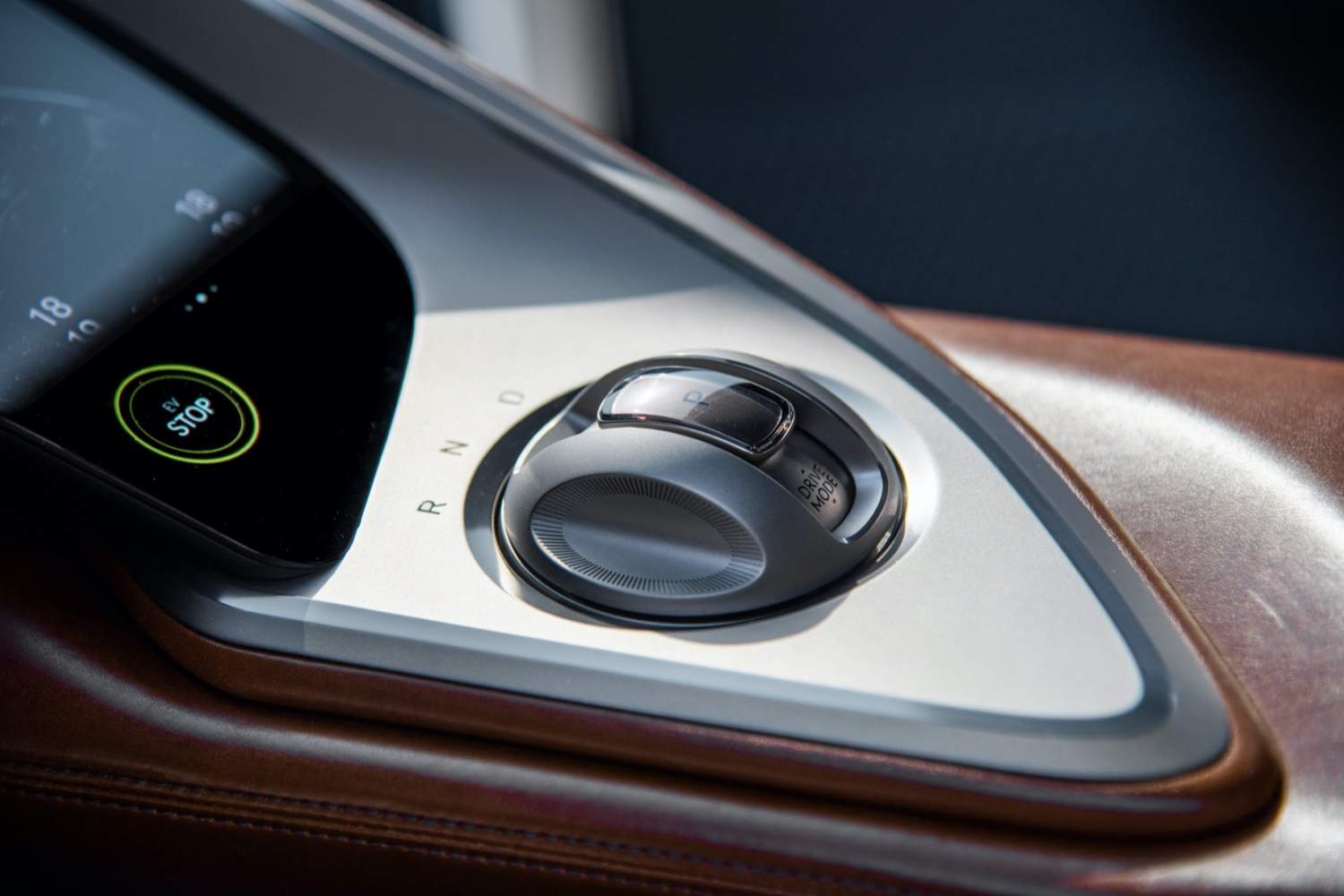 A Crystal Sphere Electronic Shift Lever also handles drive modes, while up cycled weave-patterned leather for the seat belts, wheel, and airbag cover are made from leftover pieces of hide. 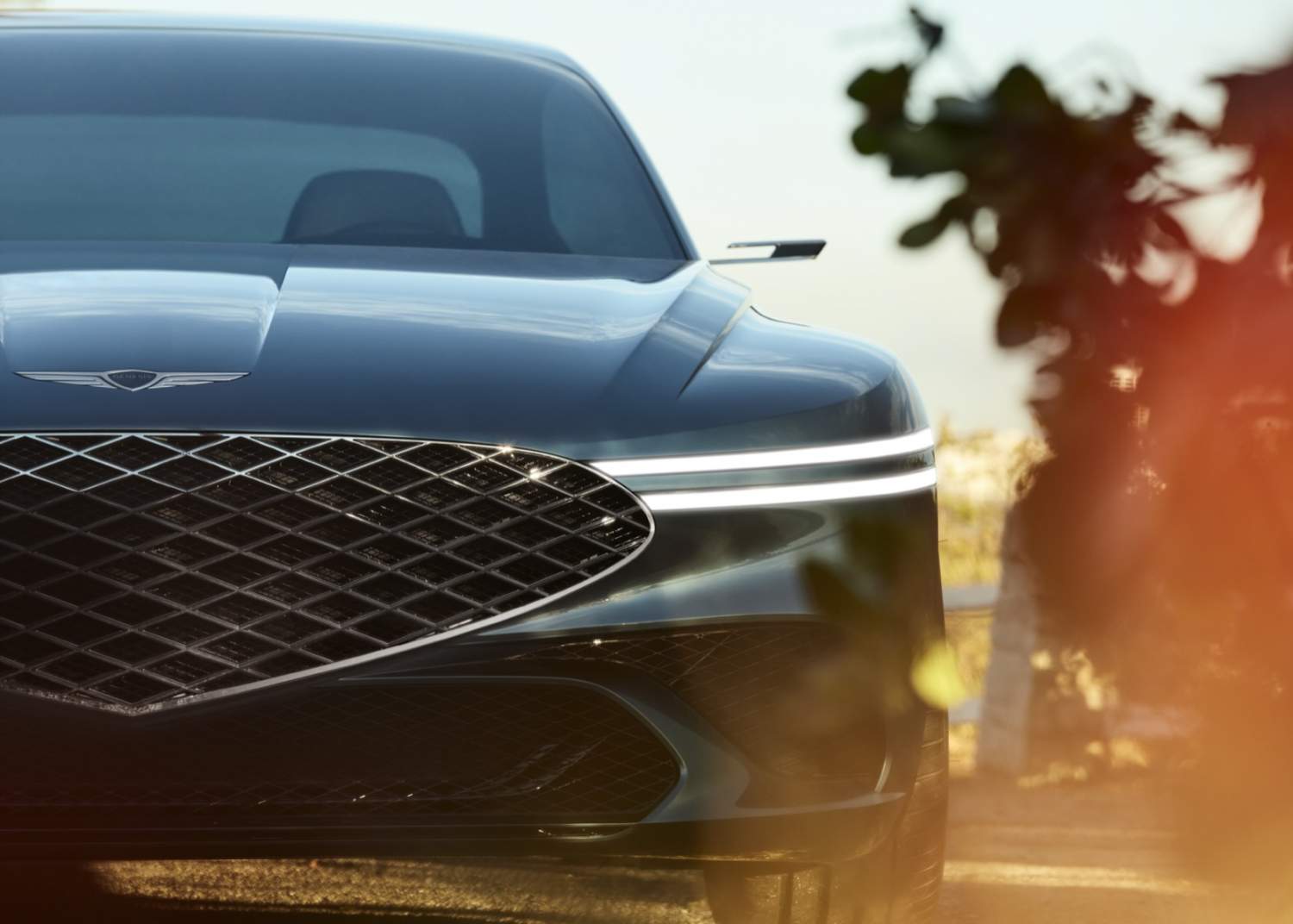 While Genesis may not have a production version of the Genesis X Concept in mind, at least right now, don’t fret. Elements of the styling are expected to show up in the all-new Genesis G90, the automaker’s luxury sedan, which is preparing to cast off whatever old-school elements remain and embrace an aesthetic that’s altogether more avant-garde. Check out plenty more images of the Genesis X Concept in the gallery below.