Gateway has updated its all-in-one PC range, adding the distinctively designed Gateway One ZX4951 and One ZX6951 models that will sit alongside the company’s existing premium machines.  Sized at 21.5- and 23-inches respectively, the ZX4951 and ZX6951 both support Full HD, have touchscreen displays and are VESA mountable.

Processors from Intel’s Pentium and Core i3 ranges are on offer, along with optional Blu-ray, and the ZX6951 also gets an integrated TV tuner for HTPC duties.  RAM is 4G – 16GB is max – and storage is either 500GB or 640GB.  There’s also 5.1-channel sound, a webcam and integrated wireless.

Gateway are preloading their Touch Gadgets package on top of Windows 7, which apparently makes for easier access of the web, social media, music playlists, photos and videos, though we’ll have to wait for our review unit to drop to see if that’s really the case.  Both the new Gateway One AIOs are available today, priced between $899.99 and $999.99 depending on configuration. 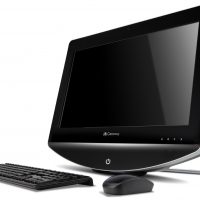 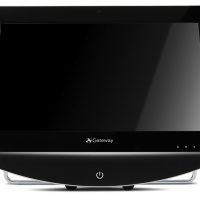 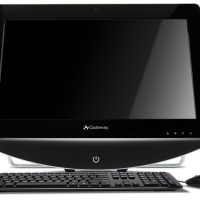 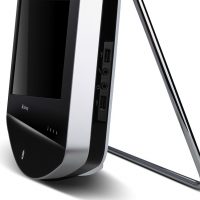 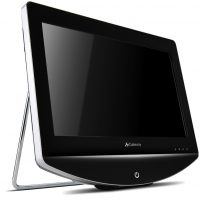 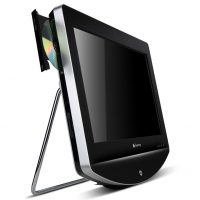 With MSRPs beginning at $899.99, the Gateway One ZX4951 Series and One ZX6951 Series feature 21.5- or 23-inch full high definition displays, powerful Intel® Pentium® or Core™ i3 processors and Blu-ray drives. Their compact size makes them perfect for small rooms, such as a dorm, home office or kitchen. In addition, the ZX6951 includes a TV tuner, so it can easily double as a TV and/or home entertainment center.

“The demand for all-in-one desktop PCs took off last year with the introduction of Windows 7 and its touch screen capabilities, and as the technology became more powerful and less expensive,” said Steve Smith, senior business manager of consumer desktops, Acer America. “The newest additions to our ZX One Series of PCs expand the choices available, making these highly stylized PCs more accessible to a wider range of customers.”

Unlike most “square” all-in-one PCs on the market today, the new Gateway ZX One Series features a unique curved bottom edge, adding some flair to the traditional box-shaped PC design. A glossy black bezel and chrome and silver accents keep it modern and elegant. Lighting along the bottom edge of the PC can be set to four different brightness levels, adding ambiance to the room and lighting up the wireless keyboard.

A chrome backstand can be adjusted for different heights and viewing positions, while a back door covers the various ports and cables keeping the back of the PC clean and steamlined.

The new Gateway One ZX4951 and ZX6951 models can easily function as a TV and/or home entertainment center, making them ideal for small rooms, such as a dorm or home office. VESA mountable, this design can be attached to a kitchen wall, freeing up limited counter space.

The new models also include Gateway Touch Gadgets, a fun and useful way to use the PC’s touch screen technology to interact easily with the Internet, social media, music playlists, photos, videos and more.

Availability and Pricing
Both models are available today at leading retailers nationwide. MSRPs range from $899.99 to $999.99, depending on configuration.

Topics All in oneComputingGatewayPCtouchscreen
Must Read Bits & Bytes