Samsung has revealed its latest Android tablet, the Samsung Galaxy Tab 3, slimming down from its 7-inch predecessor and offering WiFi-only and WiFi + 3G variants. The new slate, running Android 4.1 Jelly Bean on a 1.2GHz dualcore processor, trims the bezels of its 1024 x 600 LCD TFT display so as to come in at a trimmer 111.1 x 188 x 9.9mm, while still accommodating a 4,000 mAh battery.

The WiFi-only version will arrive in May with a global launch planned, and tips the scales at 302g. That will be followed by the slightly heavier – 306g – 3G model, which will have quadband HSPA+ support (850/900/1900/2100) and is due in June; Samsung is yet to confirm exactly where the 3G model will and won’t be sold.

Both tablets get a 3-megapixel rear camera and a 1.3-megapixel front-facing camera, as well as WiFi a/b/g/n (2.4/5GHz) with channel-bonding and WiFi Direct support. There’s also Bluetooth 3.0, A-GPS, GLONASS, and a microSD card slot to add up to 64GB to the 8GB or 16GB of internal storage. 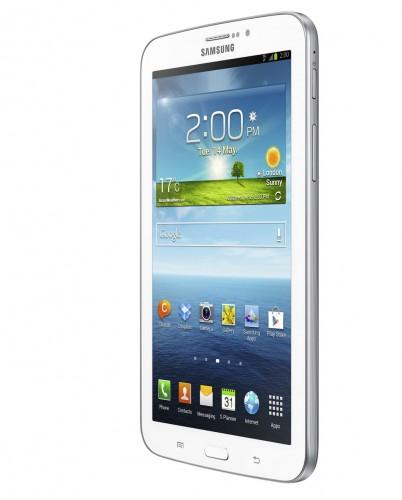 RAM is 1GB, while sensors include an accelerometer, digital compass, and light; the 3G version also has a proximity sensor, which we’re presuming will turn the screen off as you hold it to your face. That would imply voice calls, assuming your social life can withstand the horror of holding a 7-inch tablet up like a phone.

Samsung is yet to confirm pricing for either version of the Galaxy Tab 3.