At first blush, the Galaxy S6 edge is a hot, new phone with a curved screen and exciting new non-plastic shell. Dip under the hood, and it seems not much is new. The crew at iFixit has torn the S6 edge apart for us, and provided a good look at what makes the curved display phone tick. It seems the slapped-together Samsung smartphone days are coming to a close, instead giving way to a more tightly wound package of parts.

The S6 edge, though it’s curved and cute, is still just a smartphone. The motherboard slides around the battery, which is a 2600mAh version; still good, but not huge. When you get past the ho-hum specs, the S6 edge starts to frustrate.

Antennas are welded to the metal mid-frame, which Samsung claims provide stability and improve space inside. Samsung also included microUSB 2.0 rather than the faster 3.0 for some reason. 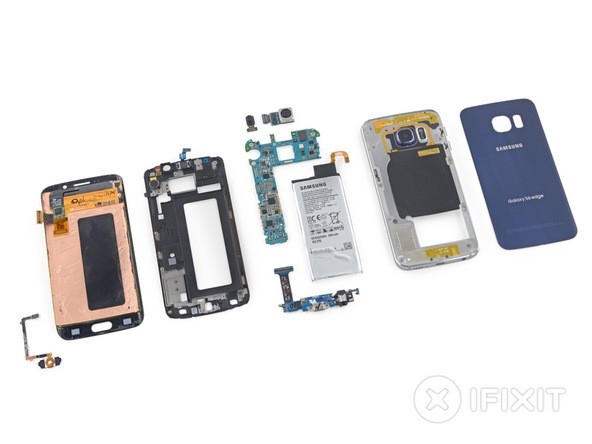 The main concern is battery and display, though. Two of the more ‘normal’ repairs are not so easy with the S6 edge, as the battery is adhered to the rear of the display assembly, which is also buried under the mid-frame. You also need to snap the motherboard out to replace the battery, something we saw in the HTC One M9 teardown.

Cracked screens will also be a problem. As iFixit says, “replacing the glass without destroying the display is going to be very difficult.”

Overall, the Galaxy S6 edge gets a 3 out of 10 for repairability. That’s slightly better than the HTC One M9’s score of 2/10, but still — the average tinkerer will probably want to keep away.