Your next iPhone could whimper like a tired puppy when its battery is close to empty, or get frantic when connected to 4G networks, if one of Apple’s latest patent applications has its way. “Adjustable voice output based on device status” promises to adjust the voice output of various device status reports according to other factors, like sounding “more or less tired based on the battery level.” It’s not the only Apple patent app suggesting non-traditional communication, either; “Input devices and methods of operation” may be a dull title, but the application describes a new type of tactile feedback that could see buttons breathing on your fingers to guide them into place.

In the voice patent, Apple suggests that various button clicks or gestures could trigger different status reports. So, a double-press might get you battery status – voiced enthusiastically if you’re near-full, or sounding tired if there’s little charge left – while holding down the button could give you a read out of all the various statuses of the device. 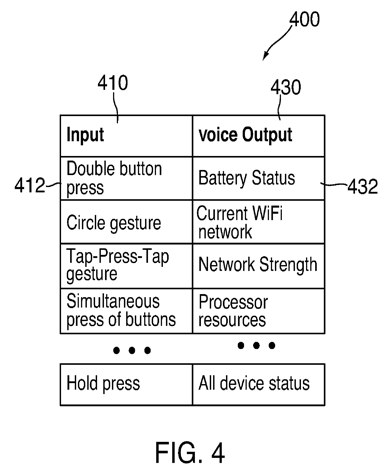 As for the tactile feedback, that would use various pressure sensors and pneumatics to offer force-feedback both when you’re actually touching the controls and when your finger is nearby them. It could also make certain keys harder or easier to press, or work in the reverse and adjust input according to how firmly you push the button. Apple reckons this system would be a good workaround in increasingly compact devices with minimal – or, for touch-based gadgets, non-existent – travel in their controls.

Of course, there’s no telling that either idea will make it to final products, but we can definitely see the voice output concept being integrated into VoiceOver, the system that reads out artist, track and playlist information on the iPod shuffle and nano.