When Fujitsu-Siemens announced they’d be making a netbook, many ears pricked up. The company has a long history of ultraportable devices, and still makes one of the more appealing UMPCs; many hoped some of that innovation would follow through to the Amilo Mini Ui 3520. One landed on the SlashGear test bench recently, and we thought it only fair to put it through its paces.

Back when the first in-the-wild shots of the Amilo Mini emerged, we admired its Stormtrooper-esque design and compact size. In the plastic, it has a semi-gloss finish that does a reasonable job of avoiding fingerprint smudges, plus you can replace the lid cover for alternative colors. Fujitsu-Siemens pre-fit the white and include a burgundy red cover (and will sell you additional options) but we can’t seem most people swapping even semi-frequently, if at all.

Ports include two USB 2.0 sockets, audio in/out, VGA, a multiformat card-reader, ethernet and a 34mm ExpressCard slot. The latter may find favor with mobile users toting ExpressCard 3G modems, but the specs of the Amilo Mini undermine anything more serious such as high-quality sound cards or TV tuners. More disappointing is the keyboard and trackpad, neither of which is especially appealing. The trackpad is an okay size, if a little small, but the buttons not only flank it but have angled cut-outs at the bottom, presumably for stylistic reasons. In reality, though, it simply makes them harder to press. 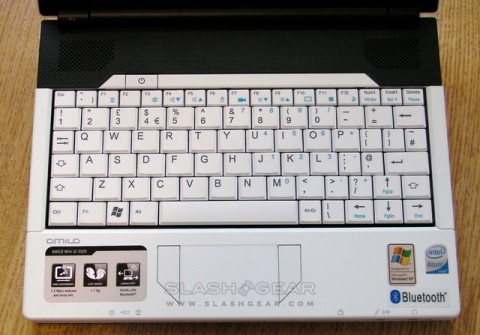 As for the keyboard, that’s cramped and shows surprising quantities of flex. Considering this is an 8.9-inch netbook, the ‘board is more the size you might find on an original 7-inch Eee PC. It feels cheap, and that’s at odds with the rest of the chassis which is of reasonable quality. Above it, the screen has a sizable bezel, which has the end result of making the panel itself look smaller. Still, it’s relatively clear and bright, and lacks the gloss finish that many find frustrating. It runs at 1024 x 600 resolution.

Inside, there’s the usual Intel Atom N270 1.6GHz processor, paired with 1GB of DDR2 RAM and a rather paltry 60GB PATA hard-drive. An 80GB drive is an option, but still only half the size of what’s available as standard on rival machines. Graphics are courtesy of Intel’s GMA 950M chipset, and the OS is Windows XP Home. Both WiFi b/g and Bluetooth are standard fit.

Performance from the Atom processor is never going to be something to write home about, but Fujitsu also allow you to underclock it some more. They call this “Silent Mode”, and it basically limits CPU and GPU speed so as to reduce the need for a noisy fan; in reality, we noticed little difference between the two either in performance or sound. Memory and CPU benchmarks proved roughly on a par with other N270/1GB machines, but the Amilo Mini’s PATA hard-drive let it down compared to SATA or SSD based rivals. Still, you’re unlikely to be asking too much performance from the netbook, and the payoff is a slightly cheaper sticker-price. 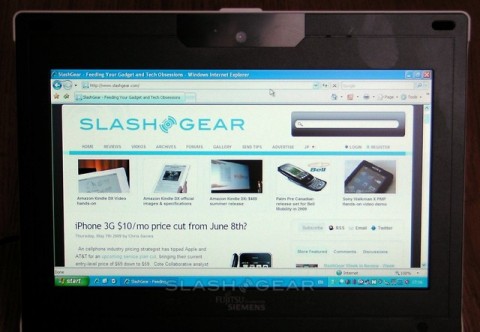 Battery life from the 2,200mAh Li-Ion pack was roughly three hours of video playback with the screen brightness at half; turning off the WiFi/Bluetooth extended that, and the display remains usable even notched down close to its minimum backlight. Alternatively, ramp it all the way up and ask some heavy crunching of the N270 and you’ll drain it after just a couple of hours.

The Fujitsu Amilo Mini Ui 3520 is certainly distinctive in its looks, and it’s reasonably compact and sturdy, but the tricky touchpad buttons and dire keyboard undermine its abilities. Standard Bluetooth and the ExpressCard slot will have appeal for some users, and the relatively small hard-drive may not, considering most usage scenarios for netbooks, actually be too much of an impediment, but there are other machines we’d reach for before the Fujitsu. The upside is, of course, the price: right now, you can pick up the Ui 3520 from around £245 ($398) online, though that’s still more expensive than the older (but similarly specified) 8.9-inch Acer Aspire One. If it were our money, we’d go for the Acer.