Fujifilm‘s great gush of digital cameras this morning missed out one gem, the Fujifilm X-Pro 1, an interchangeable lens camera building on the successful X100. Packing a custom 16-megapixel APS-CMOS sensor, according to a prematurely posted press release, along with a new filter array and proprietary EXR processor, the X-Pro 1 will initially be offered with a choice of three Fujinon prime lenses.

French magazine Responsesphoto gives us a glimpse of what exactly the Fujifilm X-Pro 1 looks like, too, thanks to its February issue. It shows an external autofocus sensor and a metal chassis, as well as spilling pricing details: apparently €1,300 ($1,667) for the X-Pro 1 and the 35mm lens, while the other two lenses will sell at €600 ($770) apiece.

According to the press release, the Fujifilm X-Pro 1 is due to be officially revealed on Tuesday next week, right in the heart of CES 2012. 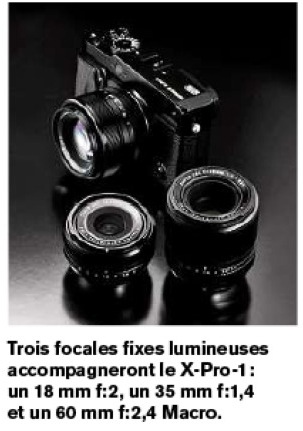 [via MirrorlessRumors and via The Verge]