From Click to Touch – iPad & the Era of Touch Computing

It’s been interesting to hear all the negative press and comments from the media about the iPad. Many people have been looking at the iPad and saying “What’s the big deal? It’s just a big iPod touch.” Others have gone so far as to criticize Apple and Steve Jobs directly, expressing their high expectations of innovation and then reveling in their disappointment at the lack of innovation they see in the iPad. What is clearly missed by the critics in industry and media is that the iPad represents much more of a vision of the future than people realize. The iPad ushers us into the era of Touch Computing.

I was fortunate enough to be at the unveiling of the Palm Pilot by Jeff Hawkins in 1996. I recall getting a sense of real innovation from that product, a sense that computing was entering a new era. I have also had the privilege of being at every major Apple product release, from the first iPod, to the iPhone, and now the iPad. As revolutionary as the iPod and the iPhone were, I didn’t have the feeling like I did with the Palm Pilot release. However, with the iPad event and the time I have had with the product so far, it is clear to me that we are entering a new era of computing.

Many people have spoken dismissively of the industry’s attempt to succeed with tablets before. Namely pointing out the failure of Tablet PCs. What is missed in this attempt to liken what happened then with what is happening now is that I would define Tablet PCs and the industry’s attempt to develop that market as pen computing. If you recall, many of these products required a pen or stylus to fully operate. The software was not designed for a pure touch-centric interface. I cut my teeth on Pocket PC when I worked in IT at Cypress Semiconductor exploring mobility in the enterprise. I also used many of the pen computing tablet products in my early days at Creative Strategies. The stark and fundamental difference with the iPad from so many tablets before is the integration of hardware and software all designed with touch computing in mind.

One of the primary reasons, I believe, that the iPad is not running OS X is because OS X is not yet – and may never be – a touch computing platform. Apple has taken their core touch interface in the iPhone and extended and changed it in some fundamental ways for the iPad. However, it is the applications on the iPad which best exemplify this new touch computing era we are entering into.

Even though some of the first applications on the iPad are barely scratching the surface of touch computing, other applications demonstrate how different and effective touch and multi-touch are when doing core computing tasks that have typically been reserved for a mouse and a keyboard. Many of the iWork apps for iPad, for example, demonstrate how natural computing tasks can be even while doing something productive like creating a presentation or adding creative elements to a document or a spreadsheet. Things that would have taken multiple operations to do with a mouse or keyboard are made so simple and intuitive when one or two or more fingers are involved.

This is showcased nicely in particular with the Keynote application. I use Keynote quite frequently to create our client presentations, and the software was re-worked from the ground up for touch computing. Things like using two fingers to orient or maneuver an image, or pinch and zoom gestures to resize it. Another great example was using 3 or 4 fingers to select slides and re-arrange them as a group without having to command-click each slide, then shuffle them. Web browsing is much nicer with scroll, pan, pinch, and zoom gestures. It is important to keep in mind that it is not that mouse and keyboard computers can’t do the things I am talking about. What is important is that those tasks and many like them are more intuitive and natural with touch computing than with a mouse and a keyboard.

I knew many of the made for iPad applications would be cool – the games, the web browsing, the learning apps, the entertainment apps etc. – but what I did not expect was how profoundly the experience with productivity apps and other core computing tasks would be improved with touch and multi-touch. Again, keep in mind these first applications are barely scratching the surface of what is possible when a mouse is no longer involved.

Mouse and Keyboard a Barrier to Adoption? 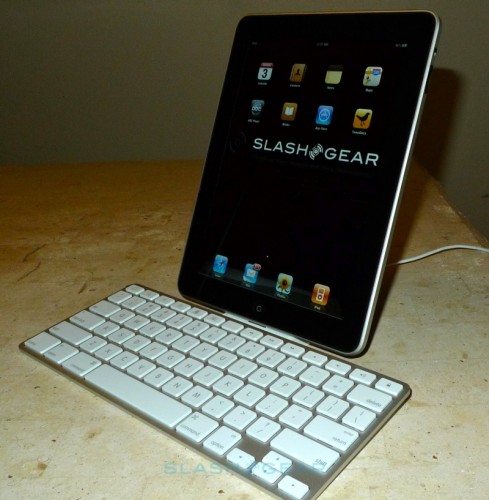 I found myself for writing this article – and for writing very long e-mails – using the iPad dock with an attached keyboard. Even though I was getting quite proficient with the soft keyboard, for long writing the keyboard is still preferred. When using the physical keyboard it was odd at first not having a mouse when I went to press send or navigate the device. However it very quickly became more natural and intuitive to use my finger or fingers to do so many things limited to a mouse before. Touch can do so much more quickly and easily things that took multiple clicks, drags, right clicks, command key holds etc. with a mouse and keyboard.

It is interesting to have observed the barrier to computing that a keyboard and mouse have been for so long. I was always amazed at how older generations stumbled with a keyboard and mouse, or how the biggest hurdle of learning computers for my children was the keyboard and mouse. Even my youngest, who had issues with the mouse and is just learning to read, is operating the iPad with ease and engaging in many learning games she couldn’t on the PC with the traditional peripherals. Think about the developing world and the people who never grew up with computers the way we in America have with a mouse and keyboard. How much more quickly will they embrace touch computing?

Touch computing completely eliminates many of these barriers to computing and at the same time opens up so many new opportunities. The keyboard and QWERTY input is obviously still needed and valuable even in touch computing environments. I would argue that having a soft keyboard that can adapt to the input most relevant for the application is an added benefit of touch computing, but as an input interface it is not being replaced by speech anytime soon. But the mouse and lack of necessity of the mouse is the most profound difference with touch computing. What the mouse represented in navigation, operation, manipulation, and more is now so much more elegantly replaced with touch and multi-touch.

To compete with Apple, makers of mobile devices and tablet-like devices will need to begin re-envisioning computing with touch at the center. Like Apple, many will have to build their hardware and software strategies from the ground up. The result, however, will be touch computing devices that appeal to the masses. Pen computers weren’t for everybody. One can argue that traditional mouse and keyboard computers aren’t for everybody. Touch computers, whether in a pure pocket device or other touch computing platforms, have the opportunity of bringing computing to the masses and opening up a flood of software innovation and opportunity.

Apple ushered in the age of personal computing with the mouse and an intuitive operating system and UI, and they are about to do it again as the iPad brings us into the era of touch computing.