We first mentioned Fring in July of last year. They have been working on an application that rocks videochat on a handheld to something of a new level. Then earlier this month they released the Beta. If this is all new to you like it is to me, they designed an application that will set up a video chat room for up to four people at once. It’s available for both Android and iOS.

Fring released this promo video showing you the way this will allow you to connect with groups of friends to create unique personal moments of joy and beauty. It’s a fun little advertising spot and really does showcase the possibilities with this kind of technology. I especially enjoyed the short scene that implies you should take your friends with you when you’re peeing in public. It reminds me of a friend who would tweet their toilet shenanigans with alarming regularity, pun intended.

One thing I noticed… 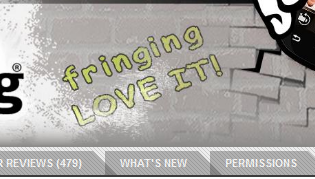 Fringing? Really? It always bothers me when marketers jump forward like that and try mutate their own memes. It always looks and feels hokey and artificial. Listen up, let the meme pools do their work, that’s what they’re for. Google never wanted “google” to be an English verb (publicly anyway), that just evolved naturally out of the language.

Linguistic foibles and tangents aside, this app seems to be a similar tool to Cloudtalk, except Cloudtalk is more focused on asynchronous messaging, where there can be a significant time delay in response. Fring is more about synchronous messaging, where all parties are streaming the video data up and downstream at the same time. This is a good sign for the app ecosystems. These are similar, but slightly different applications that might be competing to fill a similar, but distinctly different, niche. Which do you prefer?