It’s time again to cover your kids’ eyes and make certain you don’t have a heart condition, because the animal you’re about to see is terrifying. This is the Chlamydoselachus anguineus, or “Frilled Shark”, so named for its six pairs of “frill like gills.” One of these beasts was found earlier this month near Lakes Entrance in Gippsland, Australia. This animal is one of two living species from a genus of shark that’s nearly extinct. This family of sharks has existed since the Cretaceous epoch, 72-million years ago.

While it’s not entirely clear how the shark was brought onboard the fishing vessel it was photographed on, fishermen suggest that it would not have survived the drop back into the water once brought above the surface. 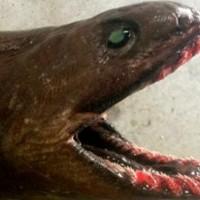 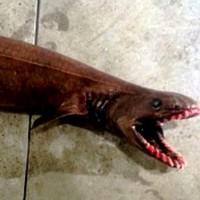 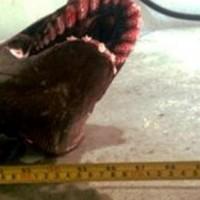 According to SETFIA, the South East Trawl Fishing Industry Association, this specimen was offered to CSIRO, but was turned away because “they already hold specimens.”

Above you’ll see photos captured and shared by CSIRO of the shark captured this month. Video below is of the same species captured at different times and in different places.

The beast you’re seeing here has around 300 needle-like teeth in 25 rows. Because of this massive amount of teeth and alignment of said teeth, not much this shark hunts gets away.

The frilled shark you see above was nearly as long as the longest specimen ever found – or constructed of bones – at 2-meters front to back. All specimens captured have originally had dark brown skin.

Above you’ll see a report on a frilled shark caught in Japan back in 2007. While this shark is rare, it’s not the first time one has been seen or caught on film in the wild in modern times.

Below you’ll see a very good view of a preserved frilled shark at Enoshima Aquarium.