You might not realize virtual reality has an owl problem, but it does. Turn your head while wearing most VR headsets, and the scene you see will move accordingly; flick just your eyes around, however, and nothing happens. Startup FOVE believes it has the answer, a VR rig that can track eye-movement and in the process not only make games and entertainment more immersive, but potentially allow them to be run from something as humble as a smartphone.

To get around the reliance of existing VR headsets – like Oculus Rift and HTC VIVE – on movement of the headset itself, the FOVE team has embedded two infrared cameras into the eyepieces. Mounted just below each lens, and using some clever angling so as to not get in the way of your line-of-sight, they can track pupillary movement. 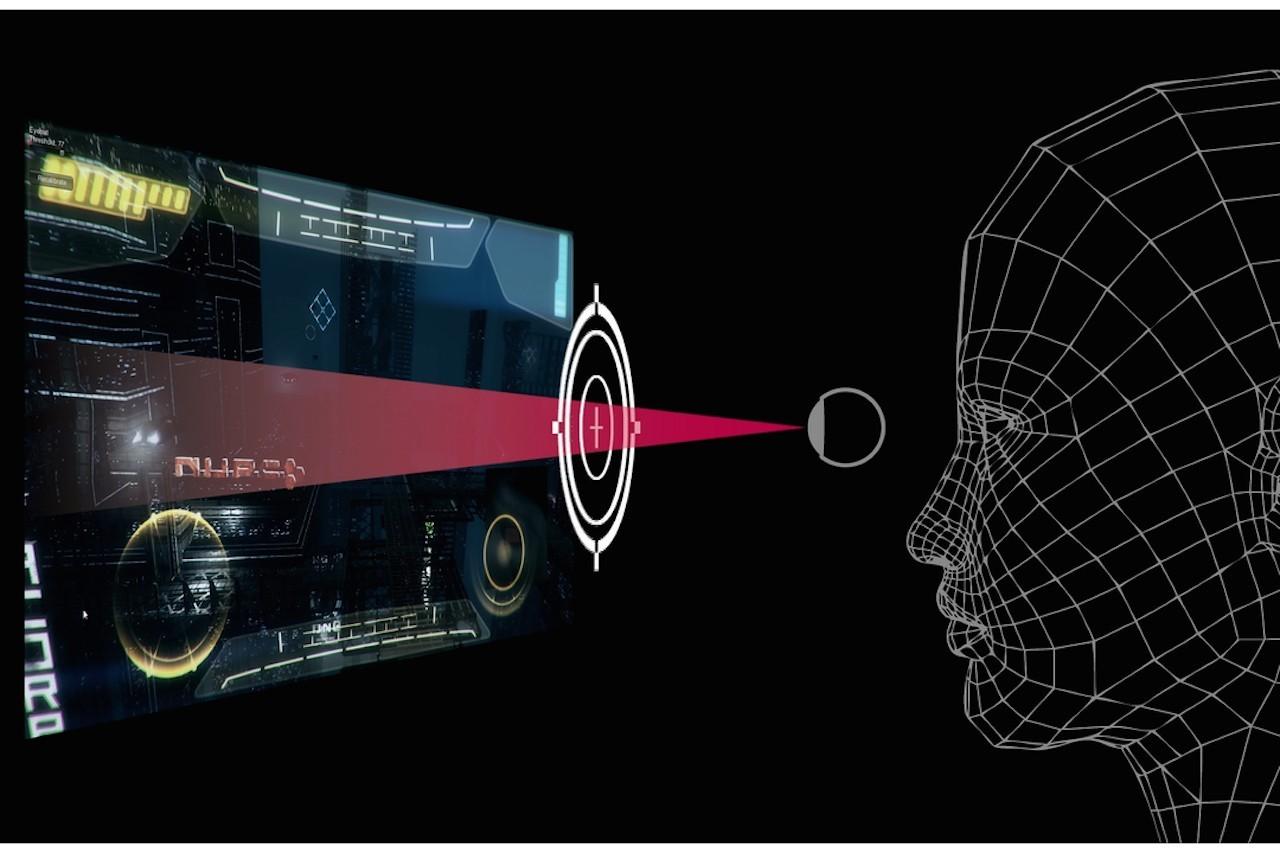 So, the FOVE headset doesn’t just know where you’re facing, it can also figure out whereabouts in the scene your attention is. That opens the door to more than a few possibilities, as I found when I tried FOVE out for myself.

FOVE itself is a large, sculpted plastic headset in white or black, with adjustable straps and a cable sprouting from one of the arms. I’m short-sighted and had to take my glasses off for it to fit me, but managed to see things with only minimal blurring. Those with worse vision than mine (as bad as -2.75 in one eye) might have more trouble, though. 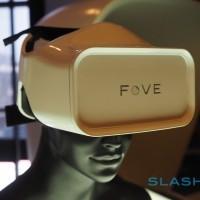 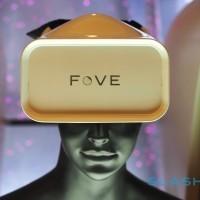 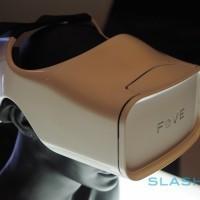 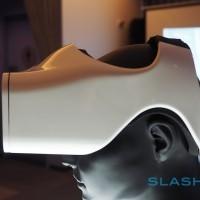 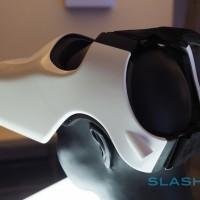 First step is calibration, which involves staring straight at a glowing white dot and then following it around the field of view as it appears in different positions. Eventually, FOVE CTO Lochlainn Wilson told me, the headset will be able to recognize the wearer from their individual eyes and summon the correct calibration settings automatically. 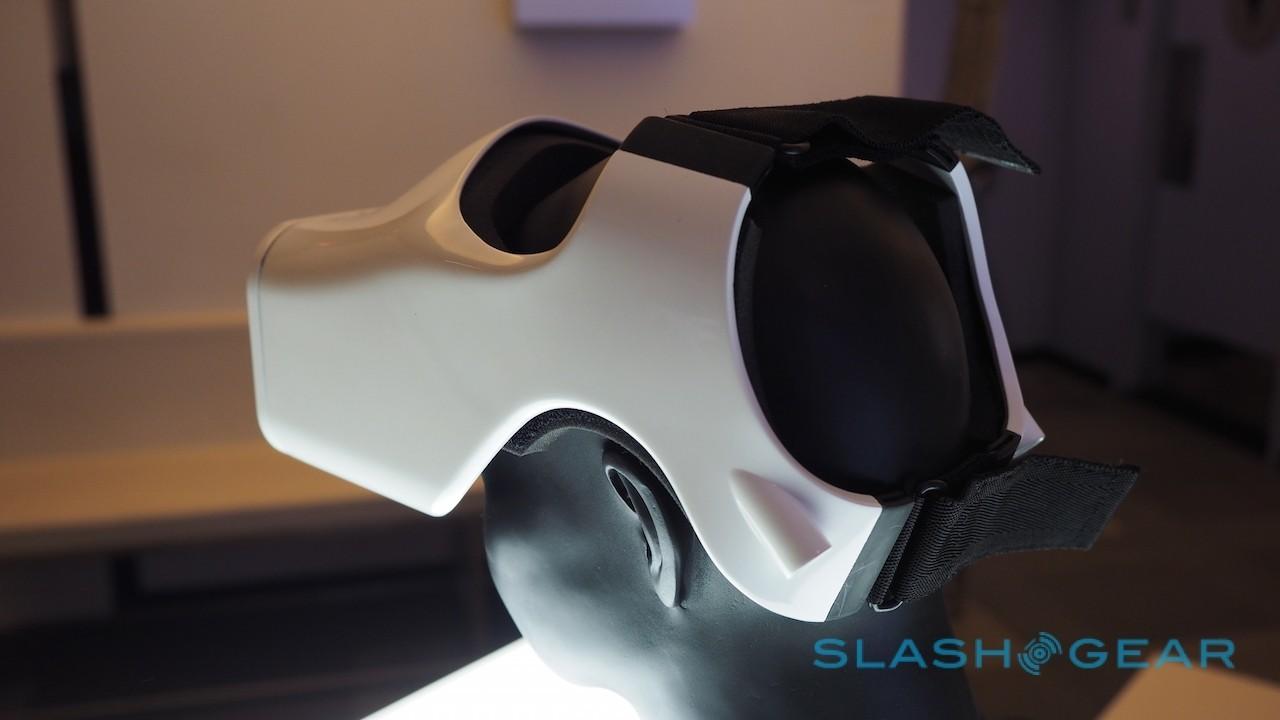 Wilson ran me through a couple of demo apps, each intended to show how eye-tracking can make a difference to the VR experience. Generally, though, it involved using my line-of-sight to target aliens or spacecraft, positioning them in a firing reticle before blowing them up. 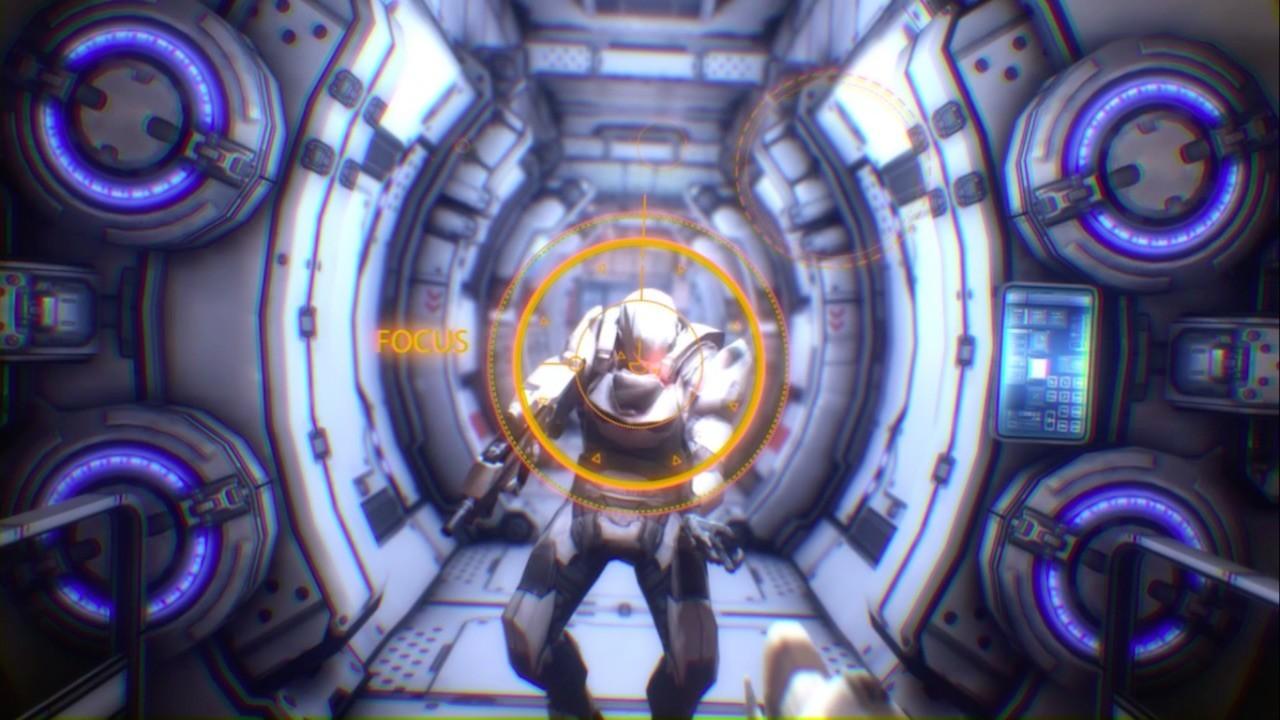 What’s interesting is just how natural it felt almost from the very outset. We’re naturally wired to glance around rather than move our entire head, so it hardly took any familiarization to do that and minimize head movement. Soon I was strafing moving spaceships as they tracked across the scene, turning my head and moving my eyes in tandem to keep enemy craft in the crosshairs.

There’s more to it than simpler ways to kill, however. Text entry with a virtual keyboard could be far more ergonomic, for instance, or using any sort of on-screen controls. 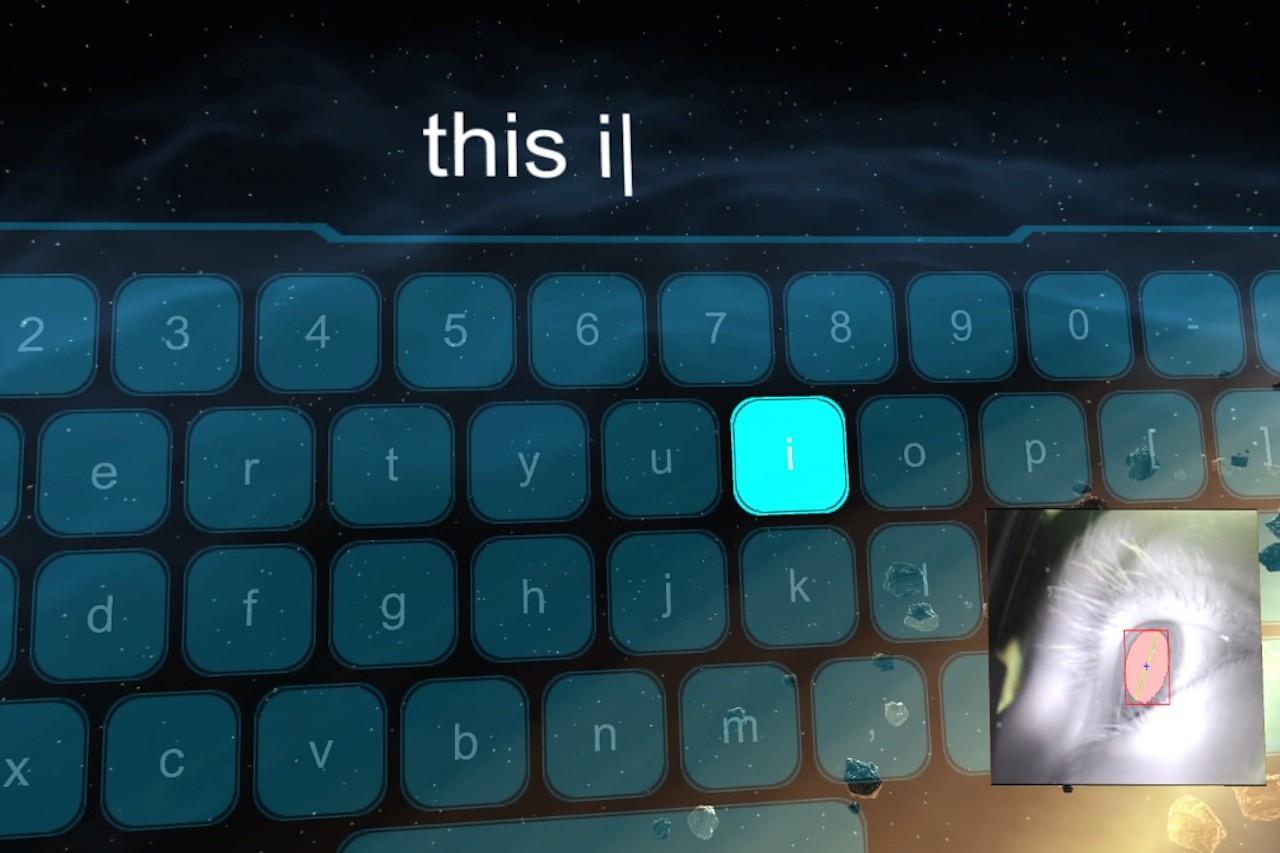 FOVE also expects the tracking to make games and virtual social networking more convincing, since characters will know when you’re making eye-contact with them.

It could also help address one of the biggest concerns in virtual reality now: processing power. Headsets like Oculus Rift place not-inconsiderable demands on the PC they’re connected to, but by focusing the most graphical crunching only where the user is actually looking – FOVE calls it foveated rendering – the GPU demands can be much lower. 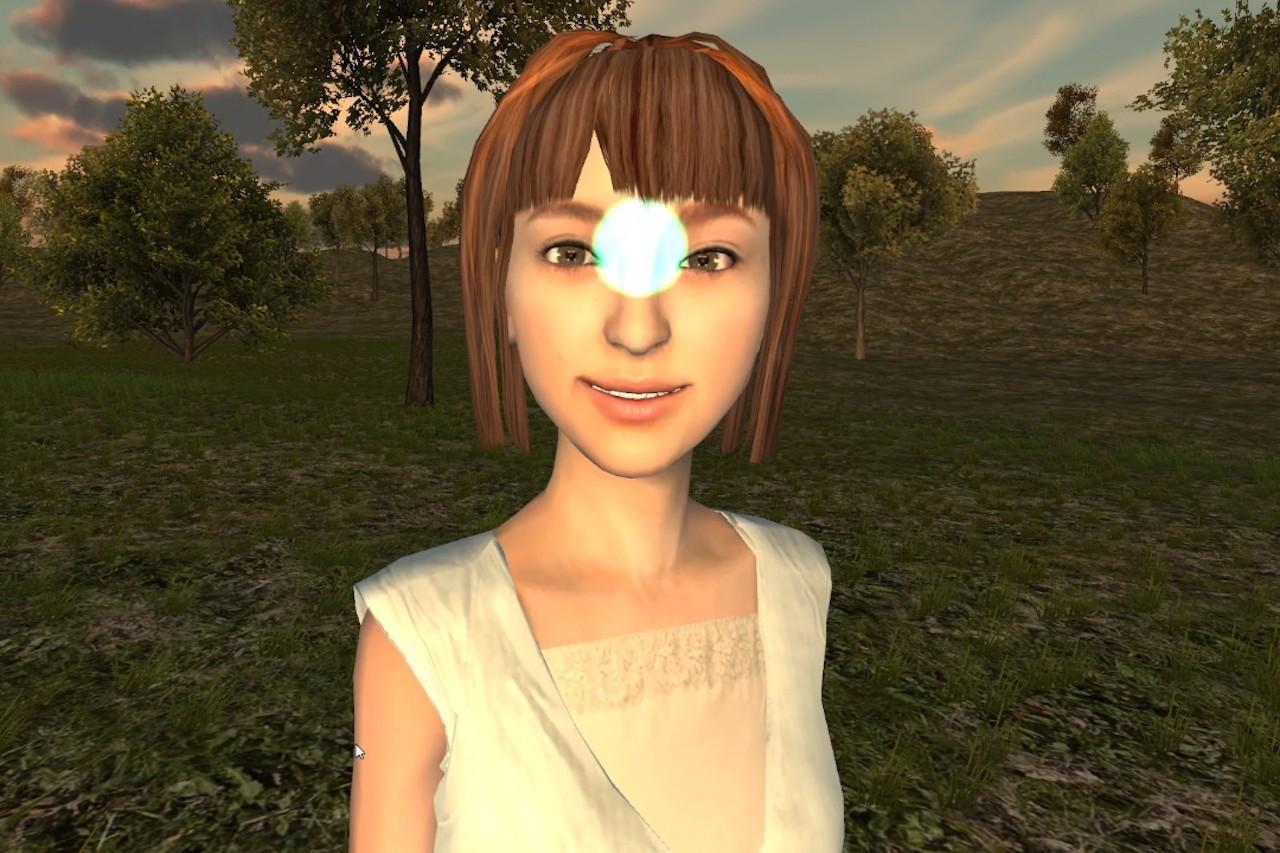 So, even though FOVE has a 5.8-inch 2560 x 1440 panel running at 60fps (though 90fps is the target), the headset needs only around a sixth of the graphics processing of a non-eye-tracing comparative VR rig. Because the human eye sees much less detail in its peripheral vision, only the point being looked at need be at maximum resolution.

The result, CEO Yuka Kojima told me, is the potential to run FOVE from a laptop GPU or even from a smartphone. That’s impressive given the 100+ degree field of view. 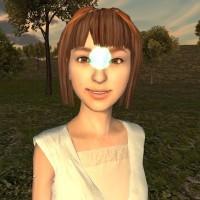 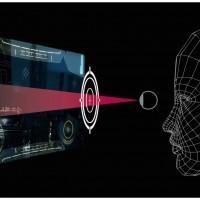 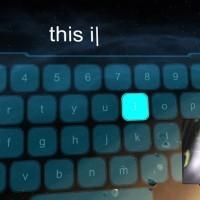 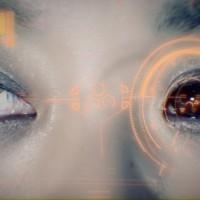 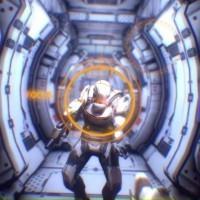 Of course, the big issue with any new platform is convincing developers to get involved. That’s part of the story FOVE was a little shaky on, back when it first showed off its eponymous headset in even earlier prototype form in late 2014.

Now, though, it has come up with an answer, effectively promising a simple SDK to add eye-tracking to Oculus titles, as well as offering support for content created with Unity, Unreal, and Cryengine. 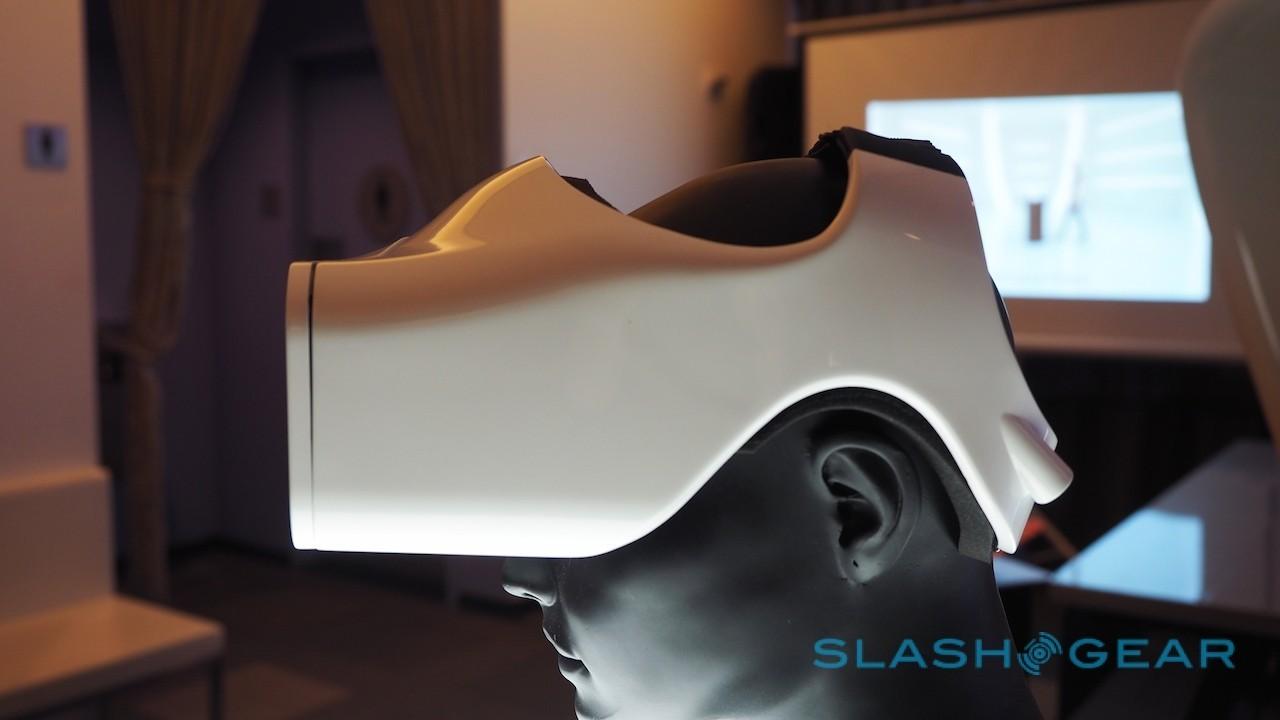 Assuming all goes to plan with the crowdfunding campaign FOVE is using to raise $250,000 and put the developer kits into production, units should be shipped around Q1 2016. The goal is to have the SDK ready before then, though Kojima and the team are open to working with existing developers ahead of time if the software seems a good match for the hardware, and a pilot program will begin with hardware in Q3 this year.

As with any crowdfunded project, and indeed any fledgling gaming product, tempering enthusiasm with a little restraint is sensible. Nonetheless, FOVE’s tracking tech works and, as with previous implementations of eye-tracking I’ve tested, certainly makes for a more involving experience overall. 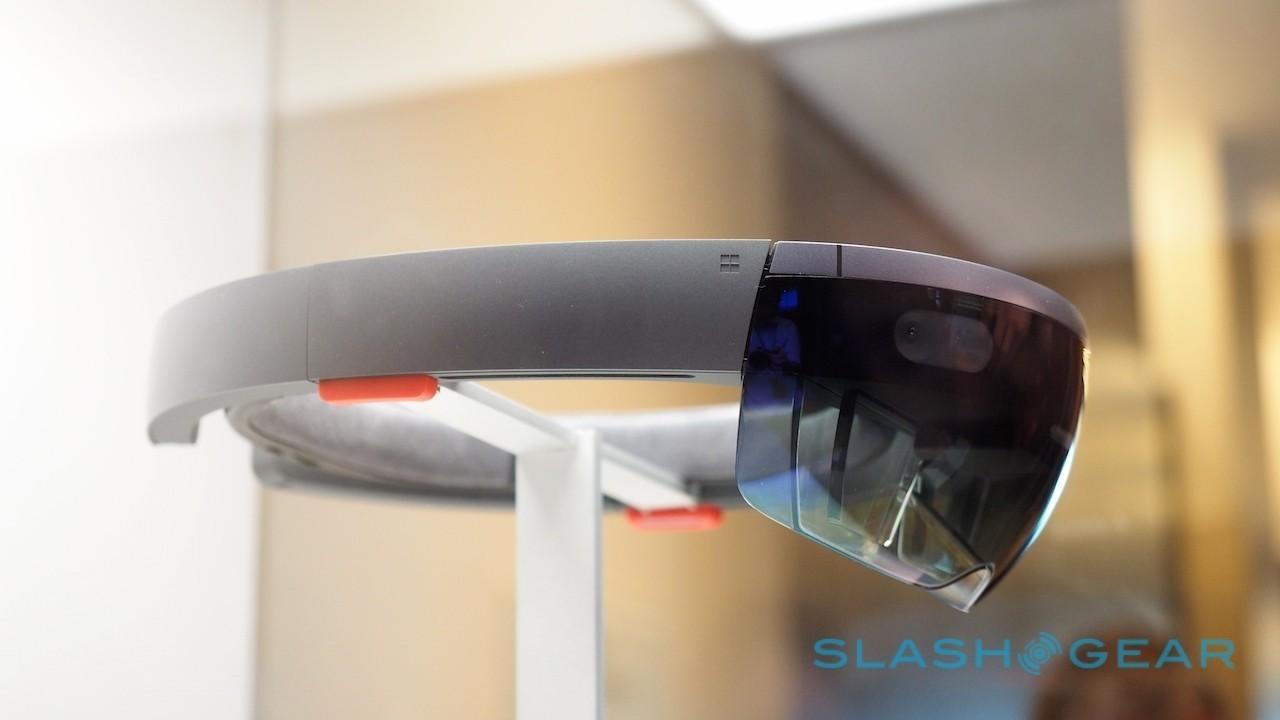 My real enthusiasm, though, is beyond VR. Having tried Microsoft’s HoloLens recently, my appetite for augmented reality has been reawakened. Like most VR headsets, though, HoloLens figures gaze by head movement not eye movement.

There’s nothing technically stopping the integration of FOVE’s technology into an AR headset in the manner of HoloLens, Wilson told me, though the eyepiece would probably have to be a little more enclosed than in Microsoft’s current design so that the IR cameras would work properly. 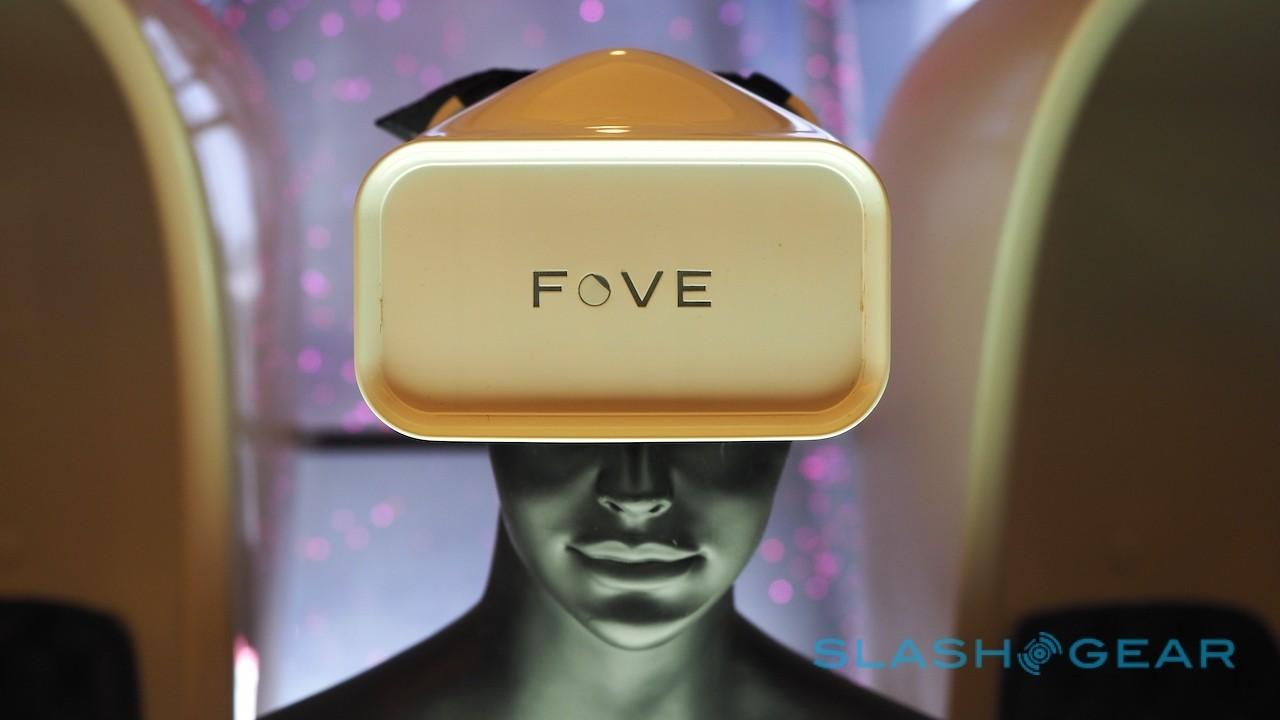 For the moment, the focus is on VR since it’s a more straightforward sell – gamers already understand it – but, Kojima admitted to me, AR could be a possibility in 2-3 years if the market seems open to the idea.

Before that, though, FOVE needs to take off in its current form, and that’ll require a quarter-million from Kickstarter backers. Earlybirds at $349 will get a unit, followed by $399 once the initial 200 pledges are in. 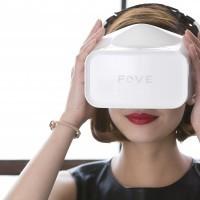 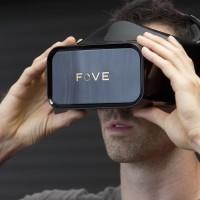 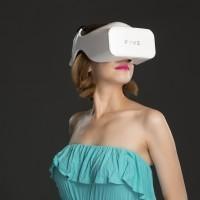 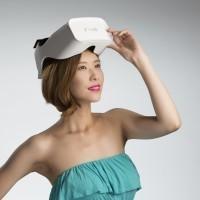 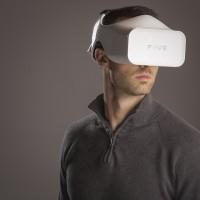 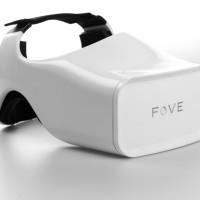 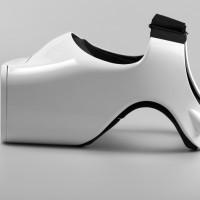 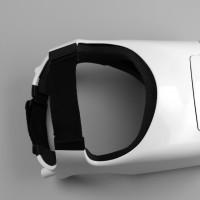 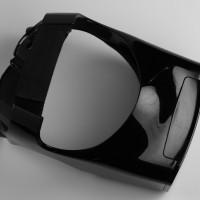 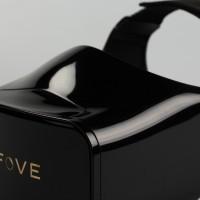